Today, in many parts of the world, Saint Nicholas delivers gifts on the eve of his Feast Day, December 6, and Christmas is reserved for the religious observance of Christ’s birth. It is a positive way to do both the gifts and the religious celebrations, while separating them!  in other places, like the United States the two holidays are intertwined.

The threat of a visit by the Krampus, who accompanied St Nicholas, was a deterrent to bad behavior. Think of the Grinch with a really, really bad temper and you are getting close. He gained popularity (if that’s what you can call it!) outside of the remote isolated Alpine areas in Northern Europe, due in part to the popularity of 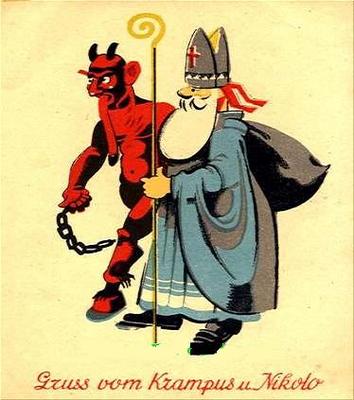 Christmas cards portraying him in the late nineteenth and early twentieth centuries.

My father, who grew up during World War I without a father, because he was off at war and never came home, in a small Alpine town outside of Linz, Austria told stories of St. Nickolas arriving on cross-country skis with the Krampus on a chain, often to homes where mothers were having problems with unruly children, especially boys. Most had an immediate attitude change after just seeing him, but there were stories of the Krampus tossing particularly incorrigible kids into his black sack and taking them on a harrowing ski ride from which all returned calmer and more agreeable children… at least for awhile. Some kids who had not been quite bad enough to deal with the Krampus, but were on the edge, would just hear the rattling of his chain as St Nickolas left them a lump of coal instead of goodies.

If you’ve never read Der Struwwelpeter (Struwwelpeter in English Translation) then you don’t know what you’re missing. It’s a children’s book which uses stories and wonderful illustrations to suggest that misbehavior is likely to end in disaster and even death. It’s a wonderful tool, but probably a little too politically incorrect for some these days.

There are those who complain about the “commercialization” of the Christmas season and that commercialism can detract from the holiday’s religious roots..

However, we must remember that Christmas has always been more than just a religious holiday. Today it is more secular than during some times in the  past, but it has always been celebrated with gifts and other festivities, and often with little regard to religion. And it should be remembered that the message of peace, brotherhood and good will which is central to the Christmas season is a message everyone can appreciate.

As to commercialization, we must also remember that St. Nicholas came from a wealthy family and did not hesitate to use his wealth to purchase the things he gave to those in distress. For the past seventeen centuries, parents have honored him by buying gifts on his feast or on Christmas and secretly giving them to their children as gifts from St. Nicholas.

In countries like Germany and Austria where they celebrate the entire Christmas Season from Advent to the Holy 3-Kings Day or the Epiphany (December 2nd through January 6th) there are many celebrations and much family time, on-going gifts and fun as well as plenty of time for those who remember what Christmas is really about: to worship, reflect, be grateful and celebrate the birth of Jesus.

Many of the purists or traditional conservative Christians dislike the meshing of Christianity and the old pagan festivals. In countries where children have a good grounding in their faith and family, the pagan and commercial additions add a little fun without distorting the true meaning of the season. It is in modern society, including present day Europe and America, where children and people in general have lost their grounding and understanding of their faith and history and embrace only the fun, where these extras or the blending have become a problem.

“One of the problems we have in this country is that too many adults believe in Santa Claus, and too many children don’t! …Lee Lauer

So Where Is the War on Christmas Coming From? – A Worthwhile Read!

Advent – The Season of Anticipation and Hope

A great read: Losing Our Religion: The Liberal Media’s Attack on Christianity

I am a babyboomer and empty nester who savors every moment of my past and believes that it is the responsibility of each of us in my generation and Americans in general to make sure that America is as good or even a better place for future generations as it was for us. So far... we haven't done very well!! Favorite Quotes: "The first 50 years are to build and acquire; the second 50 are to leave your legacy"; "Do something that scares you every day!"; "The journey in between what you once were and who you are becoming is where the dance of life really takes place". At age 62 I find myself fighting inoperable uterine Cancer and thanks to the man upstairs and the prayers from so many people including many of my readers from AskMarion and JustOneMorePet... I'm beating it. After losing our business because of the economy and factors related to the re-election of President Obama in 2012 followed by 16-mos of job hunting, my architect-trained husband is working as a trucker and has only been home approximately 5-days a month since I was diagnosed, which has made everything more difficult and often lonely... plus funds are tight. Our family medical deductible is 12K per year for two of us; thank you ObamaCare. But thanks to donations from so many of you, we are making ends meet as I go through treatment while taking care of my father-in-law who is suffering from late stage Alzheimer's and my mother-in-law who suffers from RA and onset dementia as well as hearing loss, for which there are no caretaker funds, as I continue the fight here online to inform and help restore our amazing country. And finally I need to thank a core group of family, friends, and readers... all at a distance, who check in with me regularly. Plus, I must thank my furkids who have not left my side through this fight. You can see them at JustOneMorePet.
View all posts by Ask Marion →
This entry was posted in Family and Friends, Food and drink, Holidays, Religion and Faith, Tradition and tagged American Traditions, American values, Charity, Christmas, Der Struwwelpeter, Hanukah, holidays, Krampus, Santa Claus, Sinterklass, Spirit of Christmas, St Nickolas, The War on… The War on Christmas, war on Christianity, War on Christmas, War on Religion. Bookmark the permalink.