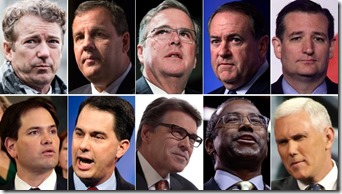 The Republican bench is deep and wide!!  The Democrat Party has Hillary… yesterday’s politician, equally old and problematic Elizabeth Warren, old self avowed socialist Bernie Sanders and a couple stragglers.  So the 2016 elections, especially after the GOP’s landslide in 2014, should be theirs.  So why should the GOP and independents be worried?  Because the Republicans lack cohesiveness and a strategy, plus they have let the Dems get far ahead of them in the use of technology and, however often underhanded, at getting out the vote!

The Republican leadership has made some positive progress by changing the date of their Convention and by cutting back on their primary debate schedule; both of which harmed them in 2012.

But what needs to happen is the development of a unification attitude, stopping the infighting, stopping the character bashing during the debates and primaries and developing the common sense attitude that after the primary battles are over, both the party and the Republican voters need to stand by the party and its choice by both voting and by helping to get out the vote, even if their standard bearer is not the exact person they wanted.  Sometimes voting against the opposition party or candidate is just as important as voting for the person you wanted but didn’t get the nomination.

What cannot happen is that Christians stay home because, like in 2012, Mitt Romney was a Mormon… not the right kind of Christian or that conservatives or independents stay home because the GOP’s candidate is not conservative enough… or a little too conservative, because the result will be a Hillary Clinton presidency, something America cannot survive after 8 years of Barack Hussein Obama at the helm.  The time to fight for the ‘perfect’ candidate of your choice is during primary season. But in the end, the disagreement in one or two areas cannot keep voters away from turning out to vote for a generally good or acceptable candidate.  Republican voters need to keep their eye on the prize and remember the cost of not doing so.

In November 2014 the Washington Examiner ran a piece entitled: GOP eyes 32 presidential candidates including Cruz, Palin, Ron Paul… Walker, Rand Paul, Rubio, Trump, Rice and the list goes on… ‘Virtually’ every one of them, on the possible 2016 GOP candidate list, would do a better job than Hillary Clinton!  Often a party change in the White House alone, after 8 tough years, brings with it a sweeping breath of fresh air.

Put all the would be Presidential candidates in a room and don’t let them out until they have decided who among them should run for President and Vice President and who should staff the various departments of government. Then let them all go out and tell the American public what they are going to do to straighten out the country instead of beating each other up in the primaries and providing cannon fodder for the Democrats. If that doesn’t create winners in 2016 the country is too far gone.

Hmmm… sounds a lot like the strategy of our own Trevor Loudon!! (Great Team… Although not ‘exactly’ my choice for the top spots, a team I could support!)

Another thing Republicans need to stop doing is determining that the person they want cannot win because the media has fed them that idea.  It is the same propaganda the media has used to convince the American people that a Hillary presidency is inevitable.  A Hillary presidency is not written in stone.  Hillary is not a good candidate.  She is yesterday’s politician and not charismatic.  She has much dirt, baggage and scandal in her political and personal past.  And even Hillary’s closest friends and advisors have a hard time coming up with a single accomplishment when asked for the highlights of Hillary’s tenure as Secretary of State.  Sarah Palin on the other hand is a good candidate.  She is also younger, more energetic and is charismatic.  Palin has been vetted and would be the GOP’s best answer to Hillary.  Our toughest woman against theirs contest, negating the “electing the first female president” carrot.  Plus her background is filled with accomplishments and her only scandals were fabricated; all of which she has been vindicated of.  Palin is experienced, has a long list of accomplishments as Governor of Alaska, knows energy as the former Chairman of the Alaska Oil and Gas Conservation Commission, and has both integrity and common sense… a commodity in short supply in Washington.  Hillary is scrambling for legitimacy, as her scandal list continues to grow and is a Washington insider.  It would be the battle of the Century.

Beyond this the Republican party needs to be studying up on some history.

The Republicans in the 114th Congress have learned the lessons of 1948. Their recent moves – the Netanyahu invitation and the Iranian letter – are a way to position the Democratic Party as soft on Islam. They were calculated political acts in anticipation of the 2016 general election. It could work for them unless Obama uses his Zen Master skills. Obama has a year to introduce legislation that they will have no choice but to support. If he’s as smart as Harry Truman, he’ll find a way.

And the Zen masters and financiers from both parties are already busy orchestrating the election from their perspectives.  If Americans do not want them making their choice for them, everyone must get involved now… during the primaries, but do their own homework before.

But in the end, if you don’t get your voters to the polls it all really doesn’t matter.

Bottomline the GOP needs to stop eating its own and run against Hillary or whomever the Dems run instead of tearing down each other; needs to study history; and needs to ramp up their technology. They also need to train-up their grassroots forces to get out the vote and their presidential candidate (as well as their gubernatorial,  congressional and senatorial candidates) need to delineate clear and definite plans.  Plus Republican and Republican leaning voters need to vote with their heads as well as with their hearts and need to vote against the Dems and Hillary if they can’t vote for the Republican candidate.

America has too much at stake for anyone to sit the 2016 Election out.  Everyone needs to vote, but not until they have done their homework.

I am a babyboomer and empty nester who savors every moment of my past and believes that it is the responsibility of each of us in my generation and Americans in general to make sure that America is as good or even a better place for future generations as it was for us. So far... we haven't done very well!! Favorite Quotes: "The first 50 years are to build and acquire; the second 50 are to leave your legacy"; "Do something that scares you every day!"; "The journey in between what you once were and who you are becoming is where the dance of life really takes place". At age 62 I find myself fighting inoperable uterine Cancer and thanks to the man upstairs and the prayers from so many people including many of my readers from AskMarion and JustOneMorePet... I'm beating it. After losing our business because of the economy and factors related to the re-election of President Obama in 2012 followed by 16-mos of job hunting, my architect-trained husband is working as a trucker and has only been home approximately 5-days a month since I was diagnosed, which has made everything more difficult and often lonely... plus funds are tight. Our family medical deductible is 12K per year for two of us; thank you ObamaCare. But thanks to donations from so many of you, we are making ends meet as I go through treatment while taking care of my father-in-law who is suffering from late stage Alzheimer's and my mother-in-law who suffers from RA and onset dementia as well as hearing loss, for which there are no caretaker funds, as I continue the fight here online to inform and help restore our amazing country. And finally I need to thank a core group of family, friends, and readers... all at a distance, who check in with me regularly. Plus, I must thank my furkids who have not left my side through this fight. You can see them at JustOneMorePet.
View all posts by Ask Marion →
This entry was posted in Americana, Choices, Conservatives, Constitution, Elections, Freedom, Get Involved, History, Knowledge Is Power, Media, News and politics, Politics, Thoughts ..., Wake Up and tagged 2016 Election, Candidagtes, Election 2016, elections, GOP, GOP strategy, Hillary, Palin, Republicans, Strategies, vote, winning. Bookmark the permalink.