Palinmania and Why She Can Win 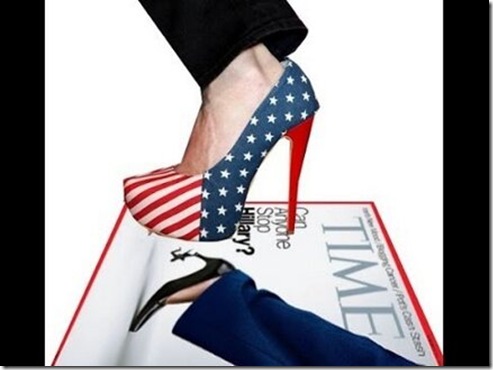 What is the old saying? I don’t care what you say about me; just spell my name right!  If you are famous there is a lot of truth in that statement. Name recognition is often more important than the message or the news. And there is nobody that gets more press, good and bad, than Sarah Palin.  The first reaction by many would be, “Well, most of the news about Sarah Palin is negative!”  In reality most of the press about Hillary is also negative even with her cover from the lamestream media and the Clinton machine.  The difference is that most of the negative about Hillary is true whereas most of the negative press about Sarah is false, exaggerated or spun, plus the Democrats promote and support Hillary no matter what and have buried some pretty awful stuff, just like they have for her husband for the past 40-years.  But the Republicans, instead of capitalizing on their answer to Hillary Clinton or Elizabeth Warren do not protect or defend Sarah Palin but instead often even jump on the bandwagon.

If Sarah Palin had been Secretary of State in Hillary’s place she would have been dubbed the Benghazi Butcher, but since it was Hillary the entire fiasco and cover-up was written off as business as usual, spun as not Hillary’s fault and even sold to the American people as being caused by a video.

In 1996 Hillary had a Brain Williams moment (and not her only one) claiming she remembered landing in Bosnia under sniper fire and telling everyone, “There was supposed to be some kind of a greeting ceremony at the airport but instead we just ran with our heads down to get into the vehicles to get to our base.” In fact she was greeted by this sweet little blond girl (pictured above) and the people standing around them… yet nobody asked her to resign. Instead, the Dems with the media’s help swept it under the carpet.  (Clinton finally admitted in 2008 that she had misspoken.  Really?  Misspoken? Sounds a lot more like either another Clinton lie or brain damage!?!) Sarah had an off day at the Iowa Freedom Summit when her teleprompter broke and didn’t do her usual amazing job adlibbing and she was ripped to shreds by not only the media, the Dems and the GOP Establishment but even some of those who are her supporters voiced their doubts because she didn’t dazzle them for once.  When is the GOP going to stop eating its own?  And what is wrong with conservatives that can’t stand by their girl through a weak or confusing speech?

Sarah Palin is ratings gold!  That is why she was asked to join the SNL 40th Anniversary Bash team and she stole the headlines show!!  Just like she steals the show at political rallies at both Republican and Tea Party events across the country, including in Searchlight, Nevada… Harry Reid’s hometown.

Sarah Palin gets Pop Culture.  She also gets Americana!  And Palin is willing to stand-up and fight for freedom, the Constitution and for average Americans… for you and me! (See The Undefeated trailer; a movie everyone should see before dismissing Palin as a candidate.) No matter what the fallout or whether she is speaking to a friendly audience or not, Sarah Palin is willing to make her case.  Both Palinmania and Palin Derangement Syndrome swept the country in 2008 and the phenomenon has never ceased.

My husband and I were lucky enough to hear and see Sarah Palin speak live, at her first Rally in Cali , not long after she had been tapped as John McCain’s running mate. She was mesmerizing and both inspired and energized the crowd of about 23,000 people. She was introduced and supported by the Los Angeles President of NOW (the National Organization for Women), a lifetime Democrat and political convert as she introduced herself… until sometime later the powers that be within her group convinced her otherwise. Many people have forgotten that soon after Sarah was chosen for VP that she and McCain were ahead until McCain decided to suspend the campaign and trudged back to Washington, D.C. because of the financial crisis. Had that not happened or maybe even if McCain had just not headed back to D.C., he and Palin could very well have won! What a different America we would be living in, if that were the case!  Greta Van Susteren pulled out the old polls.

Earlier in the week, before Palin rubbed elbows with the generally progressive SNL crowd, she received multiple standing ovations at the Houston Energy Summit as well as speaking to a near capacity crowd in Midland Texas as part of the John Ben Shepperd Public Leadership Institute Distinguished Speaker Series, speaking on the topic “Groundbreakers, Mavericks and Trailblazers: How Women Are Showing 21st Century Leadership.” Think about it, does the GOP really want the Dems to run the first female candidate for president as they did the first candidate for VP?  Sarah Palin was the second.  Or elect the first female US president?

Before Sarah Palin was Governor of Alaska [and after she was term limited out as Mayor of Wasilla] she was Chairman of the Alaska Oil and Gas Conservation Commission. One of the most powerful jobs in Alaska, and the oil and gas industry as a whole.

Once elected Governor, Palin was then elected Chairman of the nation’s Interstate Oil and Gas Compact Commission, which comprises all of the oil and gas producing states in America. The National Governors Association, comprised of Governors from all 50 states elected Palin as Chairman of their Natural Resources Commission.

Palin is a recognized expert on oil and gas production and has been involved in exploration and developing best practices and ethics for the industry.

She is quite famous for taking on Big Oil, numerous times. So much so, industry insiders wrote the best seller “Sarah Takes On Big Oil’

There are three things that matter in an election.  The people who vote which is a small percentage of the population; getting out the vote for your side; and who counts and verifies the vote.

Sarah Palin is the best candidate that the Republicans could put up against Hillary or Elizabeth. She is the answer to the Democrat’s carrot of electing the first female president and is vetted beyond what most politicians can even imagine.  The question is not whether Sarah Palin could win or whether she is up to running in 2016.  The question is can the GOP, including the Tea Party, get out of their own way!?!

It Does Make A Difference To Hillary… Now

GOP Poll: Sarah Palin, Not Yet a Contender, Most Liked by GOP for 2016

Sarah Palin: Obama is a LIAR ON ENERGY

Sarah Palin: Would Love to See Two Women Run in 2016

I am a babyboomer and empty nester who savors every moment of my past and believes that it is the responsibility of each of us in my generation and Americans in general to make sure that America is as good or even a better place for future generations as it was for us. So far... we haven't done very well!! Favorite Quotes: "The first 50 years are to build and acquire; the second 50 are to leave your legacy"; "Do something that scares you every day!"; "The journey in between what you once were and who you are becoming is where the dance of life really takes place". At age 62 I find myself fighting inoperable uterine Cancer and thanks to the man upstairs and the prayers from so many people including many of my readers from AskMarion and JustOneMorePet... I'm beating it. After losing our business because of the economy and factors related to the re-election of President Obama in 2012 followed by 16-mos of job hunting, my architect-trained husband is working as a trucker and has only been home approximately 5-days a month since I was diagnosed, which has made everything more difficult and often lonely... plus funds are tight. Our family medical deductible is 12K per year for two of us; thank you ObamaCare. But thanks to donations from so many of you, we are making ends meet as I go through treatment while taking care of my father-in-law who is suffering from late stage Alzheimer's and my mother-in-law who suffers from RA and onset dementia as well as hearing loss, for which there are no caretaker funds, as I continue the fight here online to inform and help restore our amazing country. And finally I need to thank a core group of family, friends, and readers... all at a distance, who check in with me regularly. Plus, I must thank my furkids who have not left my side through this fight. You can see them at JustOneMorePet.
View all posts by Ask Marion →
This entry was posted in Conservatives, Get Involved, Knowledge Is Power, Leadership, Lies, Media, News and politics, Politics, Progressivism, Thoughts ..., Wake Up and tagged Democrat party, energy, GOP, Hillary, Hillary Clinton, lies, Palin, Republican Party, Sarah, Sarah Can Win, Sarah Palin, speeches, tea party. Bookmark the permalink.

21 Responses to Palinmania and Why She Can Win