Todd Palin, husband of Sarah Palin and four-time champion of the Tesoro Iron Dog, the world’s longest snowmobile race, which traces the path of the Iditarod race with an extra journey of several hundred miles to Fairbanks added, has dedicated his 2015 Iron Dog run to hero Chris Kyle, as Governor Sarah Palin Reprises Her Commander-in-Chief Role and Honors Veterans at CPAC 2015 with a speech honoring veterans. 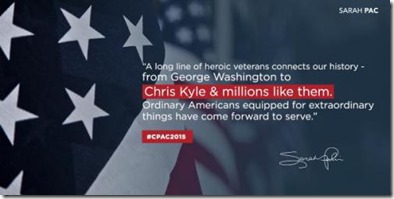 “And then it was an honor for me and others to participate in  “Stars Earn Stripes”  with Chris and others in the military. You can have a conversation with somebody but until you’re side-by-side in the trenches with somebody, then you really know somebody. These guys, being a sniper, being out ahead of his unit and saving lives, Chris was just a good man, an expert in his field and he was one heck of a teacher.”

Palin also spoke about his own personal experience as the father of a military man.

“As father and mother, Sarah and I witnessed our son [Track] go through boot camp. It’s just an unbelievable process. You have an 18-year-old go down to boot camp and then you go down there a few months later when they graduate from boot camp and they’re just mentally strong, physically strong and have all the respect in the world for their drill sergeant because their drill sergeant is right next to you climbing up that mountain or running the five miles. But it just shows years of training, dedication and protecting freedom and liberty. That’s the motto of our military.”

Not only is Todd Palin a local hero and Iron Dog champion, but the Palins also run a mix of lead and team dogs for the Iditarod, touted as the Last Great Race on Earth.  In fact, Todd, the former first dude of Alaska and Governor Palin Generate $189 Million+ Yearly in Alaskan Tourism They motivate 44% of tourist travel to the state and the former governor’s favorable number is 21 points higher among Alaska tourists than the general public.  Wouldn’t it be great if they could generate that type of tourism to Washington, D.C.?

While many in the contiguous 48 states will be watching the Daytona 500 and the Oscars Sunday, the eyes of Alaska focus on the Iron Dog.

The grueling snowmachine race has been going strong since 1984.  For the 22nd time, former Alaska First Gentleman Todd Palin competes.

Palin has won the race four times and he’s teaming for a second straight year with Tyler Huntington. The duo, Team 11, honors an American hero in the process. Todd Palin races in support of the Chris Kyle Frog Foundation, with a snowmachine decked out in a patriotic decal that pays homage to one of the greatest snipers America has ever known.

“It was just an honor to spend time with Chris Kyle,” Palin told The Palin Update with Kevin Scholla on Mama Grizzly Radio. “I think that the success of (American Sniper) just shows that Americans have been waiting to be able to lift that hero up. It’s been huge”

Before embarking on the 2015 Iron Dog Race  and gunning for his fifth championship. Todd and Kevin discussed the weather conditions, what it takes to win, and how Chris Kyle lives on through this grueling event. The show also included Sarah Palin showing off her comedy chops at SNL’s 40th Anniversary Show and tells you why Alaskans are smiling ear to ear. There is also, a brand new segment of Liberty & Legacy with Tamara Colbert in Texas and Steel Resolve; their weekly commentary with Sarah Steelman in Missouri is showcased.

Bristol Palin wrote, “So proud of Dad and his desire to honor Chris. Go, Dad, go!”

Updated on 03.01.15:  Faeo, Quam won the bruising Iron Dog snowmachine race in which:

The runners-up were Anchorage’s Aaron Bartel and Davis, of Soldotna, who finished 46 minutes later and won $35,000 for the showing. Allen Hill, of Big Lake, and McKenna, of Anchorage, claim $20,000 for the their third-place finish.

Quam, 44, said not many racers his age win the grueling Iron Dog, and that he relied on the energy that Faeo, 31, injected into the team. Faeo said Quam’s trail savvy provided a crucial balance.

“Eric’s been awesome,” he said. “A guy with a lot of experience, a great rider. I’ve learned a ton from him this year.”

I am a babyboomer and empty nester who savors every moment of my past and believes that it is the responsibility of each of us in my generation and Americans in general to make sure that America is as good or even a better place for future generations as it was for us. So far... we haven't done very well!! Favorite Quotes: "The first 50 years are to build and acquire; the second 50 are to leave your legacy"; "Do something that scares you every day!"; "The journey in between what you once were and who you are becoming is where the dance of life really takes place". At age 62 I find myself fighting inoperable uterine Cancer and thanks to the man upstairs and the prayers from so many people including many of my readers from AskMarion and JustOneMorePet... I'm beating it. After losing our business because of the economy and factors related to the re-election of President Obama in 2012 followed by 16-mos of job hunting, my architect-trained husband is working as a trucker and has only been home approximately 5-days a month since I was diagnosed, which has made everything more difficult and often lonely... plus funds are tight. Our family medical deductible is 12K per year for two of us; thank you ObamaCare. But thanks to donations from so many of you, we are making ends meet as I go through treatment while taking care of my father-in-law who is suffering from late stage Alzheimer's and my mother-in-law who suffers from RA and onset dementia as well as hearing loss, for which there are no caretaker funds, as I continue the fight here online to inform and help restore our amazing country. And finally I need to thank a core group of family, friends, and readers... all at a distance, who check in with me regularly. Plus, I must thank my furkids who have not left my side through this fight. You can see them at JustOneMorePet.
View all posts by Ask Marion →
This entry was posted in Americana, Events, Family and Friends, Freedom, Fun, Leadership, News, Remembering, Sports and Competition, Travel and tagged Alaska, Chris Kyle, heroes, Iditarod, Iron Dog, military, Palin, Races, Sarah Palin, the Palins, Todd Palin, veterans. Bookmark the permalink.