The GOP Has Just Picked Up Another Senate Seat

Federal district court refused to grant the injunction in NC

Republicans already have three for sure senate pickups in the mid terms in West Virginia, Montana, (Dem. John Walsh just dropped out over a plagiarism scandal) and South Dakota.

A federal court ruling today has likely added North Carolina to the list.

Eric Holder and the Obama Department of Justice have fought every attempt by the states to combat voter fraud tooth and nail. Last month, the Justice Department requested an injunction to prevent the state of North Carolina from implementing changes the North Carolina State legislature made to state election law, including strict voter ID laws to combat voter fraud and ensure more honest elections.

Today, a Federal district court refused to grant the injunction,which means that the new laws will remain in place through the midterms, and Democrat incumbent Nina Hagen, already trailing in the polls to Republican Thom Tillus has sustained a major blow to her re-election hopes.

The provisions are almost a checklist for honest elections. From the opinion:

Apart from the voter ID provisions, which were new, the bill largely purported to repeal, amend, or update existing law. Other amendments included:
(1) making it illegal to compensate persons collecting voter registrations based on the number of forms submitted (Part 14);
(2) reducing the number of signatures required to become a candidate in a party primary (Part 22);
(3) deleting obsolete provisions about the 2000 census (Part 27)
(4) changing the order of candidates appearing on the ballot (Part 31);
(5) eliminating straight-ticket voting (Part 32);
(6) moving the date of the North Carolina presidential primary earlier in the year (Part 35);
(7) eliminating taxpayer funding for appellate judicial elections (Part 38);
(8) allowing funeral homes to participate in canceling voter registrations of deceased persons (Part 39); and
(9) requiring provisional ballots to be marked as such for later identification (Part 52).
The bill also proposed mandating that several matters be referred for further study, including requiring the Joint Legislative Oversight Committee to examine whether to maintain the State’s current runoff system in party primaries. (Part 28.)

The court held that, although the court didn’t justify simply dismissing the DOJ lawsuit, the attorneys for the plaintiffs failed to show clearly the legal merits of their claims or that they would suffer irreparable harm before trial if an injunction wasn’t granted.

Tom Fitton of Judicial Watch, whose organization helped defend the law said,  “It is an embarrassing defeat for the Holder Justice Department. The court’s decision eviscerates Eric Holder’s politicized and racially inflammatory legal assault on commonsense election integrity measures. The court expressly rejected the Department of Justice’s contention that minorities are harmed by commonsense measures that help secure honest elections. The court’s dramatic rejection of Holder’s legal theory shows that that the DOJ’s lawsuit, which was coordinated with political activists at the White House, was always more about cynical political and racial appeals than upholding the law.” 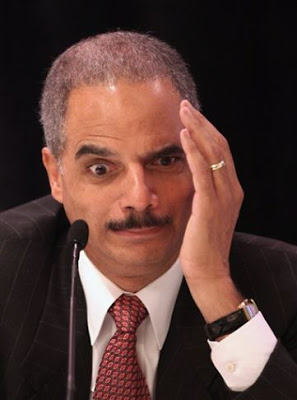 The Wisconsin voter ID law, which was struck down by a partisan judge in Dane County is likewise proceeding through the justice system and the North Carolina decision makes it fairly likely the issue will proceed to the Supreme Court. It far too early to bring out the champagne yet, but we may yet see a time when Democrats are unable to prevail using illegal aliens, felons and the deceased to win elections.

Forum: What’s Your Prediction For The House And Senate Midterms?

I am a babyboomer and empty nester who savors every moment of my past and believes that it is the responsibility of each of us in my generation and Americans in general to make sure that America is as good or even a better place for future generations as it was for us. So far... we haven't done very well!! Favorite Quotes: "The first 50 years are to build and acquire; the second 50 are to leave your legacy"; "Do something that scares you every day!"; "The journey in between what you once were and who you are becoming is where the dance of life really takes place". At age 62 I find myself fighting inoperable uterine Cancer and thanks to the man upstairs and the prayers from so many people including many of my readers from AskMarion and JustOneMorePet... I'm beating it. After losing our business because of the economy and factors related to the re-election of President Obama in 2012 followed by 16-mos of job hunting, my architect-trained husband is working as a trucker and has only been home approximately 5-days a month since I was diagnosed, which has made everything more difficult and often lonely... plus funds are tight. Our family medical deductible is 12K per year for two of us; thank you ObamaCare. But thanks to donations from so many of you, we are making ends meet as I go through treatment while taking care of my father-in-law who is suffering from late stage Alzheimer's and my mother-in-law who suffers from RA and onset dementia as well as hearing loss, for which there are no caretaker funds, as I continue the fight here online to inform and help restore our amazing country. And finally I need to thank a core group of family, friends, and readers... all at a distance, who check in with me regularly. Plus, I must thank my furkids who have not left my side through this fight. You can see them at JustOneMorePet.
View all posts by Ask Marion →
This entry was posted in Alerts, Changing Winds, Elections, Knowledge Is Power, News and politics, Politics and tagged 2014 Elections, DOJ, elections, Elections 2014, Eric Holder, GOP, Legal Rulings, Midterms, North Carolina, Republicans, Thom Tillus, voter fraud, voter ID. Bookmark the permalink.