Goodbye Robin Williams… May you rest in peace!!  Thank you for all the joy and laughter you brought into all our lives!!  For the talent you shared and for all your good works!!  May you find the joy, peace and laughter that you were looking for in the next life!! 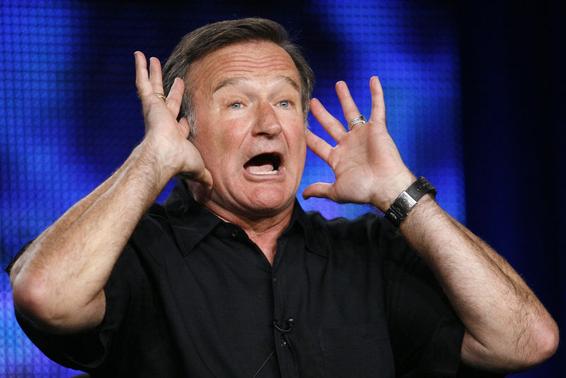 In an apparent suicide, comedian Robin William was found dead today at his home.  He was 63 and had been suffering severe depression.  A press conference will be held on Tuesday morning with more information.

Williams, who was born in Chicago in 1951 and grew up in suburban Detroit.  He originally became known to most as Mork in the TV series Mork and Mindy.  His appeal stretched across generations and genres, from family fare as the voice of Disney’s blue Genie in “Aladdin” to his portrayal of a fatherly therapist in the 1997 drama “Good Will Hunting,” for which he won his only Oscar.  He earned four Academy Award nominations, the first for his portrayal of U.S. Army radio host Adrian Cronauer during the Vietnam War in “Good Morning, Vietnam.”  He also earned nominations for the 1990 coming-of-age prep school drama “Dead Poets Society” and 1991’s “The Fisher King .” Another couple movies of Williams’ fan favorites were Bicentennial Man , Jumanji, and Patch Adams.  One of my personal favorites is “What Dreams May Come“.

“This morning, I lost my husband and my best friend, while the world lost one of its most beloved artists and beautiful human beings. I am utterly heartbroken,” Williams’ wife Susan Schneider said in a statement.

Williams, who was most recently in the CBS television comedy “The Crazy Ones” until it was canceled in May after one season, had entered a rehabilitation center this summer to help him maintain sobriety, but it now appears to have been a lot more serious… or maybe just too late. Perhaps Williams’ death will bring much needed attention to the problems of depression and substance abuse in Hollywood as well as in our society in general?

Sadly, it appears that Robin Williams made everyone happy and feel better… except himself.

Dennis Miller said on the O’Reilly Factor, “If a gentle and cool cat like Robin Williams could be lost to this disease, we all can!”   Who should you be calling today that can use your help??

Robin married three times, most recently in 2011 to Sharon Schneider. He has three children: Zelda (25), Cody (22) and Zak (31).  Williams noted that his children often referenced his own struggles with alcohol when he would confront them about their own misbehavior.

“They went, ‘And you had a three-year drunken relapse.’ Ah, thank you for bringing that back, my little happy creatures,” Williams quipped.

The death of Robin Williams shook Hollywood, and colleagues mourned the loss of what many called a big-hearted man and one of the most inventive comedians of his time.  His death also deeply affected his local artists’ community, far from the hype of Hollywood.

“Robin was a lightning storm of comic genius and our laughter was the thunder that sustained him,” said Steven Spielberg, who directed Williams as Peter Pan in the 1991 film, “Hook.”

“He embodied what it meant to be humble,” said Lucy Mercer, executive artistic director at Throckmorton Theatre, a small venue near Williams’ home, where the actor was known to try out new material.

“He doused us in his love and positive glow and never asked for anything in return.”

Williams had 4-films in the works including “Night at the Museum: Secret of the Tomb,” where in he plays the statue of Teddy Roosevelt who comes to life at night, and holiday comedy “Merry Friggin’ Christmas.” He was also committed to a sequel to his 1993 hit “Mrs. Doubtfire.”

And for those not familiar with his lesser known works, a Robin Williams film festival weekend would be a great staycation!  In addition to the other films and TV shows listed herein some additional suggestions to really see the breadth of Robin Williams’ talent some good additions would be:  Robin Williams: Inside Actors Studio, The World According to Garp, The Birdcage, One Hour Photo , Jakob The Liar and Popeye; not exactly a box office winner but Williams did a great job of bringing the cartoon character to life. Prior to the release of this ill-fated film, many thought Popeye would be for Williams as Superman was for Robin’s dear friend Christopher Reeve.  In reality, no matter which Robin Williams film you choose, you can’t go wrong, because he always gave his best!

“I am completely and totally devastated. What more can be said?!”

Sarah Michelle Gellar, Robin’s final TV costar on CBS’ The Crazy Ones (Pilot ),  had a bit more to say:

“My life is a better place because I knew Robin Williams. To my children he was Uncle Robin, to everyone he worked with, he was the best boss anyone had ever known, and to me he was not just an inspiration but he was the Father I had always dreamed of having. There are not enough adjectives to describe the light he was, to anyone that ever had the pleasure to meet him. I will miss him everyday, but I know the memory of him will live on. And to his family, I thank them for letting us know him and seeing the joy they brought him. Us crazy ones love you. God, grant me the serenity to accept the things I cannot change, the courage to change the things I can, and the wisdom to know the difference.”

Robin Williams gave consistent and enthusiastic support to all in his industry and the comedic world.  He was beloved the world over. He was famous not only for his acting and comedic genius but also his charity work and charitable contributions.

Robin Williams entertained over 90,000 troops for the USO in 13 countries.  They have said he was part of their family.

St. Jude issued a statement upon Williams’ death thanking him for his selfless contributions of time and money.  He began doing commercials and benefits for them in 2004.

The same year, Williams joined the board of the Christopher & Dana Reeve Foundation, which raises money for spinal cord injury research. Williams served on the board for four years and he has continued to be involved since then.  Williams and Christopher Reeve, the actor and director, were roommates when they were students at the Juilliard performing arts school in New York.

“Robin would do two or three dinners or events for the Reeve Foundation each year,” said Peter Wilderotter, CEO of the foundation.

Robin Williams would have been missed under any circumstances, but he left us at a time when laughter and joy are in short supply.

God Bless you and your family, Robin!!  You will be missed!!

*Updated:  The promised press conference was held late Tuesday morning, 12.12.14 at which time Lt. Keith Boyd reminded the press and the public that this was still an on-going open investigation and the final results from the Coroner would not be available for approximately 6-weeks.

It was disclosed that preliminary, Robin McLaurin Williams’ death has been ruled a suicide and that he was found by his personal assistant.  It appears that he had tried to slit his wrists before hanging himself by the neck with a belt.  When Williams was found, rigor mortis had already set in, so his death had taken place hours before; probably in the middle of the night.

Let us hope that there will some positive change or breakthrough that comes from Robin Williams’ all too early and all too tragic demise.  Having lived through the tragedy of depression and suicide by a parent and an even more unfortunate sideline consequence, over 30-years ago, I can attest that all too little has changed.  Changing our view and attitude toward mental illness and substance abuse would perhaps be the greatest gift and thank you we could give Robin Williams.  But in the meantime… let us remember and focus on his talent and philanthropy culminating in a lifetime of joy given freely and in abundance to all of us by this amazingly talented and caring man.

*Updated 08.14.12:  As the world struggles to make sense of Robin Williams’ death, his wife Susan Schneider revealed in a statement that the beloved actor was suffering from early stages of Parkinson’s Disease, certainly a possible trigger.

Every once in awhile, God sends special angels to live on Earth with us.  Robin Williams was one of those.  Perhaps God just needed him back?

“Robin Williams made this Earth a better place because he was here… We should all be so lucky to be able to say that about our lives!!”  Ask Marion

I am a babyboomer and empty nester who savors every moment of my past and believes that it is the responsibility of each of us in my generation and Americans in general to make sure that America is as good or even a better place for future generations as it was for us. So far... we haven't done very well!! Favorite Quotes: "The first 50 years are to build and acquire; the second 50 are to leave your legacy"; "Do something that scares you every day!"; "The journey in between what you once were and who you are becoming is where the dance of life really takes place". At age 62 I find myself fighting inoperable uterine Cancer and thanks to the man upstairs and the prayers from so many people including many of my readers from AskMarion and JustOneMorePet... I'm beating it. After losing our business because of the economy and factors related to the re-election of President Obama in 2012 followed by 16-mos of job hunting, my architect-trained husband is working as a trucker and has only been home approximately 5-days a month since I was diagnosed, which has made everything more difficult and often lonely... plus funds are tight. Our family medical deductible is 12K per year for two of us; thank you ObamaCare. But thanks to donations from so many of you, we are making ends meet as I go through treatment while taking care of my father-in-law who is suffering from late stage Alzheimer's and my mother-in-law who suffers from RA and onset dementia as well as hearing loss, for which there are no caretaker funds, as I continue the fight here online to inform and help restore our amazing country. And finally I need to thank a core group of family, friends, and readers... all at a distance, who check in with me regularly. Plus, I must thank my furkids who have not left my side through this fight. You can see them at JustOneMorePet.
View all posts by Ask Marion →
This entry was posted in Americana, Charity, Entertainment, Fun, Fun and Happiness, Health and wellness, News and politics, Remembering and tagged Christopher and Dana Reeve Foundation, comedy, depression, entertainment, Genius, heroes, Hollywood, joy, Laughter, mental illness, movies, Parkinson's Disease, remembering, Robin Williams, St. Jude, staycation, Stigma, Substance Abuse, Suicide, tragedy, USO. Bookmark the permalink.