Wausau, Wisconsin: Wal-Mart officials were unprepared for an overflow crowd of well over 1,000 that turned out for a Sarah Palin book signing event.  The retailer had only 700 copies of her best-seller on hand and were unable to satisfy the demand for Palin’s third title.  “Good Tidings and Great Joy: Protecting the Heart of Christmas (Kindle)” 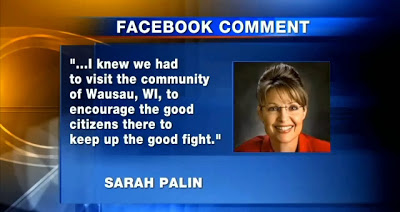 There have been long lines everywhere Palin as appeared on her book tour… Louisiana, Bill Graham’s Library, Iowa, Liberty University… And, Sarah Is not only back… in full swing, but here to stay!

Why Sarah Palin is here to stay

That could have been the slogan at Sarah Palin’s book-signing on Friday at the Billy Graham Library. As she greeted admirers, surrounded by the lights, trees and decorations, her message came across loud and clear.

“She’s gorgeous,” someone said, after she appeared to loud applause from the crowd. And she was, dressed in black pants and a black patterned lace top – glasses on, hair up and pen ready.

Many of those waiting in line wore a pin that read “It’s OK to Wish Me a Merry Christmas,” carrying through the theme of Palin’s book “Good Tidings and Great Joy: Protecting the Heart of Christmas,” which sees the freedom to express the Christian values of the season under siege.

While some, including me, may believe stampede-triggering Thanksgiving Day sales more of a threat to those values than an innocently expressed greeting of “Happy Holidays,” the latter is indeed a problem, according to some in Friday’s enthusiastic crowd. (There were 68 cars in line for Palin’s scheduled 10 a.m. appearance when a library representative arrived at 7 a.m., she said.)

“Absolutely,” said Tammy Vander Zee, 43 and a mother of two. “I work for a large corporation and I’m afraid to say it” — Merry Christmas that is. She said she admired how outspoken Palin is, and how she’s met being pro-life with her advocacy for special needs children, especially after having a son, Trig, who has Down syndrome. “She lives out her beliefs,” Vander Zee said of Palin. “That’s amazing in a political person these days.”

Whether or not you agree with Palin and her uncompromising views on what is wrong and right in America, she speaks for a lot of Americans who feel a little forgotten and a lot disrespected.

“I do not like the way she’s been treated,” said Susan Thomas, 61, of Charlotte, by the media or her opponents.  “The way they spin her comments, like she’s stupid,” added Vander Zee. “She’s not remotely stupid.” Jenner Wall, 50, in sales and marketing in Charlotte, said she likes that a conservative woman can speak out. “She’s intelligent, and she stands behind what she says.” As a tour operator, Wall had visited Wasilla, Palin’s Alaska home town, and couldn’t wait to tell her so.

What is undeniable is that Palin speaks not only for them but to them. At the long table piled high with books, she smiled, reached out, shook hands and conversed with everyone. Despite a sign warning off posed pictures, she took plenty of those, as well.

Palin gave a special greeting to a few, such as 22-year-old Charlie Walling. It was the third time he had met Palin, who sends him a Christmas card and Alaska calendar each year. “She’s awesome and has a great family,” said Walling, a community college student who has Down syndrome. When he asked Palin out for lunch, she told she’d loved to go, but had to travel to Louisiana.

Charlie’s mother, Stephanie Walling, who just moved with her family to Charlotte from Florida, said they first met Palin when Trig was a baby and have tried to stay in contact. “Our connection is through both having children with Down syndrome,” she said. “She’s a real advocate for special needs kids and adults.”

Those who would sit around a television roundtable, poking holes in Palin’s misstatements on what is contained in the Affordable Care Act or her opinions on President Obama’s intentions might miss a larger point. Her opponents will go away before she does. Just ask Martin Bashir, the former MSNBC host who lost his show and left the network after directing crude comments her way. Each attack just makes her supporters love her more.

Franklin Graham, Billy Graham’s son and head of the Billy Graham Evangelistic Association, took Palin on a tour of the library, through its exhibits chronicling the elder Graham’s journey, before the book signing. The two are friends, and last month, she attended and spoke at a 95th birthday celebration for the ailing Billy Graham in Asheville, N.C. Franklin Graham hovered for a while during Palin’s one-on-one chats at the signing, but he wisely left the spotlight to her.

Her next stop with Graham on Friday was the Charlotte processing center for Operation Christmas Child, the charity for Franklin Graham’s Samaritan’s Purse that ships shoe boxes packed with gifts to children around the world.

Though Operation Christmas Child has been criticized for its evangelistic mission, that’s what drew Denise Brown of Hartville, Ohio, to it. Her church joined another in Ohio to collect and fill 1,400 shoe boxes, and she and her husband had traveled to Charlotte to help pack boxes at the processing center. Brown, who said she had worked at a pre-school and had taken in foster children, said the charity “had a double blessing — to provide things for children in need and also to share the Gospel.”

One line on Friday waited for Palin. Brown and her husband, David, stood in another for admission to the Billy Graham Library, which has been drawing evening visitors for its Christmas program, with carriage rides, carols and a live Nativity scene.

While those in both lines freely celebrate Christmas their way, many of them also find familiar solace in the message of Sarah Palin’s book, that this particular holiday – despite the fact it  has survived a lot more than a chorus of “Season’s Greetings” —  needs protecting.

You could say that Palin is preaching to the choir. But it’s one that is raising its voice, especially at this time of year. Frederick Jones was certainly happy to be there. After meeting Palin, the 73-year-old from Belmont, N.C., said, “She was great.” Jones, who said he admired that “she stands for Jesus Christ,” couldn’t stop smiling when he added, “I’d like to take her home in my suitcase if I had a chance.”

Mary C. Curtis is an award-winning multimedia journalist in Charlotte, N.C. She has worked at The New York Times, Charlotte Observer and as national correspondent for Politics Daily. Follow her on Twitter: @mcurtisnc3

America by Heart : Reflections on Family, Faith, and Flag (Kindle)

Our Sarah: Made in Alaska (Kindle)

I am a babyboomer and empty nester who savors every moment of my past and believes that it is the responsibility of each of us in my generation and Americans in general to make sure that America is as good or even a better place for future generations as it was for us. So far... we haven't done very well!! Favorite Quotes: "The first 50 years are to build and acquire; the second 50 are to leave your legacy"; "Do something that scares you every day!"; "The journey in between what you once were and who you are becoming is where the dance of life really takes place". At age 62 I find myself fighting inoperable uterine Cancer and thanks to the man upstairs and the prayers from so many people including many of my readers from AskMarion and JustOneMorePet... I'm beating it. After losing our business because of the economy and factors related to the re-election of President Obama in 2012 followed by 16-mos of job hunting, my architect-trained husband is working as a trucker and has only been home approximately 5-days a month since I was diagnosed, which has made everything more difficult and often lonely... plus funds are tight. Our family medical deductible is 12K per year for two of us; thank you ObamaCare. But thanks to donations from so many of you, we are making ends meet as I go through treatment while taking care of my father-in-law who is suffering from late stage Alzheimer's and my mother-in-law who suffers from RA and onset dementia as well as hearing loss, for which there are no caretaker funds, as I continue the fight here online to inform and help restore our amazing country. And finally I need to thank a core group of family, friends, and readers... all at a distance, who check in with me regularly. Plus, I must thank my furkids who have not left my side through this fight. You can see them at JustOneMorePet.
View all posts by Ask Marion →
This entry was posted in Americana, Books, Constitution, Freedom, History, Holidays, Joy, Leadership, News and politics, Patriotism, Politics, Religion and Faith, Spirituality, Tradition, Wake Up and tagged 2016 Election, Americana, atheists, Billy Graham, Book Signing, Books, Charismatic, Christianity, Christmas, educate yourself, freedom, leadership, Middle-America, Palin, Sarah Palin, secularism, tea party, Wal-Mart, Wisconsin, WoC. Bookmark the permalink.