Christians coming together for an American brother imprisoned in Iran because of his faith: 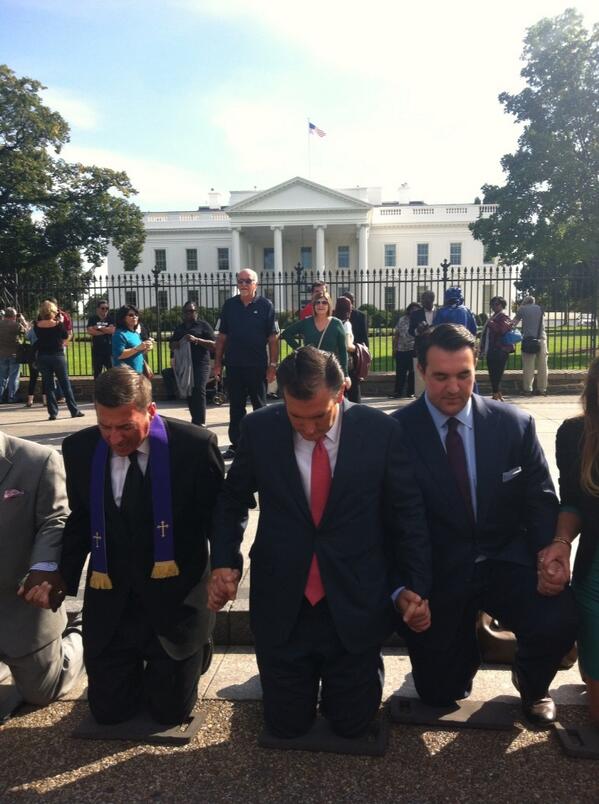 Ted Cruz praying for Pastor Abedini outside the White House 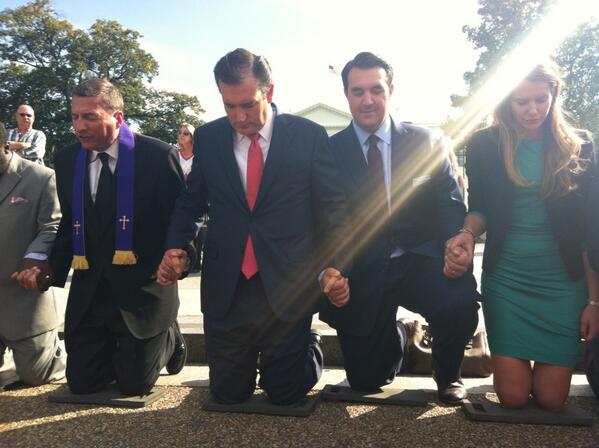 Ok. One last pic of Cruz. My favorite of the bunch

Below are the words of Rev. Rob Schenck, the man who organized the prayer.

“In the image you see me at the center with my prayer stole as we intercede in Jesus’ name for our brother in Christ and imprisoned pastor, Saeed Abedini, who has suffered in an Iranian prison for one year because of his faithful witness to Christ. Kneeling with me on my left (the significance of the placement should be noted) is the U.S. Sen. Ted Cruz, a tea party Republican from Texas. Sen. Cruz just made wall-to-wall headlines for his 20+ hour filibuster opposing Obamacare, the President’s signature legislative achievement.

On my right (again, note the orientation) is Rev. Frazier White, a Democrat community organizer from my neighborhood of Capitol Hill, and a huge supporter of President Obama. At the moment the photo was taken, though, the politically polar opposite positions of the Senator and the Pastor were irrelevant.

We were bowed before the Holy, the Supernal, the highest Lord in the universe, and the One and Only Eternal King. Everything else: party labels, policy positions, job descriptions, accents, zip codes, skin color, filibusters and organizing, were all utterly and completely dwarfed. In that moment of prayer–especially for a fellow Christian, a persecuted believer, whose circumstances are for most us unimaginable–our political and cultural squabbles seemed petty.

Pastor White, Sen. Cruz, Rev. Pat Mahoney, Jordan and Anna Sekulow, myself, and so many others, were there in front of the White House to do the really and truly important business of crying out to God for one of our own that was suffering for his faith.”

CBN News: Ted Cruz alongside Rev. Rob Schenck (from Faith and Action) and Rev. Frazier White (a Democrat and Obama supporter) praying for Saeed Abedini, who has been in an Iranian prison for one year. He is being persecuted for his faith in Jesus Christ.

Bristol Palin posted this on her blog today. It’s a full page ad taken out in the NY Times by Billy Graham for Pastor Saeed:

h/t to The Right Scoop

I am a babyboomer and empty nester who savors every moment of my past and believes that it is the responsibility of each of us in my generation and Americans in general to make sure that America is as good or even a better place for future generations as it was for us. So far... we haven't done very well!! Favorite Quotes: "The first 50 years are to build and acquire; the second 50 are to leave your legacy"; "Do something that scares you every day!"; "The journey in between what you once were and who you are becoming is where the dance of life really takes place". At age 62 I find myself fighting inoperable uterine Cancer and thanks to the man upstairs and the prayers from so many people including many of my readers from AskMarion and JustOneMorePet... I'm beating it. After losing our business because of the economy and factors related to the re-election of President Obama in 2012 followed by 16-mos of job hunting, my architect-trained husband is working as a trucker and has only been home approximately 5-days a month since I was diagnosed, which has made everything more difficult and often lonely... plus funds are tight. Our family medical deductible is 12K per year for two of us; thank you ObamaCare. But thanks to donations from so many of you, we are making ends meet as I go through treatment while taking care of my father-in-law who is suffering from late stage Alzheimer's and my mother-in-law who suffers from RA and onset dementia as well as hearing loss, for which there are no caretaker funds, as I continue the fight here online to inform and help restore our amazing country. And finally I need to thank a core group of family, friends, and readers... all at a distance, who check in with me regularly. Plus, I must thank my furkids who have not left my side through this fight. You can see them at JustOneMorePet.
View all posts by Ask Marion →
This entry was posted in Get Involved, Knowledge Is Power, Politics, Religion and Faith, Spirituality, Strength, We Are All God's Creatures and tagged Billy Graham, Bristol Palin, Christianity, Christians, faith, Iran, NY Times, Pastor Saeed Abedinim, persecution, prayer, religion, Ted Cruz, Tweets, Washington, White House. Bookmark the permalink.