The remaking of Hillary Clinton is in full force!

[…] Hillaryville should be imploding and even though Hillary does ‘not’ deserve our admiration nor another shot at the Presidency, the left is sure that Hillary Clinton will be the 2016 Democrat Presidential candidate.  Regardless of the truth about Hillary’s disgraceful handling of and decisions during the Benghazi crisis and the entire surrounding operation; her involvement in gun-walking; her questionable involvement with the Muslim Brotherhood… hence her relationship with her senior staffer, Huma Abedin Weiner… yes Mrs. Anthony Weiner; and her role in promoting several major anti-Constitution pro-UN treaties and programs including the UN Small Arms Treaty and the Rights of the Child Treaty which essentially aim to transfer rights and powers of the Constitution, Americans and American parents to the United Nations she is at the top of the Democrat Party’s list of 2016 presidential candidates and the media is and will continue to follow their lead.

Remember those who died in the Benghazi attacks in service of the United States… and all the unanswered questions… It does make a difference!! I bet if it were Chelsea left behind in Benghazi it would make a huge difference to Hillary!!

The left is committed to rebuilding Hillary from a sinner to a saint including a campaign of whitewashing the Clinton past (both Bill and Hillary’s) and the mainstream media the left controls will be airing cherry picked specials on both the Clintons beginning with an upcoming NBC miniseries where Hillary will be played by Diane Lane, the daughter-in-law of uber-liberal Barbra Streisand and wife of Josh Brolin who starred in the less than complementary film W./[Blu-ray] about George W. Bush; what could go wrong? The complicit media will spin the Clinton story to Hillary’s benefit, unlike the way they portrayed the Reagans in the recent Lee Daniels’s movie, The Butler, where ‘Hanoi’ Jane  was purposely cast as First Lady Nancy Reagan and unlike the jour’no’lists who purposely colluded  as part of a mission to destroy Sarah Palin with lies and fabrications.

Charles Krauthammer recently appeared on The Factor predicting that a 2016 Hillary Presidential bid will not be easy and that she is not a shoe in. The “only memorable thing about Clinton as Secretary of State was her ‘what difference does it make’ catastrophe” when she testified before Congress on Benghazi, said Krauthammer.

Is Hillary Clinton already campaigning for the Democratic presidential nomination? Charles Krauthammer doesn’t think she’s a shoe-in candidate. He told Bill O’Reilly on The Factor, “First of all, let’s remember she’s not exactly invincible. She was the anointed one before Barack Obama came along.”

He said the Republican Party has a stronger argument because the country hasn’t done well under President Obama. Krauthammer cited Marco Rubio, Rand Paul, Chris Christie and Jeb Bush as some of the possible opponents to take on Clinton.

O’Reilly wasn’t as convinced, saying that Clinton is almost like an incumbent. But Krauthammer said that doesn’t mean a Republican candidate won’t win in the end. He said part of the GOP’s job will be de-mythologizing Clinton.

Krauthammer also took issue with Clinton’s record as Secretary of State. “Name me one thing she accomplished in the four years. […] The only thing that came out of her Secretary of State period was a memorable line, ‘what difference does it make,’ about the Benghazi catastrophe – the first slaying of an American ambassador in three decades.”

Moreover, “people get tired of a party in power,” Krauthammer said. “Obama’s going to have an unsuccessful second term. The economy’s going to be anemic. It’s not going to be that easy for a Democrat to say eight more years.” 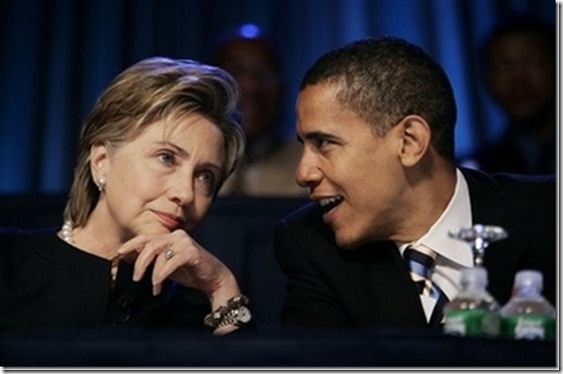 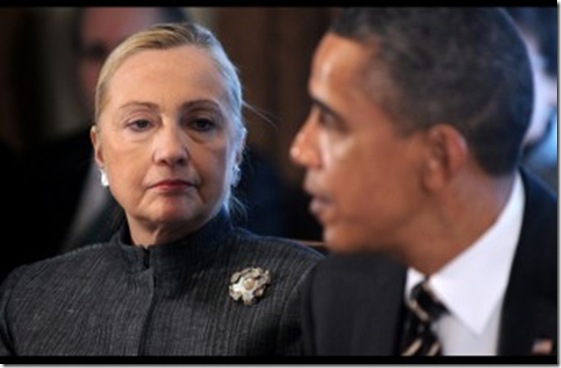 “The left progressive Democrat party is already hot and heavy into trying to rehab the old sow’s ear Hillary, even with all the scandals, into a silk purse they can (and will if America doesn’t wake up) sell to Americans and far too many women who have long been sold a bag of tainted goods about Hillary Clinton and feminism in general.”  —Reformed Woman

Obama in a Dress….

Even the NY Times Took a Hard Look at the Clinton Foundation in a recent piece. And many are questioning the early unofficial start of the Clinton campaign.  It leaves a lot of time for people to dig out the dirt, and there is plenty on the Clintons; plus there is the burnout factor.  Beginning her campaign this early may leave many looking for someone new, even if the truth doesn’t turn them away, by 2016.

You might want to read Books: The Shadow Party: How George Soros, Hillary Clinton, and Sixties Radicals Seized Control of the Democratic Party (Kindle) and Hillary Clinton Nude: Naked Ambition, Hillary Clinton And America’s Demise (Kindle) as a balance to the MSM news, miniseries and Clinton specials that will be thrown your way between now and 2014 and intensified after that. The left is sure America will buy whatever they sell, from harmful drugs, to GMO foods, to cover-ups on an ever-growing list of scandals, to lies about and purposeful negative intervention of anyone who stands up to them… and of course to another 8-years of the Clintons. (Propaganda/Kindle by Edward Bernays is a must read for everyone). […]  The Progressive Democrat Party leadership, actually the  power elite (on both sides), think average Americans are stupid or at least uninformed and disinterested enough for them to steer us in any direction they see fit.

2016 just could turn out to be the year of The Election of the First Female President of the United States and Hillary Clinton will do anything to make sure it is her.  So now is the time for people with options and solutions to step up and for the rest of us to educate ourselves!

Bill, Ted, Antonio, Joe, Debbie and Friends Take Us All to an Alternative Universe….

The Muslim Brotherhood in the Obama Administration  (Kindle)

From Shadow Party to Shadow Government: George Soros and the Effort to Radically Change America (Kindle)

Collusion: How the Media Stole the 2012 Election—and How to Stop Them from Doing It in 2016 (Kindle)

I am a babyboomer and empty nester who savors every moment of my past and believes that it is the responsibility of each of us in my generation and Americans in general to make sure that America is as good or even a better place for future generations as it was for us. So far... we haven't done very well!! Favorite Quotes: "The first 50 years are to build and acquire; the second 50 are to leave your legacy"; "Do something that scares you every day!"; "The journey in between what you once were and who you are becoming is where the dance of life really takes place". At age 62 I find myself fighting inoperable uterine Cancer and thanks to the man upstairs and the prayers from so many people including many of my readers from AskMarion and JustOneMorePet... I'm beating it. After losing our business because of the economy and factors related to the re-election of President Obama in 2012 followed by 16-mos of job hunting, my architect-trained husband is working as a trucker and has only been home approximately 5-days a month since I was diagnosed, which has made everything more difficult and often lonely... plus funds are tight. Our family medical deductible is 12K per year for two of us; thank you ObamaCare. But thanks to donations from so many of you, we are making ends meet as I go through treatment while taking care of my father-in-law who is suffering from late stage Alzheimer's and my mother-in-law who suffers from RA and onset dementia as well as hearing loss, for which there are no caretaker funds, as I continue the fight here online to inform and help restore our amazing country. And finally I need to thank a core group of family, friends, and readers... all at a distance, who check in with me regularly. Plus, I must thank my furkids who have not left my side through this fight. You can see them at JustOneMorePet.
View all posts by Ask Marion →
This entry was posted in Books, Knowledge Is Power, low-informed voters, manipulation of the public, Politics, Stand Up, Wake Up, Watch the Other Hand, You Be the Judge and tagged 2016 Election, eithics, Election 2016, Hillary, Hillary Clinton, Hillayville, Levin, lies, low-informed voters, Mark Levin, optionsm Palin, politics, progressivism, rebranding, rebranding Hillary, rebuilding, remaking, remaking Hillary, repackaging, smoke and mirrors, The Clintons, UN, United Nations disarming America, watch the other hand. Bookmark the permalink.