Before the Electoral College Electors could even cast their votes to certify the presidential election of 2012, which many are trying to stop through recounts, investigations of suspected pre-set electronic voting machines or by the somewhat skewed use of the 12th Amendment if some states’ electors withhold their votes, suspecting a rigged election… progressive newspapers, liberal pundits and the uninformed were already writing and speculating about another Hillary Clinton presidential run in 2016.

The New York Times, in their Sunday, 11.11.12, Review Section ran Hillary’s Next Move and the Daily Kos wrote Why Hillary Clinton Should Run for President.  Really?  Is this the same Hillary… that cannot make it back to testify before Congress on Benghazi because of her previous plans to visit and go wine tasting with friends in Australia?

Every day, people approach Hillary Clinton and tell her she has an obligation to run and give America its first woman president. “Yes, they do!” she laughs, with the trademark H.C. chortle. Being asked to run for president is a kind of side career all by itself.

Clinton gives many variations on the theme of don’t-think-so. (“Oh, I’ve ruled it out, but you know me. Everybody keeps asking me. So I keep ruling it out and being asked.”) Also a thousand different forms of beats-me. (“I have no idea what I’m going to do next.”) What she does not do is offer the kind of Shermanesque if-nominated-I-will-not-run language that would end the conversation.

Instead, she veers off into a discussion of all the things she’ll do when she’s no longer secretary of state, and there’s time. That led to a mention of her favorite television shows, which are all about house buying and home improvement. Read in Full HERE.

On 04.26.12 the Examiner ran Sarah Palin’s next move? and earlier in the year: Why Sarah Palin Should Be President (part 1) and Why Sarah Could Win

Sarah has not become famous by being shy. Throughout the primary race, she has cleverly heaped praise upon whichever candidate needed to surge in order to split-up the vote and keep the contest moving toward a possible brokered convention. She has even admitted that she would entertain the idea of having her own name appear in the running at a brokered convention. Her interviews along the way have shown that she was sticking to that plan.

When it was wise, she heaped praise on Santorum. Other times, Sarah told people to go out and vote for Newt. She has consistently said good things about Ron Paul while maintaining a neutral stance regarding Mitt Romney. Read in Full HERE.

The difference between the two articles and attitude behind them is that when the primarily ‘liberal’ members of the press talk about Sarah, even in  a positive way, it is about what she can do for the tea party, the Republican party or other candidates, not their encouragement or speculation about her running for president in 2016 and what she can do for the country in that position.  When the media talk about Hillary, as they salivate, it is about the county’s need for her to run for president, when in reality if they had reported the news and events of Benghazi impartially and truthfully, instead of being part of the cover-up, Hillary’s aspirations of being President would have been shattered… but there is always Karma.  Many feel that Hillary and Obama should have resigned over Benghazi as their foreign policy unravels. On the flipside, when they talk about Sarah the media keeps the Palin Derangement Syndrome they created going.

These two women could end up facing each other in 2016, whether it is running as the Republican and Democrat candidates for president or the Democrat and a new third party candidate.

These two women, Hillary Clinton and Sarah Palin, without a doubt are two of the most (if not the most) charismatic, influential, powerful, loved and hated women in U.S. politics.  And both are qualified to be president of the United States.  The difference is that the media (and Hollywood) hate one of them and love the other and their politics and belief systems are polar opposites.

Both women have experience.  Palin has been the Mayor of Wasilla, the Governor of Alaska, the GOP Vice Presidential Candidate in 2008 and a major leader in and speaker for the tea party and candidates with tea party, fiscal conservative, Constitutional and family values.  Palin is also widely credited with reviving a long-stalled effort to build a natural-gas pipeline from Alaska’s Prudhoe Bay energy fields to the Lower 48 states and relatedly recently participated in a special: Paying at the Pump, with Eric Bolling. Hillary Clinton has been a First Lady where she promoted her own version of ObamaCare (HillaryCare) and the Progressive Project:  It Takes A Village, the Senator from New York, a Democratic Presidential Primary Candidate in 2008 and Secretary of State.

Other than the contrived scandals and exaggerated slipups created by the media, that have all been proved to be lies and set-ups, Sarah Palin has a flawless record, without scandal, whereas both Hillary Clinton’s personal and  political lives are filled with it!

The Hate for Sarah Palin

Sarah Palin can mesmerize a crowd; Hillary not so much.  Tens of thousands regularly turned out for Palin’s 2008 appearances. It was at her first rally in Cali in October 2008 that this writer first saw Sarah Palin speak to a crowd of 23,000 in Carson, CA. I have been a supporter ever since and so are most who hear her speak, especially live, and actually listen!

Oh, just in case anyone’s memory needs refreshing on the magnificence of her 2008 RNC speech…

And for those who forgot the reaction to her speech, check out:  Flashback: Media Reviews of Governor Palin’s 2008 RNC Speech.  Greta Van Susteren just recently pulled out the old 2008 polls. And Sarah showed she had what it took and did what she needed to do in the VP debate as well!

And being between their ages, myself, I feel I can say that Sarah Palin is younger, prettier and more energetic; all positive assets when

you are running for office or holding office as a women.  But the liberal biased media loves and will promote Hillary to all our detriment and have already begun their campaign. And they collectively hate and fear Sarah with the same vengeance that they love Hillary.  Even many in her own party fear Sarah’s popularity with the people. They fear if they give her a fair shot and more people get to hear her and see her political instincts in action that they will like her and she will upset the establishment apple cart, enough so not to include her or let her speak, like at the 2012 RNC Convention.

In the end the question will be whether ‘we the people’ do our homework, go with our gut and share with the oblivious around us or whether we will allow the powers that be (the Progressives and globalists) and the liberal lamestream media (MSM) and their Hollywood buds to decide another election for us using lies, slight of hand, diversions, omissions and down right cheating like in 2008 and in 2012.

America is ready for a female president and these two women, Sarah Palin and Hillary Clinton are ready to be president. The only obstacle in their way could be a Marco Rubio and a dumbed down populace led by a bias media.. 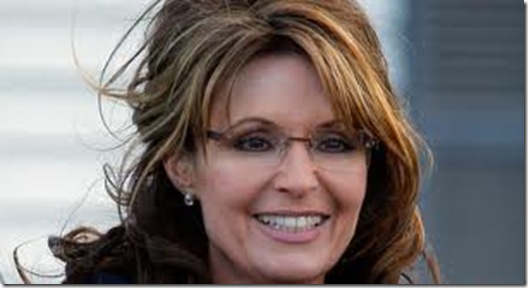 It may seem too early for most people to think about the presidential election of 2016, but as we all know, the Clintons have been thinking about it since 2008 and Bubba worked relentlessly for political foe Obama in 2012 to keep them in the limelight… and Team Obama never left some of the battle ground states like Ohio between 2008 and 2012.  As for Sarah, one never knows what is next except that you can expect her to do it her way…

I am a babyboomer and empty nester who savors every moment of my past and believes that it is the responsibility of each of us in my generation and Americans in general to make sure that America is as good or even a better place for future generations as it was for us. So far... we haven't done very well!! Favorite Quotes: "The first 50 years are to build and acquire; the second 50 are to leave your legacy"; "Do something that scares you every day!"; "The journey in between what you once were and who you are becoming is where the dance of life really takes place". At age 62 I find myself fighting inoperable uterine Cancer and thanks to the man upstairs and the prayers from so many people including many of my readers from AskMarion and JustOneMorePet... I'm beating it. After losing our business because of the economy and factors related to the re-election of President Obama in 2012 followed by 16-mos of job hunting, my architect-trained husband is working as a trucker and has only been home approximately 5-days a month since I was diagnosed, which has made everything more difficult and often lonely... plus funds are tight. Our family medical deductible is 12K per year for two of us; thank you ObamaCare. But thanks to donations from so many of you, we are making ends meet as I go through treatment while taking care of my father-in-law who is suffering from late stage Alzheimer's and my mother-in-law who suffers from RA and onset dementia as well as hearing loss, for which there are no caretaker funds, as I continue the fight here online to inform and help restore our amazing country. And finally I need to thank a core group of family, friends, and readers... all at a distance, who check in with me regularly. Plus, I must thank my furkids who have not left my side through this fight. You can see them at JustOneMorePet.
View all posts by Ask Marion →
This entry was posted in Common Sense, Knowledge Is Power, Politics, Thoughts ..., Wake Up, Watch the Other Hand, Wisdom, You Be the Judge and tagged 2016, 2016 Election, Election 2012, Election 2016, elections, Electoral College, first female president of the United States, Hillary, Hillary Clinton, Hillary vs. Sarah, liberal bia media, MSM, Palin, Palin Derangement Syndrome, Palin vs. Clinton, Sarah, Sarah Palin, Sarah vs. Hillary. Bookmark the permalink.

87 Responses to 2016 – The Election of the First Female President of the United States?