Wow… they really are banking on the fact that most Americans are uninformed, disinterested or brainwashed!  Or As Herman Cain puts it: They Think You’re Stupid

The September 11, 2012 terrorist attack at the U.S. Consulate in Benghazi, Libya, revealed a serious failure in the Obama Administration foreign policy. They could not figure out what or who initiated this attack and completely denied any real responsibility.

Truth Revolt: But no matter… at least says Media Matters. They have published an eBook entitled, “The Benghazi Hoax.” Written by David Brock and Ari Rabin-Havt, the eBook allegedly “details the right-wing media’s attempt to turn a tragic attack into a political scandal.” Furthering this lopsided take on the event is the book review magazine Kirkus Reviews. They hail this work as a “strong defense of the Democratic response” to what Media Matters insists are “right-wing myths about the attack on the diplomatic compound.”

Talking points for liberals to refute talking points by conservatives over a controversy that just won’t quit. (Right out of their Alinsky handbook)

On Sept. 11, 2012, the U.S. embassy compound in Benghazi, Libya, suffered a terrorist attack that left four Americans dead, including U.S. Ambassador J. Christopher Stevens, and 10 injured. Initial speculation that this was a protest against an anti-Muslim YouTube video was soon corrected to confirm that it was a well-plotted action by terrorists who have yet to be caught. Beyond these facts, so much remains up for grabs, with conservatives claiming that the compound should have been better protected and should have received reinforcements, that President Barack Obama is soft on terrorism and tried to shift blame, and that Secretary of State Hillary Clinton has lied about her role and responsibility in the tragedy. To the contrary, asserts Media Matters for America founder Brock (The Republican Noise Machine: Right-Wing Media and How It Corrupts Democracy, 2004, etc.) in this strong defense of the Democratic response, a conspiracy of conservative lies has kept this controversy alive, primarily through the Fox News talking heads and other “hoaxsters,” including Mitt Romney and senators John McCain, Lindsay Graham and Kelly Ayotte. They have progressed from the scapegoating of Obama to an attempt to derail Clinton’s campaign as the front-runner to be nominated as his successor.

“The reality is that there are two Benghazis,” writes the author, one in which “the most basic facts would get twisted, contorted, even invented out of thin air to create bogus narratives” by “a Republican noise machine.”

“The most basic facts would get twisted, contorted, even invented out of thin air to create bogus narratives by a Republican noise machine”, is another canned talking point…

If Hillary Clinton does indeed run for president, questions concerning Benghazi will continue to be raised, and this book attempts to answer every one of them in her defense.

Looks like Media Matters is getting their campaign ready for their beloved would-be presidential contender for 2016! With this, they are proclaiming the left’s new mantra: “Which lies can you live with?” 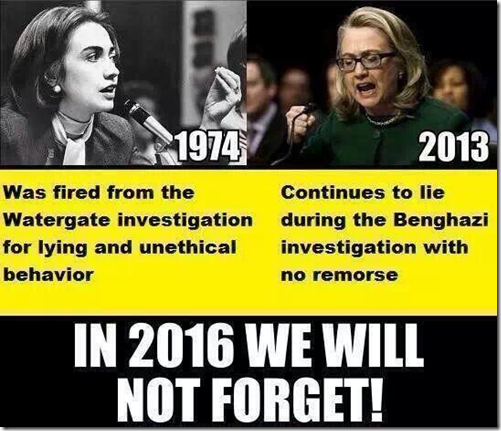 Please America… do your homework.  We cannot survive a Hillary Clinton presidency after an Obama presidency!!

Why is Hillary Clinton mending fences with bankers?

Hillary’s Ultimatum to Huma: Your Marriage or Your Job… As Flowers Speaks Out

Hillary Lets the Jihadist Cat Out of Bag

Bill Whittle – What Difference Does It Make? (Video)

NY Times Takes a Hard Look at the Clinton Foundation

The Secret Life of Bill Clinton: The Unreported Stories

I am a babyboomer and empty nester who savors every moment of my past and believes that it is the responsibility of each of us in my generation and Americans in general to make sure that America is as good or even a better place for future generations as it was for us. So far... we haven't done very well!! Favorite Quotes: "The first 50 years are to build and acquire; the second 50 are to leave your legacy"; "Do something that scares you every day!"; "The journey in between what you once were and who you are becoming is where the dance of life really takes place". At age 62 I find myself fighting inoperable uterine Cancer and thanks to the man upstairs and the prayers from so many people including many of my readers from AskMarion and JustOneMorePet... I'm beating it. After losing our business because of the economy and factors related to the re-election of President Obama in 2012 followed by 16-mos of job hunting, my architect-trained husband is working as a trucker and has only been home approximately 5-days a month since I was diagnosed, which has made everything more difficult and often lonely... plus funds are tight. Our family medical deductible is 12K per year for two of us; thank you ObamaCare. But thanks to donations from so many of you, we are making ends meet as I go through treatment while taking care of my father-in-law who is suffering from late stage Alzheimer's and my mother-in-law who suffers from RA and onset dementia as well as hearing loss, for which there are no caretaker funds, as I continue the fight here online to inform and help restore our amazing country. And finally I need to thank a core group of family, friends, and readers... all at a distance, who check in with me regularly. Plus, I must thank my furkids who have not left my side through this fight. You can see them at JustOneMorePet.
View all posts by Ask Marion →
This entry was posted in Books, Get Involved, Knowledge Is Power, Lies, low-informed voters, manipulation of the public, Politics, Stand Up, Wake Up, Watch the Other Hand and tagged alerts, Alinskyites, Benghazi, Benghazigate, e-Book, Herman Cain, Hillary, Hillary Clinton, liars, liberals, lies, Media Matters, More Lies, Progressives, rebranding Hillary, Saving Hillary, Soros, warning. Bookmark the permalink.

7 Responses to Media Hoax on Benghazi to Save Hillary