Obama’s trade agenda now hangs in the balance.  Why?  A day for miracles that perhaps helps explain Paul Ryan’s gaffe and his attack on Drudge and Breitbart News for exposing ObamaTrade (TPA).  Seems Ryan and Pelosi have gone through some type of shift changing?!?  Who knew that Paul Ryan was really Paul Pelosi? Yep, Paul Ryan pulled a Pelosi by saying we peasants can read the ObamaTrade TPA bill once the imperial congress rams it down our throats. Must be something in the cheese up in Wisconsin?!? Perhaps its time for RINO Paul Ryan to officially join the Democrats. He’s now shown all his cards, but then the miracle… Nancy Ryan is standing against this bill… meaning against global governance and for once against Obama? 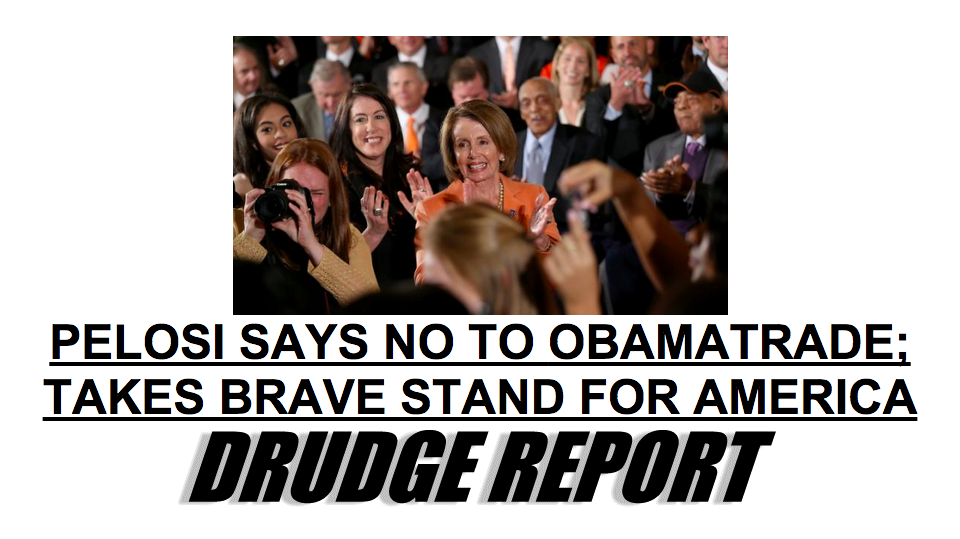 Ryan on Fox and Friends:

“Let’s talk about trade. Very odd situation – the president is fighting without Rep. Nancy Pelosi (D-CA), without Rep. Steny Hoyer (D-MD), with republicans to get his trade authority passed through. You’ve already discovered through Breitbart and others that there were some provisions in there for climate change, provisions in there for immigration,” Brian Kilmeade asked. “You’ve looked to knock that out and push this forward. Where are you at with trade authority? And are you questioning your own support of it?”

Ryan responded by attacking Breitbart News and others on the internet, like the Drudge Report, which has been hammered his support of Obamatrade as well.

We need to see the documents, the country needs to see these trade agreements—60 days. Oh, and you cannot put any immigration in here and you can’t put any climate change in a trade agreement. So, this is why we want to pass Trade Promotion Authority, so we can determine the outcome of these trade agreements not what’s happening out there right now. That’s why we’re asserting power and control here. Look a broken clock is right twice a day. The president is actually supporting trade, which is what Republicans are in favor of and that’s why we are where we are.

The hosts weren’t convinced. “One of the things on the internet – so you can tell us whether or not it’s true. So, for the most part everybody on Capitol Hill is in the dark … you don’t really know what’s in it yet, because you haven’t seen it, so it’s hard to support it one way or another?” Ryan was asked.

There’s a lot of confusion. Trade Promotion Authority—what we’re voting on this week—is a process. It’s not a trade agreement. It’s a procedure for how you consider trade agreement. The Transpacific Partnership – it doesn’t exist yet. The reason we can’t see it yet is because it hasn’t been negotiated yet – it doesn’t exist yet. It’s been negotiated for years. Bush started these negotiations.

“So you’re voting on an idea tomorrow?” Doocy asked him.

The Trans-Pacific Partnership and the March Toward ‘Global Governance’ — #StopFastTrack

Obamatrade: Why the Secrecy Behind this New Global Governance “Treaty?”

DEVIL’S PACT: Treasonous ObamaTrade Bill Sets Stage for Global Governance, Which is Why You Can’t Read I

Bilderberg World Elite Meet to Plan and Plot the Future

I am a babyboomer and empty nester who savors every moment of my past and believes that it is the responsibility of each of us in my generation and Americans in general to make sure that America is as good or even a better place for future generations as it was for us. So far... we haven't done very well!! Favorite Quotes: "The first 50 years are to build and acquire; the second 50 are to leave your legacy"; "Do something that scares you every day!"; "The journey in between what you once were and who you are becoming is where the dance of life really takes place". At age 62 I find myself fighting inoperable uterine Cancer and thanks to the man upstairs and the prayers from so many people including many of my readers from AskMarion and JustOneMorePet... I'm beating it. After losing our business because of the economy and factors related to the re-election of President Obama in 2012 followed by 16-mos of job hunting, my architect-trained husband is working as a trucker and has only been home approximately 5-days a month since I was diagnosed, which has made everything more difficult and often lonely... plus funds are tight. Our family medical deductible is 12K per year for two of us; thank you ObamaCare. But thanks to donations from so many of you, we are making ends meet as I go through treatment while taking care of my father-in-law who is suffering from late stage Alzheimer's and my mother-in-law who suffers from RA and onset dementia as well as hearing loss, for which there are no caretaker funds, as I continue the fight here online to inform and help restore our amazing country. And finally I need to thank a core group of family, friends, and readers... all at a distance, who check in with me regularly. Plus, I must thank my furkids who have not left my side through this fight. You can see them at JustOneMorePet.
View all posts by Ask Marion →
This entry was posted in Alerts, Big Brother, Choices, Economy and Money, Knowledge Is Power, News and politics, Wake Up, Watch the Other Hand and tagged #StopFastTrack, Drudge, Fox and Friends, global agenda, global governance, globalism, Locusts, Miracles, NAFTA, Nancy Pelosi, Obamatrade, Paul Ryan, Pelosi, trade, TTP, Twilight Zone. Bookmark the permalink.

8 Responses to Obama Trade Agenda Now Hangs in the Balance…