Ryan Gaffe… As the RINO Turns

Rep. Paul Ryan (R-WI) a chief proponent of Obamatrade, finally admitted on Wednesday that the process is highly secretive 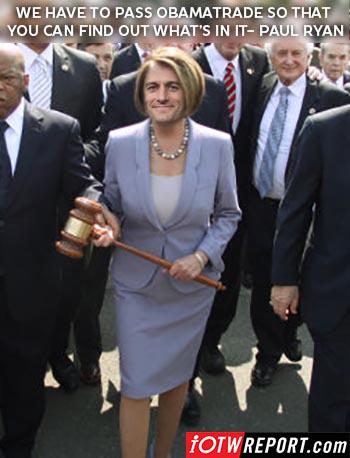 TPNN: former Vice-Presidential candidate also made a mind-blowing gaffe in his House Rules Committee testimony akin to former Speaker Nancy Pelosi’s infamous statement about Obamacare, “We have to pass the bill so that you can find out what is in it.”

“It’s declassified and made public once it’s agreed to,” Ryan said of Obamatrade during questioning from Republican opponents.

The discussion during which Ryan made this gaffe came as Rep. Michael Burgess, who opposes Obamatrade, and Rules Committee chairman Rep. Pete Sessions, a supporter, were discussing the secrecy of the deal with him.

It came right after an incredible exchange where Ryan attempted a ploy to try to save immigration provisions contained within the Obamatrade package as a whole—specifically TiSA—that were exposed by Breitbart News earlier on Wednesday.  Instead of addressing the problem, Ryan advanced a ruse designed to get more votes for his Obamatrade agenda but not stop the immigration provisions.

TPP will become public if TPA is agreed to, which is what Ryan was attempting to state when he made the big Pelosi-esque gaffe.  But at that point, Congress will lose much of its ability to have oversight over and influence on the process, since TPP is, in many respects, already negotiated. It’s 800 pages long, and on fast-track, Congress will only get an up-or-down vote and won’t be able to offer amendments. The Senate vote threshold also drops down to a simple majority rather than normally having a 60-vote threshold, or in the case of treaties, a 67-vote threshold.

Does this feel vaguely like reliving the nightmare of the passing of Obamacare in 2010 – except this time the Republicans are in charge of Congress and are in cahoots with Obama?

Ryan insists that he is near to getting the votes to pass the bill (apparently to find out what’s in it), but House Democrats are balking. How is it possible that the Republicans are willing to put their faith in a President who has circumvented their every move, lied, usurped power and is the very reason many of them were elected in the first place?  To STOP him.

Obamatrade: Why the Secrecy Behind this New Global Governance “Treaty?”

The Trans-Pacific Partnership and the March Toward ‘Global Governance’ — #StopFastTrack

DEVIL’S PACT: Treasonous ObamaTrade Bill Sets Stage for Global Governance, Which is Why You Can’t Read I

Bilderberg World Elite Meet to Plan and Plot the Future

I am a babyboomer and empty nester who savors every moment of my past and believes that it is the responsibility of each of us in my generation and Americans in general to make sure that America is as good or even a better place for future generations as it was for us. So far... we haven't done very well!! Favorite Quotes: "The first 50 years are to build and acquire; the second 50 are to leave your legacy"; "Do something that scares you every day!"; "The journey in between what you once were and who you are becoming is where the dance of life really takes place". At age 62 I find myself fighting inoperable uterine Cancer and thanks to the man upstairs and the prayers from so many people including many of my readers from AskMarion and JustOneMorePet... I'm beating it. After losing our business because of the economy and factors related to the re-election of President Obama in 2012 followed by 16-mos of job hunting, my architect-trained husband is working as a trucker and has only been home approximately 5-days a month since I was diagnosed, which has made everything more difficult and often lonely... plus funds are tight. Our family medical deductible is 12K per year for two of us; thank you ObamaCare. But thanks to donations from so many of you, we are making ends meet as I go through treatment while taking care of my father-in-law who is suffering from late stage Alzheimer's and my mother-in-law who suffers from RA and onset dementia as well as hearing loss, for which there are no caretaker funds, as I continue the fight here online to inform and help restore our amazing country. And finally I need to thank a core group of family, friends, and readers... all at a distance, who check in with me regularly. Plus, I must thank my furkids who have not left my side through this fight. You can see them at JustOneMorePet.
View all posts by Ask Marion →
This entry was posted in Alerts, Big Brother, Economy and Money, Elections, Get Involved, Knowledge Is Power, Leadership, Lies, News and politics, Politics, Wake Up, Watch the Other Hand, You Be the Judge and tagged Breitbart, Congress, corruption, follow the money, global governance, money, Nancy Pelosi, Obamatrade, Paul Ryan, RINO, Rules Committee, Secrecy, Sessions, T-TIP, TiSA, TPA, TPP, wake-up America, watch the other hand. Bookmark the permalink.

4 Responses to Ryan Gaffe… As the RINO Turns