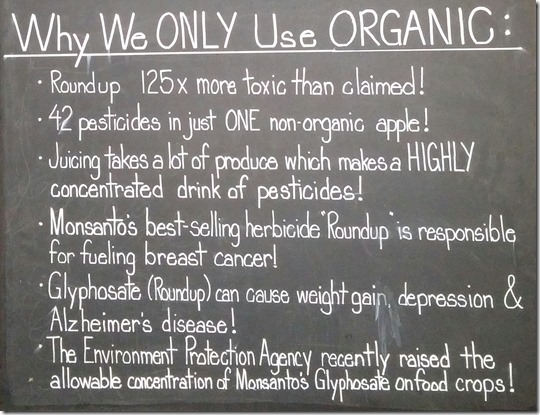 Yes, the same EPA who is watching out for so-called Global Warming has once again raised the allowable concentration of Monsanto’s Glyphosate, Roundup, on food crops. Monsanto who little by little has for years fought to control and own all seed.

Their best selling herbicide, Roundup, is now linked to breast Cancer, depression, the destruction of our gut flora, obesity and Alzheimer’s Disease.  Testing reveals that Roundup is 125 times more toxic than Monsanto claimed.

The 2013 regulation, which can be viewed HERE, sets the following regulations regarding glyphosate residues on crops:

Natural News:  The EPA declares glyphosate to be perfectly safe

The EPA even offers this utterly absurd, false statement as justification for its allowable contamination levels of glyphosate: “EPA has concluded that glyphosate does not pose a cancer risk to humans. Therefore, a dietary exposure assessment for the purpose of assessing cancer risk is unnecessary.” (SOURCE)

Huh? Do you understand this? The EPA is saying glyphosate is so incredibly safe that it is not even necessary to study its possible carcinogenic effects in humans. No science needed! The EPA simply waves a magic (Monsanto) wand and says, “Shazam! Glyphosate is safe enough to EAT!”

The EPA, of course, is sadly mistaken. It is apparently not aware of two crucial facts to consider in all this:

1) The Seralini study showed an alarming increase in cancer tumors in rats that were fed glyphosate in their drinking water.

2) Monsanto has already been found guilty of committing scientific fraud by altering the results of “scientific” studies in order to trick regulators.

The “scientific” data proving glyphosate to be “safe” has been fabricated! And the EPA is basing its conclusions on fabricated, corporate-quackified junk science that has one purpose: trick regulators into thinking the deadly poison is safe, thereby vastly increasing the usage of the chemical by farmers.

Video: The World According to Monsanto – Full Length Film

Hillary Rodham Clinton, answering questions as if a presidential contender, speaks to thousands at the BIO International Convention on June 25, 2014, at the San Diego Convention Center. She was interviewed by Jim Greenwood, president and CEO of the Biotechnology Industry Organization, a trade group based in Washington. For more on her appearances in San Diego, see Times of San Diego at http://timesofsandiego.com/politics/2…

Conservative, liberal or independent – it makes no difference – when one of the nationally recognized presidential candidates for 2016 supports Monsanto, you know that democracy has failed in the United States. Read More HERE

*Under pressure, Similac just announced that they will no longer GMO products in their line

Why would we knowingly feed our children GMOs before it has really been proven to be ‘safe’ as Monsanto, BASF, and other companies like Abbott Laboratories, Mead Johnson Nutrition, and Nestlé USA, the company who wants to own water rights, tout?

If you feed your baby one of the following three infant formulas, you are perhaps, unknowingly, feeding them GMO corn, sugar beets, and soy, since they are often used these companies’ products:

One of the widest used brands and often given out for ‘free’ at hospitals, this baby formula is made by Abbott Laboratories. The company is selling you a can of baby formula for over $100 that is full of GMO poisons. You could contact the company to ask why it would include GMOs, or, you can just boycott it altogether. Shareholders are supposed to vote on whether the company is able to continue to use GMO in baby formulas. Abott Laboratories is one of the top 10 pharmaceutical companies – go figure.

Another baby formula often given out as ‘free’ samples to new mothers is made by Mead Johnson Nutrition. Their website boasts, ‘Enfamil, scientifically designed to meet the nutritional needs of newborns and infants.’ The following Mead Johnson formulas are known to have GMO toxins:

The GMO-riddled formula made by Nestlé USA is perhaps the most questionable since the company has knowingly tried to ‘patent’ water and make it a commodity though it is all part of life itself on this planet. Do we really want to trust a company who wants privatize water with feeding our children health foods? The company went GMO free in South Africa, according to Corporate Action Network, but continues to sell American families the contaminated GMO formula we feed our babies every day.

Nestlé USA and Mead Johnson Nutrition have dismissed calls to remove genetically-modified organisms (GMO) from their infant formula products in the US – citing the approved use of GMOs by several national and global regulatory bodies.

You can boycott all these companies and start making your own home-made, natural baby formula without toxic chemicals and pesticides and nasty GMOs. The assistant director of the FDA, Nick Duy, says we shouldn’t make our own baby formula, but why isn’t he ousting these companies for using questionable (at best) and health-damaging GMOs?

The increase in cases of Cancer of all kinds, Alzheimer’s, Autism, ADHD, Obesity, Depression and many other diseases is rampant.  And the evidence that it is linked to our food supply, vaccines and toxins in our daily environments is also increasing.  Things must change, but positive change is not going to come from the top or from Big Business because for them it is all about the money and control!  Things will only change if and when Americans stand up… through a grassroots ground swell.  One of the greatest tools we have is sharing information and the power of the purse.  So, what is stopping us?

The World According to Monsanto

Monsanto vs. the World: The Monsanto Protection Act, GMOs and Our Genetically Modified Future

Seeds of Deception: Exposing Industry and Government Lies About the Safety of the Genetically Engineered Foods You’re Eating

The Unhealthy Truth: One Mother’s Shocking Investigation into the Dangers of America’s Food Supply– and What Every Family Can Do to Protect Itself

Altered Genes, Twisted Truth: How the Venture to Genetically Engineer Our Food Has Subverted Science, Corrupted Government, and Systematically Deceived the Public

I am a babyboomer and empty nester who savors every moment of my past and believes that it is the responsibility of each of us in my generation and Americans in general to make sure that America is as good or even a better place for future generations as it was for us. So far... we haven't done very well!! Favorite Quotes: "The first 50 years are to build and acquire; the second 50 are to leave your legacy"; "Do something that scares you every day!"; "The journey in between what you once were and who you are becoming is where the dance of life really takes place". At age 62 I find myself fighting inoperable uterine Cancer and thanks to the man upstairs and the prayers from so many people including many of my readers from AskMarion and JustOneMorePet... I'm beating it. After losing our business because of the economy and factors related to the re-election of President Obama in 2012 followed by 16-mos of job hunting, my architect-trained husband is working as a trucker and has only been home approximately 5-days a month since I was diagnosed, which has made everything more difficult and often lonely... plus funds are tight. Our family medical deductible is 12K per year for two of us; thank you ObamaCare. But thanks to donations from so many of you, we are making ends meet as I go through treatment while taking care of my father-in-law who is suffering from late stage Alzheimer's and my mother-in-law who suffers from RA and onset dementia as well as hearing loss, for which there are no caretaker funds, as I continue the fight here online to inform and help restore our amazing country. And finally I need to thank a core group of family, friends, and readers... all at a distance, who check in with me regularly. Plus, I must thank my furkids who have not left my side through this fight. You can see them at JustOneMorePet.
View all posts by Ask Marion →
This entry was posted in Alerts, Asshats, Big Brother, Books, Choices, Dumbing Down of America, Elections, Food and drink, Get Involved, Health and wellness, Knowledge Is Power, News and politics, Wake Up, Watch the Other Hand, You Be the Judge and tagged Alzheimer’s, Big Agra, Big Brother, Big Government, Breast Cancer, Cancer, crops, depression, Election 2016, Environmental Protection Agency, EPA, farming, food, GMO, grassroots, Gyphosate, health, herbicides, Hillary, Hillary Clinton, Monsanto, Nutritions, obesity, Organic, Pesticides, Roots, Roundup, Similac, THITW, Weight Gain. Bookmark the permalink.