Every American should see ‘American Sniper’ and it appears that they are!!  The film has broken the all box office records for films released in January; the biggest January release in history. For an rated R film, the movie was the biggest release ever. In just three days, the movie raked in nearly $100 million dollars and Clint Eastwood doubled his personal release record by double.

But the leftist liberal loons just can’t stop themselves from attacking the film and even the character of hero Chris Kyle.  Bowling for Columbine filmmaker Michael Moore tweeted,

“My uncle killed by sniper in WW2. We were taught snipers were cowards. Will shoot u in the back. Snipers aren’t heroes. And invaders r worse.  But if you’re on the roof of your home defending it from invaders who’ve come 7K miles, you are not a sniper, u are brave, u are a neighbor.”

It sparked a backlash on Sunday, January 18th that caused Moore to back peddle tweeting,

“Hmm. I never tweeted 1word bout AmericanSniper/ChrisKyle. I said my uncle killed by sniper in WWII; only cowards would do that 2 him, others,” he tweeted on Monday morning following a backlash from fans who took issue with his words.

“So ppl want me 2tweet something bout American Sniper? Great acting! Powerful message. Sad ending. There… Oh, and Iraqis are called ‘savages’ throughout the film… Sorry to have to state the obvious again: Invading a country that hasn’t attacked you is illegal & immoral. History will judge us harshly.”

Really Michael??  At least have the guts to stand by your comments… a misguided as they are!

And the week was capped off when ‘B’ actor Seth Rogan implied that Chris Kyle was a Nazi and that American Sniper is no better than Nazi propaganda. 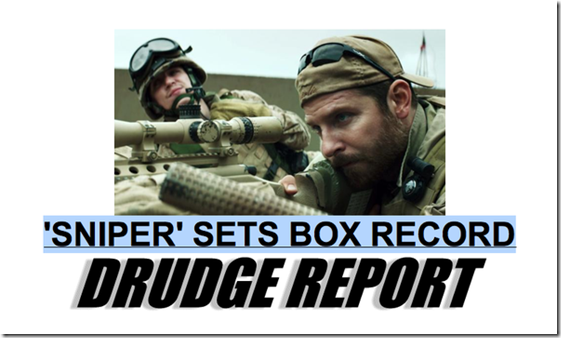 And… this film should win Best Picture at the Oscars!!

In a liberal town that often gets it wrong the amazing film ‘American Sniper’ got the Oscar nod for Best Picture, Best Actor and 4 others. Hollywood does have a history of liking a good war movie, at times, and in recent times this is the 3rd war movie (Flags of Our Fathers / Letters From Iwo Jima) directed by Clint Eastwood that has gotten the nod.  Eastwood is one of the few in the Hollywood crowd that is forgiven for being a conservative. But then again there was no nomination for Best Director for Clint this time around.  Could it have something to do with the ‘empty chair’? Perhaps he should call a special meeting and complain that there are too many liberals in the Academy and no conservatives were nominated this year?!?

Actor Bradley Cooper just received two of the most important reviews for his portrayal of Navy SEAL Chris Kyle in ‘American Sniper’ — the ones from Kyle’s parents and widow.

Wayne Kyle told Sean Hannity on Friday that Cooper did an “outstanding job” portraying his late son in the film and it was clear he “put his heart and soul” into the role. Kyle also said Cooper spent about four months studying the legendary Navy SEAL sniper.

“I called [Cooper] right after we saw the movie and told him how we felt about it and thanked him for what he had done,” Kyle added. “We feel like Bradley did an outstanding job.”

He added, “It’s bittersweet because we are happy and glad that people still are aware of Chris and see the man that he was and still is to us, but yet it hurts that, you know, there’s always that constant reminder. … That pain will probably never go away.”

Kyle’s father previously met with both Eastwood and Cooper and warned them he would “unleash hell” if they did anything to dishonor his son.

The movie has opened to rave reviews and Chris Cooper has said that he hopes this movie and his portrayal of Chris Kyle will open Americans’ eyes to make them realize that we have to take care of our vets.  Both Kyle’s parents and widow Teya, whose opinions matter most, gave the film a thumbs up.

In an industry that slants left and often omits films made by or that are about so-called right leaning subjects involving Christians,  Jews, religion or patriotism… like Unbroken or Lone Survivor, the insanity of the week was when White House supported race baiter Al Sharpton called a special diversity meeting to complain that the movie Selma didn’t get enough nods (Selma received two nominations including Best Picture) and that no African Americans were nominated this year, implying that the academy was too white, too male and too old.  Hello?  Silly me, I thought that the Oscars and the arts were about best performances not quotas and I guess a Best Picture nomination was insulting? And what about recent nominations for movies like and actors in 12 Years a Slave, Django UnChained and The Help? Sharpton should get the Oscar for being the greatest opportunist.  His move and approach this week would be exactly opposite of what MLK would have wanted or done! 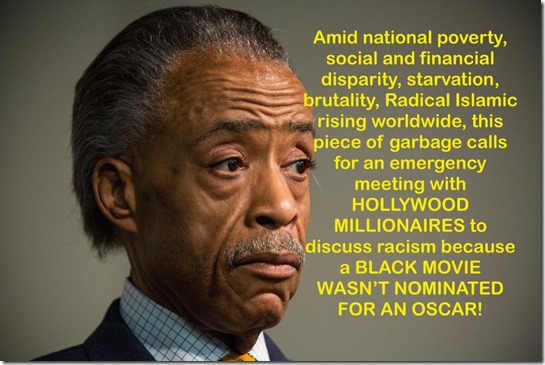 Liberals want everything else redistributed, so why not this?

Major, major controversy in Hollywood. No black nominees. Al Sharpton on the protest prowl. I have a solution. Meryl Streep has a bunch of ‘em, probably some she doesn’t even deserve to have won. Maybe she could give some of hers away to some black actresses.

Al Sharpton, an emergency meeting to discuss the appalling all white Oscar nominees. And the media is all behind this. What has happened to us? Here we have a literal buffoon of a human being, Al Sharpton, a hoaxer, a fraud, a tax cheat, a tax evader, a man who has inspired riots in Harlem. And this man holds positions of prominence in our culture today.

What’s wrong with this picture? Al Sharpton? Talk about a nation of wusses and cowards. I mean, the Sony hack happens and the first thing they do is bend over, grab the ankles, call Al Sharpton. And now Sharpton is raising holy hell about Academy Awards nominees, and they’re listening?

Al Sharpton? I mean, despicable human — forget, you know, making jokes and stuff of usual political commentary, just Al Sharpton, Tawana Brawley hoax, the Freddie’s Fashion Mart deaths and riots, the tax cheats stuff, this buffoonery, and yet he has a position of prominence because he sits at the right hand of Barack Hussein O. He sits at the right hand of Obama, not an accident there, either… Read more HERE

And the Oscar for biggest hypocrite goes to Liam Neeson who complained of there being too many guns In America while starring in a film with guns and having made millions in his career in films with guns.  The Irish born actor might also want to listen to what others in the Commonwealth are saying about allowing themselves to be disarmed.  The fact that hypocrites and fools like the liberals in Hollywood and Washington think they are smarter than our Founding Fathers who lived under oppression in Britain and paid for our freedoms and liberties with their freedom, their lives and their fortunes should make us dig in and defend our Constitution, especially our second amendment, with our freedom, lives and fortunes.  I bet you Marcus Luttrell and Chris Kyle are (were) guns owners and I’m glad!!

Actor Liam Neeson, who stars in the new flick Taken 3, is facing sharp criticism – including from the firearms supplier of the film – for comments he made about firearms in the United State

Mama Grizzlies, pray that your babies grow up to be people of character like Chris Kyle or Marcus Luttrell instead of spineless misguided politicians and actors like Al Sharpton, Michael Moore, Liam Neesan and Seth Rogan.

I am a babyboomer and empty nester who savors every moment of my past and believes that it is the responsibility of each of us in my generation and Americans in general to make sure that America is as good or even a better place for future generations as it was for us. So far... we haven't done very well!! Favorite Quotes: "The first 50 years are to build and acquire; the second 50 are to leave your legacy"; "Do something that scares you every day!"; "The journey in between what you once were and who you are becoming is where the dance of life really takes place". At age 62 I find myself fighting inoperable uterine Cancer and thanks to the man upstairs and the prayers from so many people including many of my readers from AskMarion and JustOneMorePet... I'm beating it. After losing our business because of the economy and factors related to the re-election of President Obama in 2012 followed by 16-mos of job hunting, my architect-trained husband is working as a trucker and has only been home approximately 5-days a month since I was diagnosed, which has made everything more difficult and often lonely... plus funds are tight. Our family medical deductible is 12K per year for two of us; thank you ObamaCare. But thanks to donations from so many of you, we are making ends meet as I go through treatment while taking care of my father-in-law who is suffering from late stage Alzheimer's and my mother-in-law who suffers from RA and onset dementia as well as hearing loss, for which there are no caretaker funds, as I continue the fight here online to inform and help restore our amazing country. And finally I need to thank a core group of family, friends, and readers... all at a distance, who check in with me regularly. Plus, I must thank my furkids who have not left my side through this fight. You can see them at JustOneMorePet.
View all posts by Ask Marion →
This entry was posted in Conservatives, Constitution, Entertainment, Military, News and politics, Patriotism, Progressivism, Thoughts ... and tagged Chris Kyle, Drudge Report, guns, Hannity, Hypocrites, liberals, Marcus Luttrell, Meryl Streep, military, movies, Oscars, Progressives, redistribution, War. Bookmark the permalink.