It has sounded and looked rather like Hillary was running, but perhaps we are looking at 2008 all over again… when the ruling elite decided on a Barack Obama candidacy? Promoting the carrot of the election first black president, instead of the first female president… or was just s decision to go with someone other than Hillary?

TownHall: Hillary Clinton’s book tour has opened with a thud, amid terrible reviews for the 650-page behemoth, as well as a strikingly mistake-packed interview with Dianne Sawyer. WaPo’s Jennifer Rubin wonders if Hillary is “out of practice.” It isn’t hard to see why.  Perhaps Dianne Sawyer should have coordinated with Brent Bozell on how to interview Hillary before air time?

There are two ways to interview potential presidents. You can pepper them with tough questions, and why not? They’re going to apply for the job of Leader of the Free World. Hillary Clinton is used to the other way: Shameless pap. Softballs to be knocked out of the park, write Brent Bozell.

But Hillary in many ways is her own worst enemy! For If you have a reputation for being aloof and inaccessible, putting out a  ‘Mandatory Spontaneous Magical Personal Connection Orderly Queue’ like the one below is probably not the best way to counter that: 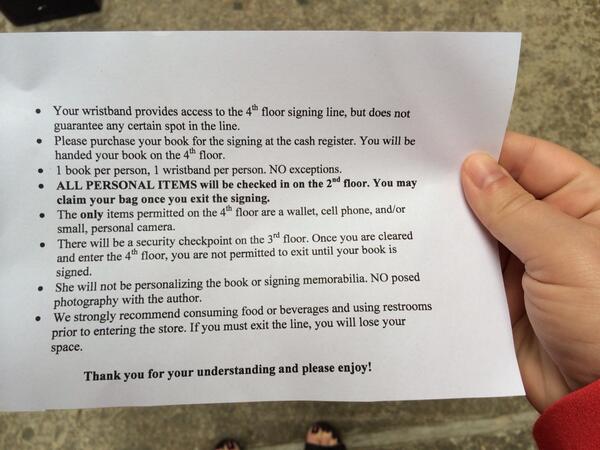 This is perhaps one of best visual differences between attending a Hillary Clinton book signing verses a Sarah Palin book signing, where people feel touched, and sometimes actually are, by the author who cares about them, relates to them and is one of them!

Guidelines being handed out to people waiting at @HillaryClinton book signing

Hillary Clinton rather infamously has a ‘likable enough’ problem. The woman should be figuring out how to minimize it at every turn.  Assuming that she’s running.

But back to the book:

(1) Media critics are panning the book: “A newsless snore,” gripes Politico’s Mike Allen. “She goes on at great length, but not great depth,” says CBS News’ John Dickerson, who accuses Clinton of “playing it safe.” David Ignatius rips the book as a “tedious” series of attempts to “spin” the reader. His headline is perfect: “In ‘Hard Choices,’ Hillary Clinton Is Seen As Hesitant To Take Big Risks.” All of which strongly suggests that Mrs. Clinton wasn’t interested in writing a compelling, provocative, insightful book. She was interested in writing a antiseptic tome that might get dinged for insipidness, but would do virtually nothing that could damage her 2016 presidential run.

(2) Mrs. Clinton made a factual error related to the Benghazi scandal in ‘Hard Choices,’ as exposed by CNN’s Jake Tapper:

Clinton notes that Marines are assigned to only slightly more than 50% of the diplomatic posts throughout the globe, focused primarily on protecting, and if need be destroying classified items. “So while there were Marines stationed at our embassy in Tripoli, where nearly all of our diplomats worked and which had the capability to process classified material, because there was no classified processing at the diplomatic compound in Benghazi, there were no Marines posted there,” Clinton writes. It’s accurate that there were no Marines at the U.S. compounds in Benghazi – Clinton doesn’t go into it, but one of those compounds was a CIA compound with its own force protection. But, as Gen. Carter Ham, the former commander of Africa Command, testified before Congress on June 26, 2013, “there was no Marine security detachment in Tripoli.” It wasn’t until after the attack that Marines were sent to the U.S. Embassy in Tripoli, a contentious issue before and after the attacks, since so many diplomatic officials and security forces before the attack had been pleading to the State Department for greater military protection in Libya…Aides to Clinton argue that the secretary is not getting any facts wrong in this passage. The point she was try to make is that even members of Congress were surprised that only 50% of U.S. diplomatic facilities had a Marine detachment, said one aide, and that the temporary facility in Benghazi was not among them, that the Embassy in Tripoli only had a Marine guard unit after the attacks. They agree that the passage could have been written more clearly.

Not a mistake, just bad writing in need of “clarification” — a word with which Hillary Clinton is becoming rapidly re-acquainted. In her ABC News interview, the former Secretary of State asserted that among the US diplomatic missions facing security threats, Benghazi was merely in the top 25 back in 2012. Which seems…problematic, in light of the advanced warning signs, attempted attacks, and the grisly outcome.

(3) Asked about her lack of signature achievements at State (the challenge could equally apply to her Senate and FLOTUS tenures), Hillary basically took a pass. In fairness, this clip did seem a bit chopped up through editing, although you’d imagine ABC would have included any real answer if she’s offered one. But it seems that nobody on her side can seem to come up with even a single accomplishment.

Given the number of surrogates who’ve been embarrassingly stumped by this sort of question, one would think Hillary herself would be loaded for bear with a focus-grouped, meticulously-prepared answer. That she seemed to just glide past it is a bit startling. On the other hand, I’m beginning to think we’ve entered a post-achievement era in presidential politics, so she might be just fine never satisfactorily addressing the issue. Earlier in the spring, Hillary compared her leadership style to running a “relay race.” Mary Katharine Ham quipped that, fittingly, relay races entail literally handing off the baton to someone else, which is precisely what Mrs. Clinton did on Benghazi security questions:

On ABC, a Hillary classic on Benghazi: ‘I’m taking responsibility, but I was not making security decisions.’

(4) Dan wrote up Hillary’s attempt to cast her “dead broke” family as struggling to make ends meet upon leaving the White House, despite her husband drawing a taxpayer-funded six-figure salary with virtually no living expenses for years — which is not to say they didn’t have, um, other expenses. Lost in translation was the controversial seven-figure home loan they received from Democratic fundraiser (and current Virginia governor) Terry McAuliffe upon leaving office, as well as Hillary’s $8 million book deal, inked in 2000. This Washington Post piece exposes just how ludicrously out-of-touch Hillary’s re-imagination of her financial struggles really is, underscoring Mrs. Clinton’s well-established exaggeration problem. I was also struck by her reply when pressed to justify the gigantic gobs of cash she and her husband have raked in (to the tune of nine-figures) over the years. She defended Bill by praising his hard work and reminded Sawyer that they had to earn twice as much because of all of the taxes. Conservatives should applaud both elements of that answer, though they’ll make it harder for Hillary to run a populist (the new liberal replacement for the moniker progressive that has become a negative term), class warfare campaign. I’ll leave you with the Morning Joe crew pummeling Hillary’s rocky performance thus far, followed by ‘take two’ on her we were basically destitute answer from this morning:

I am a babyboomer and empty nester who savors every moment of my past and believes that it is the responsibility of each of us in my generation and Americans in general to make sure that America is as good or even a better place for future generations as it was for us. So far... we haven't done very well!! Favorite Quotes: "The first 50 years are to build and acquire; the second 50 are to leave your legacy"; "Do something that scares you every day!"; "The journey in between what you once were and who you are becoming is where the dance of life really takes place". At age 62 I find myself fighting inoperable uterine Cancer and thanks to the man upstairs and the prayers from so many people including many of my readers from AskMarion and JustOneMorePet... I'm beating it. After losing our business because of the economy and factors related to the re-election of President Obama in 2012 followed by 16-mos of job hunting, my architect-trained husband is working as a trucker and has only been home approximately 5-days a month since I was diagnosed, which has made everything more difficult and often lonely... plus funds are tight. Our family medical deductible is 12K per year for two of us; thank you ObamaCare. But thanks to donations from so many of you, we are making ends meet as I go through treatment while taking care of my father-in-law who is suffering from late stage Alzheimer's and my mother-in-law who suffers from RA and onset dementia as well as hearing loss, for which there are no caretaker funds, as I continue the fight here online to inform and help restore our amazing country. And finally I need to thank a core group of family, friends, and readers... all at a distance, who check in with me regularly. Plus, I must thank my furkids who have not left my side through this fight. You can see them at JustOneMorePet.
View all posts by Ask Marion →
This entry was posted in Knowledge Is Power, News and politics, Politics and tagged 2016 Elections, Accomplishments, book, Book Tours, Election 2016, elections, Hard Choices, Hillary, Hillary Clinton, Interviews, politics, Stop Hillary. Bookmark the permalink.