Palin to Obama… You Blew it Again, Barack Obama

The Obama administration tells America this soldier served “with honor and distinction.” (http://www.weeklystandard.com/blogs/susan-rice-bergdahl-served-honor-and-distinction_794066.html)

No, Mr. President, a soldier expressing horrid anti-American beliefs – even boldly putting them in writing and unabashedly firing off his messages (http://nypost.com/2014/05/31/the-bizarre-tale-of-americas-last-known-pow/) while in uniform, just three days before he left his unit on foot – is not “honorable service.” Unless that is your standard.

Please use your White House Rose Garden to praise the truly honorable service of our good U.S. troops who were killed in their search for Sgt. Bergdahl (http://www.thedailybeast.com/articles/2014/06/02/we-lost-soldiers-in-the-hunt-for-bergdahl-a-guy-who-walked-off-in-the-dead-of-night.html). Praise the soldiers who fought with everything they had to defeat Islamic terrorists, those whom you just freed from prison. Our men gave all. Our surviving combat vets will forever live with the effects of the missions they willingly engaged in to protect you, our country, and certainly their brothers and sisters who are proud to wear the uniform.

We Lost Soldiers in the Hunt for Bergdahl, a Guy Who Walked Off in the Dead of Night 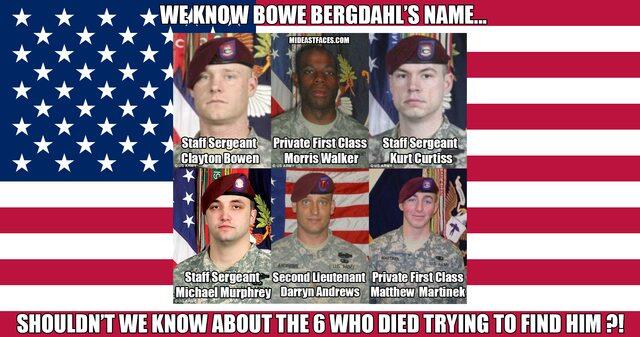 The 6 U.S. Soldiers Who Died Searching For Bowe Bergdahl

You blew it again, Barack Obama, by negotiating away any leverage against the bad guys as these bad guys – Osama Bin Laden’s partners in evil crime – joyfully celebrate their “win” in the deal you sealed.

Video: Fmr Soldier Who Served With Bergdahl: ‘He’s At Best a Deserter, At Worst a Traitor’

Update: And it has now come to light that Bergdahl left behind a note:

WASHINGTON — Sometime after midnight on June 30, 2009, Pfc. Bowe Bergdahl left behind a note in his tent saying he had become disillusioned with the Army, did not support the American mission in Afghanistan and was leaving to start a new life. He slipped off the remote military outpost in Paktika Province on the border with Pakistan and took with him a soft backpack, water, knives, a notebook and writing materials, but left behind his body armor and weapons — startling, given the hostile environment around his outpost.

That account, provided by a former senior military officer briefed on the investigation into the private’s disappearance, is part of a more complicated picture emerging of the capture of a soldier whose five years as a Taliban prisoner influenced high-level diplomatic negotiations, brought in foreign governments, and ended with him whisked away on a helicopter by American commandos.

Judge Jeanine: Obama violated the law by not notifying Congress about the release of the Gitmo 5

War Is Peace, Citizens Are The Enemy

AWOL Traitor Traded for Taliban Terrorists: “In the name of Allah, the most gracious, the most merciful,’’ AWOL soldier’s dad said in Arabic

TEN Terrorists for One Traitor: The Prisoner Release You Didn’t Hear About

I am a babyboomer and empty nester who savors every moment of my past and believes that it is the responsibility of each of us in my generation and Americans in general to make sure that America is as good or even a better place for future generations as it was for us. So far... we haven't done very well!! Favorite Quotes: "The first 50 years are to build and acquire; the second 50 are to leave your legacy"; "Do something that scares you every day!"; "The journey in between what you once were and who you are becoming is where the dance of life really takes place". At age 62 I find myself fighting inoperable uterine Cancer and thanks to the man upstairs and the prayers from so many people including many of my readers from AskMarion and JustOneMorePet... I'm beating it. After losing our business because of the economy and factors related to the re-election of President Obama in 2012 followed by 16-mos of job hunting, my architect-trained husband is working as a trucker and has only been home approximately 5-days a month since I was diagnosed, which has made everything more difficult and often lonely... plus funds are tight. Our family medical deductible is 12K per year for two of us; thank you ObamaCare. But thanks to donations from so many of you, we are making ends meet as I go through treatment while taking care of my father-in-law who is suffering from late stage Alzheimer's and my mother-in-law who suffers from RA and onset dementia as well as hearing loss, for which there are no caretaker funds, as I continue the fight here online to inform and help restore our amazing country. And finally I need to thank a core group of family, friends, and readers... all at a distance, who check in with me regularly. Plus, I must thank my furkids who have not left my side through this fight. You can see them at JustOneMorePet.
View all posts by Ask Marion →
This entry was posted in Knowledge Is Power, manipulation of the public, Military, Politics, Wake Up, Watch the Other Hand and tagged Bergdahl, heroes, knowledge, Lies. War, manipulation, military, Obama, Obamaland, Palin, Sarah Palin, Taliban, terrorism, terrorists, traitor, troops. Bookmark the permalink.

3 Responses to Palin to Obama… You Blew it Again, Barack Obama