Roger Williams, the world renowned virtuoso pianist who topped the Billboard pop chart in the 1950s and played for nine U.S. presidents during a long career, died Saturday October 8, 2011 at age 87 at his home in Encino, CA (a suburb of Los Angeles) of complications from pancreatic cancer, according to his former publicist, Rob Wilcox.

Williams was known as an electrifying stage performer and an adept improviser, who effortlessly switched between musical styles, who touched people through his music.

Williams’ 1955 hit “Autumn Leaves” was the only piano instrumental to reach number one on the Billboard pop charts. It remains the best-selling piano record of all time, with more than 2 million sold. 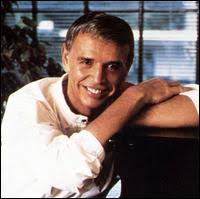 Nicknamed the “pianist to the presidents,” Williams played for every Commander in Chief from Harry Truman to George H.W. Bush. His last trip to the White House was in 2008, when he performed at a luncheon for then-first lady Laura Bush.

Jimmy Carter and Roger Williams, who shared a birthday, were good friends despite their political differences. When the two men turned 80, Williams played a 12-hour marathon at the Jimmy Carter Library and Museum in Atlanta, with the former president in attendance.

Born Louis Wertz in Omaha Nebraska, Williams started playing piano at age 3. His father was a Lutheran minister in Iowa and Williams grew up to the sound of the church organ. By age 9 he was prolific with several instruments and could play anything by ear.

As a teenager, KRNT-AM gave young Williams his own 15-minute radio show, which was broadcast live from a Des Moines, Iowa, department store. Later he hosted a program on WHO-AM, where he first met the station’s young sports announcer, Ronald “Dutch” Reagan. The two men started a friendship which was closer than brothers, lasting 64 years until Reagan’s death.

Roger Williams actively supported Ronald Reagan’s political campaigns for California governor and U.S. president. “He was the most optimistic man I’ve ever met in my life,” said Williams of Reagan, who enjoyed his friend’s piano playing on more than 1,000 occasions.  Today, he just might be performing a long-awaited piano concerto in Heaven for his closest pal, Ronald Reagan.

For Roger’s 83rd Birthday The Ronald Reagan Presidential Library and Museum threw him a bash. The catch was, Williams had to provide the entertainment for his own party, for 14 ½ hours.

Williams had set the marathon record at the Jimmy Carter Library and Museum in Atlanta, Georgia on his 80th birthday by playing for 14 hours and broke it on his 83rd.

Williams moved to New York to study jazz at the Juilliard School of Music. He won performing contests on the popular radio shows “Arthur Godfrey’s Talent Scouts” and Dennis James’ “Chance of a Lifetime.”

Soon after, Williams was signed to Kapp Records. Founder Dave Kapp was determined to find a hit for the young prodigy. Producers decided on a shortened arrangement of “Autumn Leaves,” which Williams recalled first clocked in at three minutes and three seconds.  “In those days the disc jockeys would not play a record over three minutes long. So Kapp asked if I could play the thirds a little faster. I did and it came in at two minutes and 59 seconds,” Williams said, according to Wilcox.

“Autumn Leaves” was an instant hit and catapulted Williams to the national stage. He followed it up with a string of hits including “Born Free,” “The Impossible Dream,” “Theme From Somewhere In Time,” and “Lara’s Theme from Dr. Zhivago.”

Williams became a popular guest on the top television shows of the time including “The Ed Sullivan Show,” “The Perry Como Show,” and “The Steve Allen Show.”

In a 1995 interview with The Associated Press, Williams said he liked playing — and listening to — all types of music. “The only thing I have against rock ‘n roll is the volume,” he said.  Roger Williams – Greatest Hits and much of his other work including his Christmas album Golden Christmas have been a steady sellers even in a era where his type of music is not in vogue.

Roger Williams was a fixture at the Crystal Cathedral in Garden Grove, CA for 35 years

but he left over a disagreement with one of Schuller daughters after the Schuller kids took the reins from their parents, Roger’s good friends Pastor Robert H. and Arvella Schuller.  He performed at every Christmas Eve Service, which usually meant between 5 and 7 shows in one day, until the falling out.  Having been a member of the Crystal Cathedral for years, I was blessed to see many of those performances live.

My mother-in-law went back to college after her kids were grown and got her degree in Music, specializing in Piano in the same program with Roger Williams. That connection plus having been a member of Crystal Cathedral, a cast member of their Glory of Christmas and Glory of Easter passion plays, as well as hearing him play live so many times makes it feel like we have lost a member of the family.

Roger Williams, who has released an astounding 116 albums, was the first pianist ever to receive a star on the Hollywood Walk of Fame.  He was later also inducted into the Hit Parade Hall of Fame.

In March, Williams announced on his Web site that he had been diagnosed with pancreatic cancer. A few days later he played his last concert, in Palm Desert, Calif.  I remember when he was once asked at an interview how he knew that he was meant to play. Williams responded: “As I remember it,”I just walked up to the piano, sat down and started playing melodies.”

Below are some videos of Roger Williams playing at the Ronald Reagan Centennial for America:

Williams is survived by his daughters, Laura Fisher and Alice Jung, and five grandchildren.

Funeral services are pending. An unusual tomb awaits pianist Roger Williams.  His spacious marble customized crypt at the Crystal Cathedral Memorial Gardens has a skylight, a lit stained-glass portrait and jumbo black piano-style keys that run along the side.  Roger will be buried with his wife who is already interned there.

I am a babyboomer and empty nester who savors every moment of my past and believes that it is the responsibility of each of us in my generation and Americans in general to make sure that America is as good or even a better place for future generations as it was for us. So far... we haven't done very well!! Favorite Quotes: "The first 50 years are to build and acquire; the second 50 are to leave your legacy"; "Do something that scares you every day!"; "The journey in between what you once were and who you are becoming is where the dance of life really takes place". At age 62 I find myself fighting inoperable uterine Cancer and thanks to the man upstairs and the prayers from so many people including many of my readers from AskMarion and JustOneMorePet... I'm beating it. After losing our business because of the economy and factors related to the re-election of President Obama in 2012 followed by 16-mos of job hunting, my architect-trained husband is working as a trucker and has only been home approximately 5-days a month since I was diagnosed, which has made everything more difficult and often lonely... plus funds are tight. Our family medical deductible is 12K per year for two of us; thank you ObamaCare. But thanks to donations from so many of you, we are making ends meet as I go through treatment while taking care of my father-in-law who is suffering from late stage Alzheimer's and my mother-in-law who suffers from RA and onset dementia as well as hearing loss, for which there are no caretaker funds, as I continue the fight here online to inform and help restore our amazing country. And finally I need to thank a core group of family, friends, and readers... all at a distance, who check in with me regularly. Plus, I must thank my furkids who have not left my side through this fight. You can see them at JustOneMorePet.
View all posts by Ask Marion →
This entry was posted in Entertainment, Music and tagged Autumn Leaves, Cancer, Crystal Cathedral, Hollywood Walk of Fame, legends, musician, obituaries, pancreatic cancer, pianist Roger Williams, piantist, Roger Williams. Bookmark the permalink.