12 companies that let you bring your dog to work

Allowing dogs at the office can be beneficial to a company’s bottom line. Benefits of dogs in the workplace include increased morale and productivity, happier employees, lower absenteeism rates and even improved relationships among co-workers. A recent study out of Central Michigan University reveals that dogs in the workplace can lead to more trust between co-workers and that leads to more collaboration among team members.

A 2006 survey from The American Pet Product Manufacturers Association (APPMA) reports that nearly one in five American companies allows pets in the workplace. The following 12 companies are just a few of the thousands of dog-friendly workplaces across the U.S. (Text: Melissa Hincha-Ownby)

Did you just break a plate from Grandma’s beloved antique china set? If so, Replacements, Ltd. may be able to save the day. The company is the go-to place to find a missing piece of fine china, crystal or silver. One would think that china and dogs wouldn’t be a good mix, but Replacements, Ltd. has been a dog-friendly workplace for years. A news release from 2003 touts the relaxed, blue-jeans atmosphere where more than 30 employees have brought their furry friends to work. The company has also been featured in articles about dogs in the workplace by both USA Today and CBS News.

Google is home to one of the most employee-friendly workplaces in the world. Employees can eat lunch at one of the company’s free gourmet cafes, visit the onsite hair salon or laundry center, get a massage — and bring their dog to work. Google’s dog policy provides employees with a basic set of guidelines including cleaning up after the dog makes and being mindful of allergic co-workers. The Google Code of Conduct specifically addresses cats at work, and the news is not good for feline fans: “Google’s affection for our canine friends is an integral facet of our corporate culture. We like cats, but we’re a dog company, so as a general rule we feel cats visiting our offices would be fairly stressed out.”

Iams and Eukanuba are just two of the many brands under the Procter & Gamble label. Employees of P&G’s Pet Care division in the Cincinnati area are welcome to bring their dogs to work every day, not just on Take Your Dog To Work Day. The company even has a V.P. of Canine Communications, Euka (pictured right). Euka, a cross between a Labrador retriever and a Bernese mountain dog, will be retiring next year after eight years of service. P&G Pet Care recently announced that Pawl Griffin (left), a Petit Basset Griffon Vendeen, is already in training to jump into the V.P. role.

If you’re an ice cream lover, Ben & Jerry’s offer to employees of three free pints of ice cream, frozen yogurt or sorbet every day is a big perk. If you’re also a dog lover, Ben & Jerry’s could be the ideal place to work because you can bring your pooch to the office. Sean Greenwood, public relations spokesperson for the company, describes what interviewees may see when they visit the company, “If they sit in the lobby for a few minutes, they’re more than likely to see a dog going outside. I’ll say, ‘Oh yeah, we’re a dog-friendly place. It’s part of the tour. This is the design department — Momo is there; Jack is in R&D, Allison’s in retail, Scout is brand new … ‘ They’re just like your co-workers.”

Autodesk employees are offered a generous benefits package including a six-week paid sabbatical every four years, paid time off between Christmas Eve and New Year’s Day, discounts on a variety of group insurance options and, of course, the option of bringing their dogs to work. About 5 percent of the company’s nearly 7,000 employees take advantage of this benefit. According to Michael Oldenburg, Autodesk spokesman, “Having a pet also encourages employees to take breaks during the day that they may not take if they didn’t have a pet.”

Build-A-Bear Workshop has taken a love for stuffed animals to a new level — children of all ages can visit a Build-A-Bear Workshop and create a custom stuffed animal to cherish forever. The company’s love of animals goes beyond the stuffed kind, however. Employees at the World Bearquarters (a.k.a. the world headquarters) can bring their dogs to work. The company even has a chief executive dog, Milford, who celebrates his birthday every year by throwing a grand party for the other company dogs. Build-A-Bear Workshop’s dog-friendly workplace policy is just one reason the company has been named one of Fortune’s 100 Best Companies to Work For three years in a row.

Klutz’s product line includes fun crafts, drawing books, games, puzzles, chicken socks and more. The company, which was founded in 1977 in Palo Alto, Calif., had a rather casual approach to allowing dogs in the workplace. Klutz co-founder John Cassidy shared his story with Carrie Boyko of the All Things Dog Blog, who wrote: “When an employee with a well-behaved dog expressed interest in having his furry friend tag along to work, John felt there was no particular reason not to okay it.” And with that, Klutz joined the growing list of dog-friendly employers.

Believe it or not, the Humane Society headquarters facility in Gaithersburg, Md., didn’t become a dog-friendly workplace until 2007. While one would have expected the Humane Society to be a leader in the dogs-at-work movement, the organization took its time to ensure that everything was done right. To bring their dog to work, employees must submit an application. Once the application is approved, vaccinated dogs are placed on a six-week probation. If everything goes well, the dog can become a permanent member of the workplace. The organization’s careful planning has paid off; since its inception four years ago, no dogs have been removed from the program.

Internet retail giant Amazon is also a dog-friendly workplace. Visitors to the company’s corporate headquarters in Seattle can expect to find between two and three dozen dogs on any given day. Any employee interested in bringing a pet to work must first register the animal as a workplace dog, ensure that the dog is up-to-date on vaccinations and once in the workplace, the dog must remain on a leash unless it is behind a baby gate or in an office with a closed door.

Four Dog Enterprises provides PR and ‘Girl Friday’ services and the owner is also a blogger (including Just One More Pet), freelancer, ghost writer and author who named her company for her four pups.  Much of the employees’ work can be and is done from home, but they are in the office about 50% of the time and bringing their dogs into the office helps the creative juices flow for many of them.  For major meetings and project days the pups are often entertained by a doggie daycare pal who comes to the office to spend the day with them. The only real requirement is that the dogs have their basic shots and get along. One of the pups’ favorite activities is greeting the mailman. 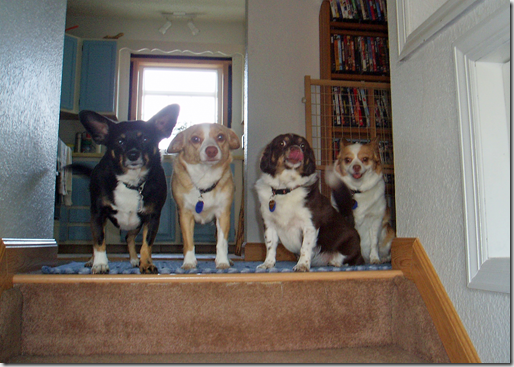 I am a babyboomer and empty nester who savors every moment of my past and believes that it is the responsibility of each of us in my generation and Americans in general to make sure that America is as good or even a better place for future generations as it was for us. So far... we haven't done very well!! Favorite Quotes: "The first 50 years are to build and acquire; the second 50 are to leave your legacy"; "Do something that scares you every day!"; "The journey in between what you once were and who you are becoming is where the dance of life really takes place". At age 62 I find myself fighting inoperable uterine Cancer and thanks to the man upstairs and the prayers from so many people including many of my readers from AskMarion and JustOneMorePet... I'm beating it. After losing our business because of the economy and factors related to the re-election of President Obama in 2012 followed by 16-mos of job hunting, my architect-trained husband is working as a trucker and has only been home approximately 5-days a month since I was diagnosed, which has made everything more difficult and often lonely... plus funds are tight. Our family medical deductible is 12K per year for two of us; thank you ObamaCare. But thanks to donations from so many of you, we are making ends meet as I go through treatment while taking care of my father-in-law who is suffering from late stage Alzheimer's and my mother-in-law who suffers from RA and onset dementia as well as hearing loss, for which there are no caretaker funds, as I continue the fight here online to inform and help restore our amazing country. And finally I need to thank a core group of family, friends, and readers... all at a distance, who check in with me regularly. Plus, I must thank my furkids who have not left my side through this fight. You can see them at JustOneMorePet.
View all posts by Ask Marion →
This entry was posted in Fun, Pets, Unusual, We Are All God's Creatures and tagged animals, APPMA, creativity, dog friendly companies, dog-friendly workplaces, dogs, dogs at work, dogs in the workplace, jobs, The American Pet Product Manufacturers Association. Bookmark the permalink.