The first image is the infamous photo of Clinton wearing shades indoors and using her one Blackberry cellphone captioned,

“I opted for convenience… because I thought it would be easier to carry one device.”

The second image shows Palin with a personal phone in one hand, a baby in the other, and a work cellphone clearly labeled “State of Alaska” resting on the table in front of her, juggling the responsibilities of mother and career. 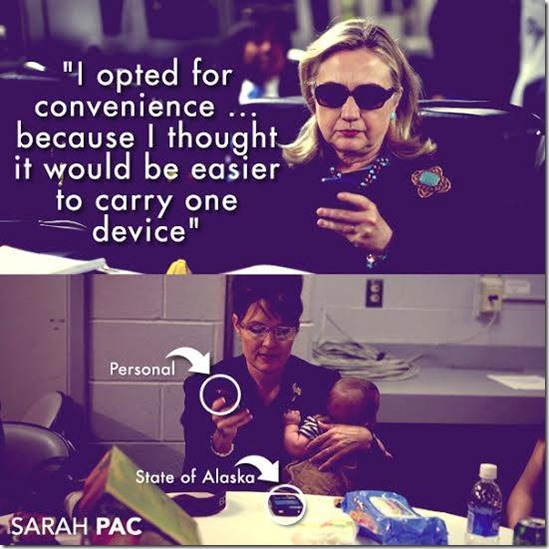 In an article published by Fox News on Monday, Palin criticized Hillary and her staff of “skirting” the law “altogether.” 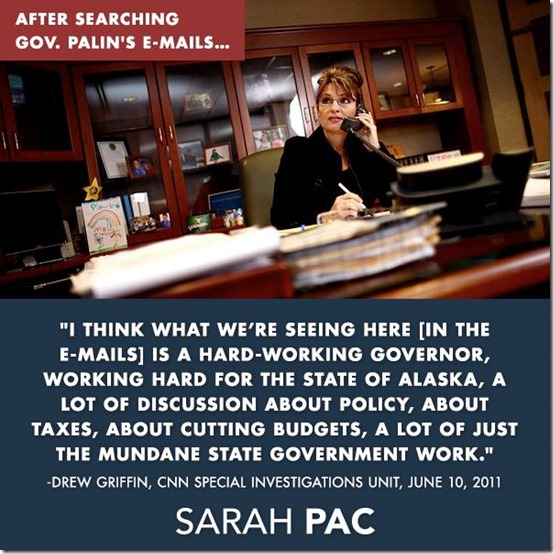 Palin Derangement Syndrome was created by a team of Jour’no’lists who were directed by the powers that be to discredit Sarah Palin, because they, RINOs and Progressives from both parties, feared her (and still do)… and the mainstream media carried their water! They feared her connection with average Americans so much that they continued the collusion with contrived lawsuits and endless fabricated negative press including attacks on Palin’s children. Palin was cleared of any and all wrong doing… in all the lawsuits filed.  Palin did the right thing and resigned as Governor of Alaska because she felt it was not fair to the people of her state for her to be spending so much of her time fighting these malicious lawsuits instead of working for them. The Democrats and Progressive from both parties then turned that into a negative by saying she was a quitter… not so by any stretch of the imagination.

“As Secretary of State under Obama, Hillary Clinton used private email accounts on a privately maintained server 100 percent of the time for 100 percent government business,” Palin wrote. “That’s unethical, no doubt illegal, and flies in the face of all claims of transparency.”

“Hillary Clinton and her staff weren’t trying to be in compliance with the law; they were skirting it altogether.”

She went on to say, “You’d expect more from the self-described ‘most transparent administration in history.'”

“And you should demand more from anyone who wants to be president someday,” Palin fired.

The Associated Press agrees with Palin, now suing the State Department to force the release of all of Hillary’s email correspondence and government documents from her four-year State tenure after multiple public records requests under the Freedom of Information Act (FOIA) went unanswered.

On Tuesday, breaking her nine-day silence on the scandal, the Hillary admitted that, in hindsight, it would have been better if she had used an official government email account.

“Again, looking back, it would’ve been better for me to use two separate phones and two email accounts,” Hillary said. “I thought using one device would be simpler, and obviously, it hasn’t worked out that way.”

If you haven’t seen it already, check out her explanation HERE.

I am a babyboomer and empty nester who savors every moment of my past and believes that it is the responsibility of each of us in my generation and Americans in general to make sure that America is as good or even a better place for future generations as it was for us. So far... we haven't done very well!! Favorite Quotes: "The first 50 years are to build and acquire; the second 50 are to leave your legacy"; "Do something that scares you every day!"; "The journey in between what you once were and who you are becoming is where the dance of life really takes place". At age 62 I find myself fighting inoperable uterine Cancer and thanks to the man upstairs and the prayers from so many people including many of my readers from AskMarion and JustOneMorePet... I'm beating it. After losing our business because of the economy and factors related to the re-election of President Obama in 2012 followed by 16-mos of job hunting, my architect-trained husband is working as a trucker and has only been home approximately 5-days a month since I was diagnosed, which has made everything more difficult and often lonely... plus funds are tight. Our family medical deductible is 12K per year for two of us; thank you ObamaCare. But thanks to donations from so many of you, we are making ends meet as I go through treatment while taking care of my father-in-law who is suffering from late stage Alzheimer's and my mother-in-law who suffers from RA and onset dementia as well as hearing loss, for which there are no caretaker funds, as I continue the fight here online to inform and help restore our amazing country. And finally I need to thank a core group of family, friends, and readers... all at a distance, who check in with me regularly. Plus, I must thank my furkids who have not left my side through this fight. You can see them at JustOneMorePet.
View all posts by Ask Marion →
This entry was posted in Elections, Knowledge Is Power, Politics, Wake Up, You Be the Judge and tagged emails, Hillary, Hillary Clinton, Palin, Sarah Palin, Sarah Palin 2016, Stop Hillary, Wake Up. Bookmark the permalink.