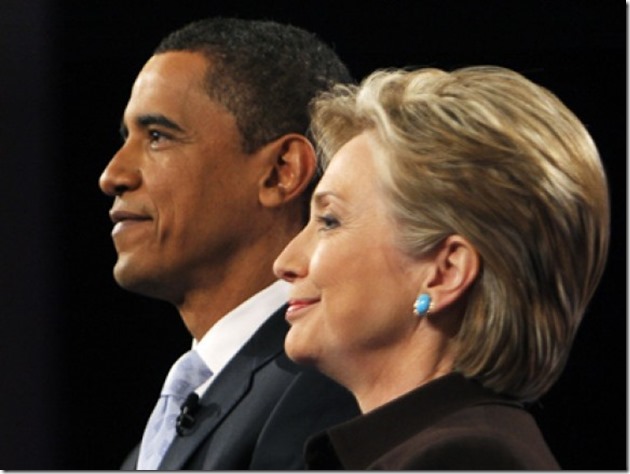 Two Sides of the Same Coin

By: Roger Aronoff  –  Accuracy in Media

As Hillary Clinton further delays the announcement of her 2016 run for the White House, more news has broken regarding her role in the 2011 disastrous intervention in Libya, which set the stage for the 2012 Benghazi attacks where we lost four brave American lives.

Two new stories from The Washington Times expose some of the infighting among government agencies and branches of government on this controversial decision, and highlight the key role that Clinton played in initiating the war. You can listen to tapes of discussions between Pentagon staffers, former Representative Dennis Kucinich (D-OH), and the Qaddafi regime for yourself.

This news also validates the Citizens’ Commission on Benghazi (CCB) 2014 interim report, which exposed that Muammar Qaddafi had offered truce talks and a possible peaceful abdication to the United States, which Washington turned down.

“[The article] also makes it clear that the Benghazi investigation needs to be broadened to answer the question: ‘Why did America bomb Libya in the first place?’” commented Rear Admiral Chuck Kubic (Ret.), a key source for the CCB’s interim report who was also quoted by the Times.

“Despite the willingness of both AFRICOM Commander Gen. Carter Ham and Muammar Qaddafi to pursue the possibility of truce talks, permission was not given to Gen. Ham from his chain of command in the Pentagon and the window of opportunity closed,” reads Kubic’s statement for our report from last year. You can watch here, from a CCB press conference last April, as Admiral Kubic described his personal involvement in the effort to open negotiations between Qaddafi and the U.S. government.

Now we learn that the likely source of the stonewalling came from the State Department—and Secretary Clinton—herself. “On the day the U.N. resolution was passed, Mrs. Clinton ordered a general within the Pentagon to refuse to take a call with Gadhafi’s son Seif and other high-level members within the regime, to help negotiate a resolution, the secret recordings reveal,” reported the Times on January 29.

Former Defense Secretary Bob Gates indicated in his book, Duty, that he was opposed to the war for national security reasons. He highlighted a division among White House advisors—with Susan Rice, Ben Rhodes, and Samantha Power “urging aggressive U.S. action to prevent an anticipated massacre of the rebels as Qaddafi fought to remain in power.” Add to that list the former Secretary of State.

“But that night, with Col. Muammar el-Qaddafi’s forces turning back the rebellion that threatened his rule, Mrs. Clinton changed course, forming an unlikely alliance with a handful of top administration aides who had been arguing for intervention,” reported The New York Times on March 18, 2011, the day after UN Resolution 1973 authorizing a “no fly” zone in Libya was voted on and passed.

“Within hours, Mrs. Clinton and the aides had convinced Mr. Obama that the United States had to act, and the president ordered up military plans, which Adm. Mike Mullen, chairman of the Joint Chiefs of Staff, hand-delivered to the White House the next day.”

The Washington Times now reports that “In the recovered recordings, a U.S. intelligence liaison working for the Pentagon told a Gadhafi aide that Mr. Obama privately informed members of Congress that Libya ‘is all Secretary Clinton’s matter’ and that the nation’s highest-ranking generals were concerned that the president was being misinformed” about a humanitarian crisis that didn’t exist. However, one must wonder just how much President Obama implicitly supported Clinton in her blind push to intervene in what was once a comparatively stable country, and an ally in the war against al Qaeda. While this new report is certainly damning of Mrs. Clinton’s actions, and appears to place the blame for the unnecessary chaos in Libya—which ultimately led to Benghazi—on her shoulders, President Obama shares the blame as the ultimate Decider-in-Chief.

“Furthermore, defense officials had direct information from their intelligence asset in contact with the regime that Gadhafi gave specific orders not to attack civilians and to narrowly focus the war on the armed rebels, according to the asset, who survived the war,” reports The Washington Times in its second of three articles. Saving those in Benghazi from a looming massacre by Qaddafi seems to have been a convenient excuse made by the administration for political expediency. Could it be, instead, that President Obama, as well as Mrs. Clinton, put greater value on the rise to power of an “Arab Spring” government with Muslim Brotherhood connections? And, as the CCB interim report shows, the U.S. government was willing to go so far as to facilitate the provision of arms to al-Qaeda-linked rebels in Libya in order to ensure that Qaddafi fell.

Will the mainstream media pick up on these new revelations, or will they cast them aside as another “phony scandal” to throw into their dustbins filled with other stories that might possibly embarrass the Obama administration, or prove to be an impediment to Mrs. Clinton’s path to the White House?

“It’s critical to note that Qaddafi was actively engaged with Department of Defense officials to arrange discussions about his possible abdication and exile when that promising development was squashed by the Obama White House,” noted CCB Member Clare Lopez, a former CIA officer, regarding the failed truce talks. “The Citizens’ Commission on Benghazi has been asking, ‘Why?’ for well over a year now.”

“It is time the American people and the families of those who fought and gave their lives at Benghazi in September 2012 were told why those brave Americans had to die at all, much less die alone with no effort made to save them,” she said.

Clinton, through House Democrats, has indicated that she is willing to testify before the House Select Committee on Benghazi. But Chairman Trey Gowdy (R-SC) recently indicated that the Committee must first examine her emails from the State Department before questioning his witness. This complicates the issue of her testifying, since Mrs. Clinton is in the process of calculating when she will announce her presidential run.

Do the emails that Gowdy has requested from the State Department even extend back to 2011?

Chairman Gowdy identified three “tranches” that his potential questioning would fall under in an interview with Fox’s Greta Van Susteren:

A fourth tranche should be: Clinton’s push to intervene in Libya and how it set the stage for an insecure country and strong jihadist movement willing—and able—to attack the Americans posted there. And while he’s at it, Rep. Gowdy should ask Mrs. Clinton to explain why all of the very legitimate requests for increased security in Benghazi were turned down, and why were Ambassador Chris Stevens’ personal security staff, from the State Department’s Diplomatic Security Service (DSS) directed to store their weapons in a separate location—not on them—on the night of September 11, 2012?

Qaddafi was willing to step down peacefully but Hillary prevented it

I am a babyboomer and empty nester who savors every moment of my past and believes that it is the responsibility of each of us in my generation and Americans in general to make sure that America is as good or even a better place for future generations as it was for us. So far... we haven't done very well!! Favorite Quotes: "The first 50 years are to build and acquire; the second 50 are to leave your legacy"; "Do something that scares you every day!"; "The journey in between what you once were and who you are becoming is where the dance of life really takes place". At age 62 I find myself fighting inoperable uterine Cancer and thanks to the man upstairs and the prayers from so many people including many of my readers from AskMarion and JustOneMorePet... I'm beating it. After losing our business because of the economy and factors related to the re-election of President Obama in 2012 followed by 16-mos of job hunting, my architect-trained husband is working as a trucker and has only been home approximately 5-days a month since I was diagnosed, which has made everything more difficult and often lonely... plus funds are tight. Our family medical deductible is 12K per year for two of us; thank you ObamaCare. But thanks to donations from so many of you, we are making ends meet as I go through treatment while taking care of my father-in-law who is suffering from late stage Alzheimer's and my mother-in-law who suffers from RA and onset dementia as well as hearing loss, for which there are no caretaker funds, as I continue the fight here online to inform and help restore our amazing country. And finally I need to thank a core group of family, friends, and readers... all at a distance, who check in with me regularly. Plus, I must thank my furkids who have not left my side through this fight. You can see them at JustOneMorePet.
View all posts by Ask Marion →
This entry was posted in Alerts, Elections, Get Involved, History, Knowledge Is Power, Lies, Military, News and politics, Politics, Religion, Wake Up, Watch the Other Hand, You Be the Judge and tagged 2016 Election, Benghazi, Bob Gates, Greta Van Susteran, Hillary, Hillary and Obama, Libya, Middle East, Muammar Qaddafi, politics, survival, Trey Gowdy. Bookmark the permalink.