By Dr. Becker -  Cross-posted at Just One More Pet:

In a truly spectacular coincidence, the very same brands of chicken jerky treats suspected of causing sickness and death in hundreds of dogs since 2007 have now been identified as being possibly contaminated with “unapproved” antibiotics. (Apparently the antibiotics are approved for use in China, where the treats are made, and in other countries, but not in the U.S.)

According to NBC News, right after the first of the year, the New York State Department of Agriculture and Markets (NYSDAM) informed the FDA it had found trace amounts of residual poultry antibiotics in several lots of Waggin’ Train and Canyon Creek Ranch brand dog treats, as well as Milo’s Kitchen Chicken Jerky and Chicken Grillers home-style dog treats.

Treats Have Been Voluntarily Recalled

The New York agriculture agency discovered very low levels of four drugs not approved for use in U.S. poultry, and one antibiotic that is approved for use, but for which quantities are strictly limited. The antibiotics found were sulfaclozine, tilmicosin, trimethoprim, enrofloxacin and sulfaquinoxaline.

The agency used new, highly sensitive technology to detect the presence of the antibiotics. The tests on the jerky treats were conducted in response to “growing consumer concerns.”

Whatever the reason, I’m extremely thankful NYSDAM took it upon themselves to run the tests. And while discovering antibiotic residue in food products is never “good news,” I’m grateful, in this case, something was found in those treats that caused them to be pulled off the market.

Needless to say, a spokesman for Nestle Purina says the issue with the antibiotics is in no way related to the issue with these very same chicken jerky treats that have allegedly sickened over 2,200 pets and killed well over 300.

The FDA also weighed in. From the agency’s January 9 CVM update:

Based on the FDA’s review of the NYSDAM results, there is no evidence that raises health concerns, and these results are highly unlikely to be related to the reports of illnesses FDA has received related to jerky pet treats. FDA commends Del Monte and Nestle-Purina for withdrawing these products from the market in response to this product quality issue. FDA also welcomes additional information about NYSDAM’s testing methodology, which is different and reportedly more sensitive than currently validated and approved regulatory methods.

As those of you who have been following this fiasco are aware, the FDA has conducted its own “extensive” testing and has to date been unable to find anything in the chicken jerky treats that would cause pet illness or death. Consequently, the agency maintains it is unable to take action to get the treats recalled, or even to effectively warn consumers of the potential for harm to their pets.

At Least for Now, Suspect Treats Are Off Store Shelves

It’s a small victory, but one that brings a sigh of relief. Tragically, for those pet owners who lost beloved companions, the recall does not help.

According to NBC news, a woman from New York whose 2 year-old pug died suddenly in 2011 after eating Waggin’ Train chicken jerky treats, said in a statement:

"How many lives could have been saved if, six years ago, when there was first doubt that the safety of our companions was compromised, the FDA and all manufacturers of imported chicken jerky had issued a precautionary recall until the toxin was found? How much pain and suffering could have been avoided if only they had met their moral obligation six years ago and did the job the taxpayers pay them to do?"

The Dangers of Genetically Modified Ingredients in Pet Food

When Raw Food is NOT the Right Food for Your Pet

Surprise, Surprise… the Best Food for Dogs Is Homemade Food

The Importance of Bones in Your Pet’s Diet

The Nutrient Your Pet Needs More of As They Age: Protein

Good Diet and Advice for Dogs with Pancreatitis

Beef Verses Bison for Dogs – Variety is critical for your pet to receive the full spectrum of amino acids, essential fatty acids, trace minerals, vitamins and antioxidants necessary to thrive.

Allergies and Springtime Ailments in Pets

Do Vaccinations Affect the Health of our Pets?

Dysbiosis: The Root Cause of Many Other Pet Health Problems

Cancer and Your Pet: Two Things to Avoid

Beef Verses Bison for Dogs – Variety is critical for your pet to receive the full spectrum of amino acids, essential fatty acids, trace minerals, vitamins and antioxidants necessary to thrive.

WHAT HUMAN FOODS ARE UNSAFE FOR PETS? (the 12 worst)–> chocolate, sugarless gum & artificial sweeteners, alcohol, yeast dough, grapes & raisins, Macadamia nuts, onions (bad for dogs and cats… but poison for cats), garlic (for cats), caffeine, fat trimmings and bones (bad for cats and limited fat and the right bones for dogs), raw eggs (for cats, but must be careful for dogs and humans), and milk.

Some of the best human foods for dogs: peanut butter (although peanuts and peanut butter can contain mold so could be bad for humans and dogs), cheese including cottage cheese (some some dogs can be prone to be lactose intolerant like people), yogurt, watermelon, honeydew and cantaloupe, blueberries, salmon, green beans, sweet potatoes, fresh raw carrots, pumpkin, and lean meat… cooked or raw.

Did You Know There are Two Kinds of Raw Pet Food on the Market?

Not Fit for a Dog!: The Truth About Manufactured Dog and Cat Food

See Spot Live Longer – How to help your dog live a longer and healthier life!

Raw and Natural Nutrition for Dogs: The Definitive Guide to Homemade Meals 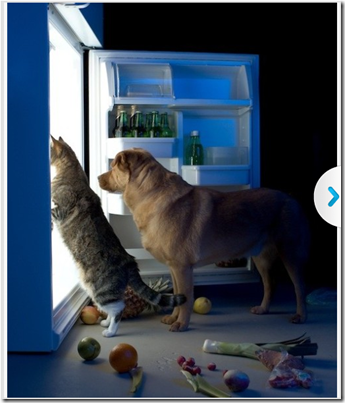 Keep your pets healthy and help extend their lives with:

The International Nestle company/group also owns Gerber Baby Foods… You be the judge!  Gerber was once a totally American owned company and Milo’s was until recently an independently American Owned companies.

I am a babyboomer and empty nester who savors every moment of my past and believes that it is the responsibility of each of us in my generation and Americans in general to make sure that America is as good or even a better place for future generations as it was for us. So far... we haven't done very well!! Favorite Quotes: "The first 50 years are to build and acquire; the second 50 are to leave your legacy"; "Do something that scares you every day!"; "The journey in between what you once were and who you are becoming is where the dance of life really takes place". At age 62 I find myself fighting inoperable uterine Cancer and thanks to the man upstairs and the prayers from so many people including many of my readers from AskMarion and JustOneMorePet... I'm beating it. After losing our business because of the economy and factors related to the re-election of President Obama in 2012 followed by 16-mos of job hunting, my architect-trained husband is working as a trucker and has only been home approximately 5-days a month since I was diagnosed, which has made everything more difficult and often lonely... plus funds are tight. Our family medical deductible is 12K per year for two of us; thank you ObamaCare. But thanks to donations from so many of you, we are making ends meet as I go through treatment while taking care of my father-in-law who is suffering from late stage Alzheimer's and my mother-in-law who suffers from RA and onset dementia as well as hearing loss, for which there are no caretaker funds, as I continue the fight here online to inform and help restore our amazing country. And finally I need to thank a core group of family, friends, and readers... all at a distance, who check in with me regularly. Plus, I must thank my furkids who have not left my side through this fight. You can see them at JustOneMorePet.
View all posts by Ask Marion →
This entry was posted in Family and Friends, Pets, Stand Up, Wake Up, You Be the Judge and tagged antibiotics, Canyon Creek Ranch, Cats, Chicken Grillers, chicken jerky pet treat recall, chicken jerky treats, China, Del Monte, dog food recall, dogs, FDA, healthy dog food, healthy pet food, homemade dog food, Homemade pet food, Milo's Kitchen, Nestle Purina PetCare, NYSDAM, pet food recall, pet treat recall, Pets, stem cell enhancers for pets, StemEquine, StemPet, Waggin’ Train. Bookmark the permalink.