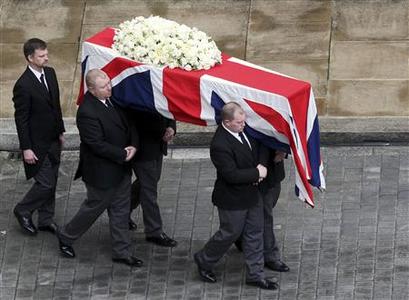 JoshuaPundit: Baroness Thatcher was laid to rest today in a state funeral attended by the Queen. Her flag-draped coffin was carried from a small chapel in Westminster to St. Paul’s Cathedral for the funeral service escorted by members of Britain’s military, including 700 veterans of the Falkland’s War.

The Angry Left had promised ‘violent protests’ and had promised they would pelt the coffin with eggs and coal. For a sample of that rhetoric, look at the comments section here.
In the end, thousands of people lined the road to pay tribute to the Iron Lady,many of them throwing white roses in her path while the promised ‘protest’ turned out to be a joke. According to Reuters, hardly a conservative friendly site, only about two dozen people booed or turned their backs on the coffin, chanted ‘ding dong the witch is dead’ or booed.

The Daily Mail was a little more charitable, characterizing the number of protesters as around 200 at most, scattered throughout the crowd.

While security was heavy, both the military and the police had said that they would not impede protest. And since the Thatcher Haters are not noted for qualities like common decency, I can only ascribe the lack of attendance to cowardice.

It’s one thing to make a speech to the converted, be a has been pop star singing an insulting song to try and resuscitate your career or to leave a hate-filled, anonymous comment on line.It’s another to go public, where you might just have to engage in a vigorous debate at street level, if you get my meaning.

The funeral service was attended by 2,300 mourners, including a number of heads of State including Canada’s PM Harper, Israel’s PM Netanyahu, PM Mario Monti of Italy and Polish PM Donald Tusk. The Obama Administration was conspicuous by its absence, saying it was ‘too busy’ to send anyone just now. America was represented by former Secretaries of State James Baker III, George Schultz and Henry Kissinger, all of whom attended as private persons. And by a private, mostly Republican delegation from the U.S. House of Representatives, including former Presidential candidate Michele Bachmann.  There was no official American envoy sent.

Margaret Thatcher was one of a kind, sadly. Thatcher and Reagan were fast friends and allies. She gave a moving tribute to Ronnie when he passed. It is a disgrace that no one from our government went to her funeral; no official envoy. I believe Michele Bachmann and a small delegation of mostly Republican U.S. Congressmen… members (including Marsha Blackburn), Senator John McCain, former V.P Dick Cheney and two former secretaries of state from the Reagan Era that worked with her, James Baker III and George Shultz as well as former SOS Henry Kissinger, went.  They all attended as private citizens. But Obama and company, as well as the Clintons and the Bushes, all stayed home. Shameful. – Teressa Monroe Hamilton, the NoisyRoom

It’s actually quite fitting that no one from the Obama Administration could be bothered to attend the funeral of one of our staunchest allies, a woman who played a large part oin defeating the Evil Empire.Mrs. Thatcher didn’t care much for commies and socialists in life, and I’m sure her spirit doesn’t miss them now.

One particularly moving moment in the service came when Baroness Thatcher’s grandaughter Amanda Thatcher, 19, read from the book of Ephesians to mourners.
Her reading, delivered with remarkable poise and confidence called for the righteous to put ‘on the whole armor of God that ye may be able to stand against the wiles of the devil’.
And one off putting note came from the Bishop of London, Richard Chartres, who in his remarks at the funeral called Thatcher ‘just an ordinary woman’ and referenced the Tolpuddle martyrs, a 19th century group of icons for Britain’s trade unions, whose strangling grip on Britain’s faltering economy was successfully broken during Thatcher’s administration.

Amanda Thatcher, 19, drew particular accolades for her composure as she read a New Testament verse that spoke to her grandmother’s strength: “We wrestle not against flesh and blood, but against principalities, against powers, against the rulers of the darkness of this world, against spiritual wickedness in high places.” …WAPO

The Bishop, like a lot of Church of England clergy is fairly Left wing in his outlook (Thatcher, by the way was a Methodist) so his remarks were not entirely unexpected.
Margaret Thatcher was not ‘just an ordinary woman’. She was an extraordinary woman from an ordinary background. There’s a big difference.

Quite simply, she was one of those rare people who saw something wrong and decided to do something about it, and she refused to be put off. She had her defeats, and her autobiography recounts them. But she had her victories too. And in the end, what matters is that she was willing to get in to the arena in the first place, because someone had to. In the end, she fought the battles she had to fight and left things better than she found them, which is all you can really ask of a leader.

So the greengrocer’s daughter who changed so much has made the passage, to be reunited with her beloved Denis and her great friend Ronald Reagan.

A number of people along the procession and in the service were openly weeping as they said goodbye to Baroness Thatcher today. She was a symbol of Britain’s greatness, and perhaps part of what they found so sad was their sense that greatness has departed and will not return.

Despicable But Not Unexpected: Obama Refuses To Send Envoy To Margaret Thatcher’s Funeral

Why Obama’s Snub of Thatcher’s Funeral Is No Surprise

The 25 Margaret Thatcher Quotes that Crush Obama and the Left

Margaret Thatcher, the grocer’s daughter who became Britain’s first female prime minister, is getting a funeral fit for a queen

The Grocer’s Daughter – Margaret Thatcher not only broke a glass ceiling; she broke a class ceiling

How Thatcher Changed Hearts and Minds Behind the Iron Curtain

I am a babyboomer and empty nester who savors every moment of my past and believes that it is the responsibility of each of us in my generation and Americans in general to make sure that America is as good or even a better place for future generations as it was for us. So far... we haven't done very well!! Favorite Quotes: "The first 50 years are to build and acquire; the second 50 are to leave your legacy"; "Do something that scares you every day!"; "The journey in between what you once were and who you are becoming is where the dance of life really takes place". At age 62 I find myself fighting inoperable uterine Cancer and thanks to the man upstairs and the prayers from so many people including many of my readers from AskMarion and JustOneMorePet... I'm beating it. After losing our business because of the economy and factors related to the re-election of President Obama in 2012 followed by 16-mos of job hunting, my architect-trained husband is working as a trucker and has only been home approximately 5-days a month since I was diagnosed, which has made everything more difficult and often lonely... plus funds are tight. Our family medical deductible is 12K per year for two of us; thank you ObamaCare. But thanks to donations from so many of you, we are making ends meet as I go through treatment while taking care of my father-in-law who is suffering from late stage Alzheimer's and my mother-in-law who suffers from RA and onset dementia as well as hearing loss, for which there are no caretaker funds, as I continue the fight here online to inform and help restore our amazing country. And finally I need to thank a core group of family, friends, and readers... all at a distance, who check in with me regularly. Plus, I must thank my furkids who have not left my side through this fight. You can see them at JustOneMorePet.
View all posts by Ask Marion →
This entry was posted in Knowledge Is Power, low-informed voters, News and politics, Patriotism, Politics, Remembering, Strength, You Be the Judge and tagged ally, Britain, cold war ally, conservatism, conservative women, disrespect, haters, History, leadership, Margaret Thatcher, Obamaland, politics, remembering, Ronald Reagan, strength, The Iron Lady. Bookmark the permalink.