The Origins of Communism in California

Examining the long march to Communism in California shows that it took Progressives over a hundred years to achieve their totalitarian California dream.

In 1879, the NY Times reported on the new California Constitution which was instigated by… wait for it… the Labor Party. Wouldn’t you know, community organizers peddling their Communism way back then. In the article, “Communism in California”, notice that their oppressive, totalitarian dream was instituted through taxation and taking control of land and railways. Does this sound similar to what they’re doing at an accelerated pace today? It certainly parallels what Nancy Pelosi brought to the House floor in 1992, which she called “Agenda 21” and said it is the United Nations (UN) Sustainable Development program.

Most notable in the 1879 NY Times article is the authors apparent realization of the danger of enacting a mild form of Socialism that would lead to a Communist California, while at the same time finding comfort in the fact that it’s happening in a “distant part of the country”. The author may have presumed it would prove disastrous before infecting other States and spreading throughout the US like a violent and deadly virus. Little did the author know that it would be emanating from our very own White House, with an iron fist, within 130 years.

“… it is clear that the efforts of the conservative people of California have not been able to stem the tide which has lately set toward Communism in the Golden State. It must be said that the experiment of a mild form of Socialism is now about to be tried in one of the States of the Republic. Perhaps it is just as well that it should be tried in a distant part of the country, and in a State which always makes much of its own griefs, as well as of its own advantages. There never was a serious desire for a remodeling of the Constitution of California until the so-called Labor Party became an important factor in the politics of the State…”

“The adoption of the new Constitution, absurd as it may be in some of its provisions, is the manifestation of a rebellion against what is called “the tyranny of capital.” It is a violent remedy for actual ills. It is a practical overturning of the principles that have governed American commercial life ever since the foundation of the Republic. Many requirements of the new Constitution are impossible of execution. Others will be evaded by corrupt officers. But enough will remain to bring disaster and financial distress upon the people.”

Many lament what California has become and, despite the beauty of this State, people and businesses are leaving as fast as they can. On the other hand, Communists like Van Jones and the Union leaders who control this State enjoy calling California their “home” while they live in the lap of luxury courtesy of people like George Soros and Barack Obama (through our tax dollars, of course). 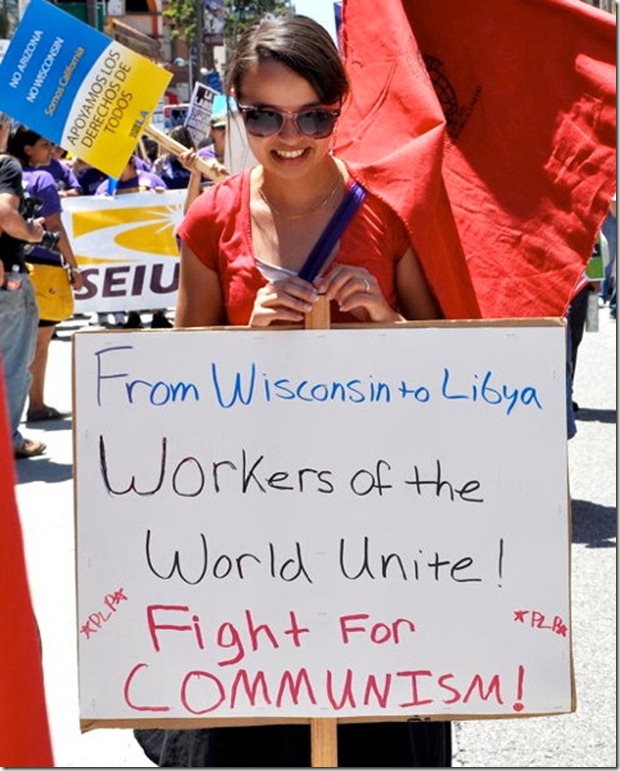 A May Day rally in Los Angeles, co-sponsored by the SEIU and various communist groups, as well as other unions, reflected yet another step in the normalization of self-identified communist and socialist ideologies in the Obama era. Not only did the SEIU help to organize the rally in conjunction with communists, they marched side-by-side with communists, while union members carried communist flags, communists carried union signs, and altogether there was no real way to tell the two apart.

The communists freely and proudly declare their affiliation. And the SEIU has no problem marching arm-in-arm with them. 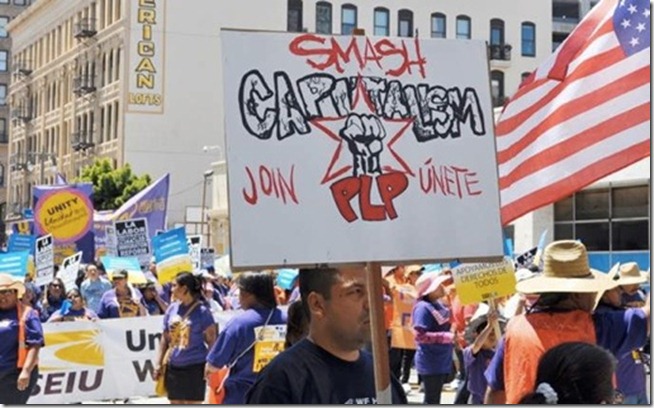 “Smash Capitalism” is a slogan the SEIU apparently endorses – or at least doesn’t mind marching behind. In case you think the SEIU is some peripheral out-of-the-mainstream organization:

The SEIU devoted $28 million to Obama’s campaign, making the SEIU “the organization that spent the most to help Barack Obama get elected president.” 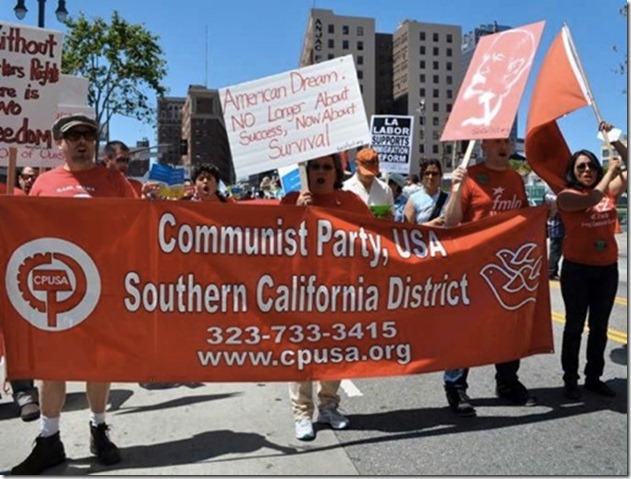 Did I say communists? Sorry, I meant Communists (with a capital “C”). Note how the Communists that day (like the women on the right in this photo) carried solid red flags symbolizing their ideology. Keep that in mind as you view the next photo.

One of the SEIU leaders picked up a Communist flag and led a contingent of rank-and-file SEIU members. Everyone was OK with that. 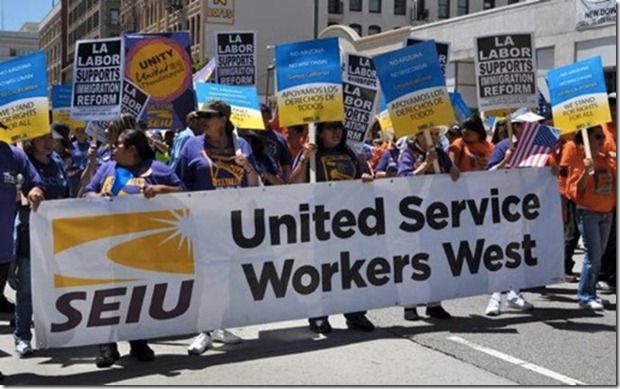 The way you can identify the SEIU members in all these pictures: They’re the ones in purple T-shirts carrying blue-and-yellow signs. 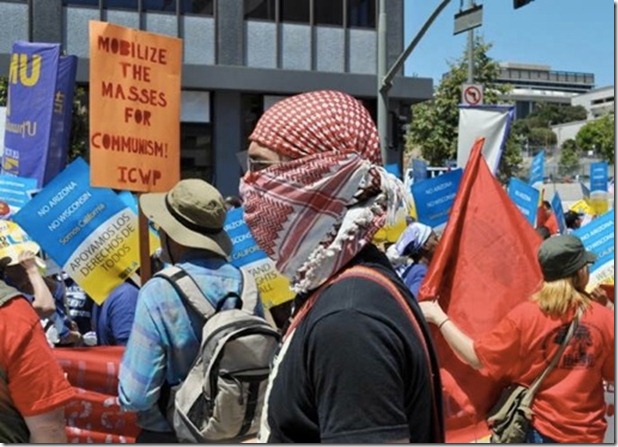 So, as you can see, the communists and the union members intermingled as the march progressed.

In case you were wondering what the SEIU was saying during all of this, There is a video of the SEIU chanting “Legalization or REVOLUTION!” Clear enough? 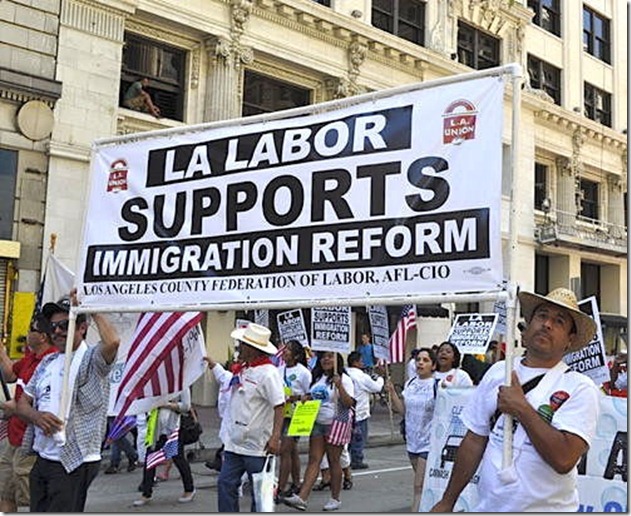 And it wasn’t just the SEIU at the march – other “normal” unions like the AFL-CIO were on hand as well.There were plenty of teachers’ unions attending too, and they brought along many of their public school students for some good old-fashioned communist indoctrination. 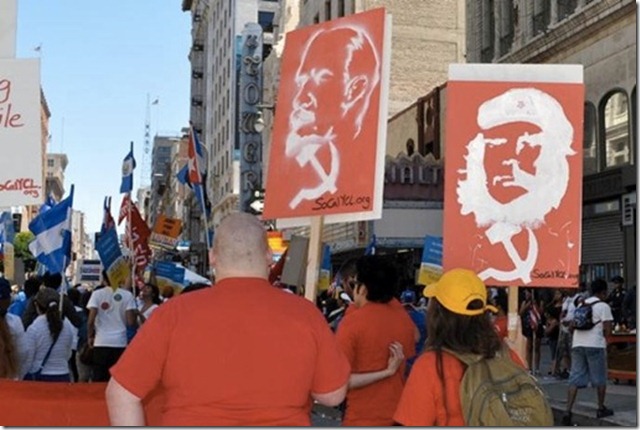 Most in the US who walk around with Che buttons or Che shirts do so simply because they foolishly think he’s “cool.” These hardcore communists carry his image not because he’s “cool,” but because he was one of the most radical revolutionaries who ever lived. Right up there with Lenin, apparently. 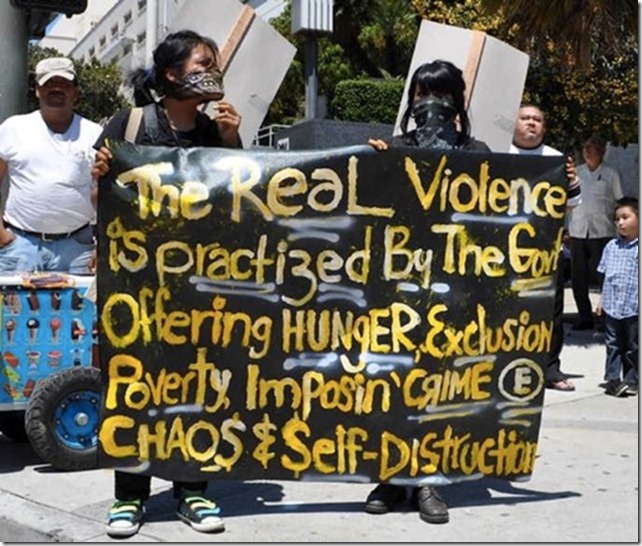 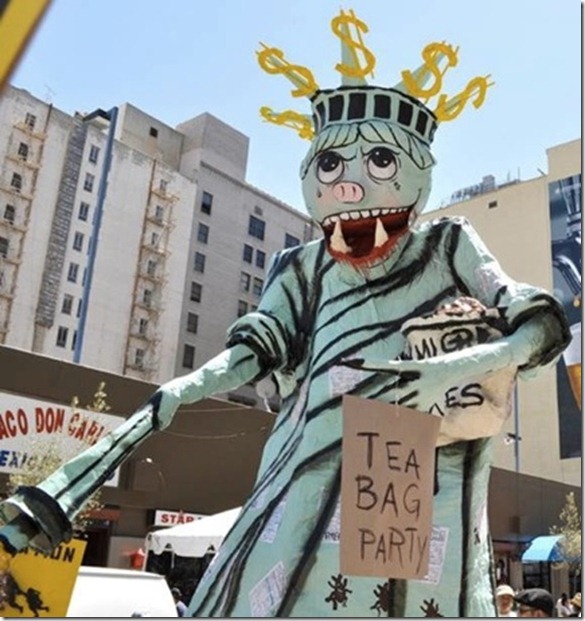 In order to have a more “civil dialogue” with their political opponents, the marchers made a puppet of a demonic Statue of Liberty aligned with the “Tea Bag Party.” 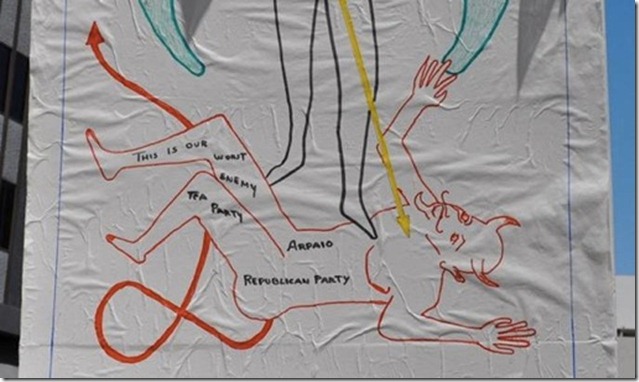 OK, I guess Hitler comparisons are off the table for now – too many people have called it taboo. So what’s second best? The Devil! 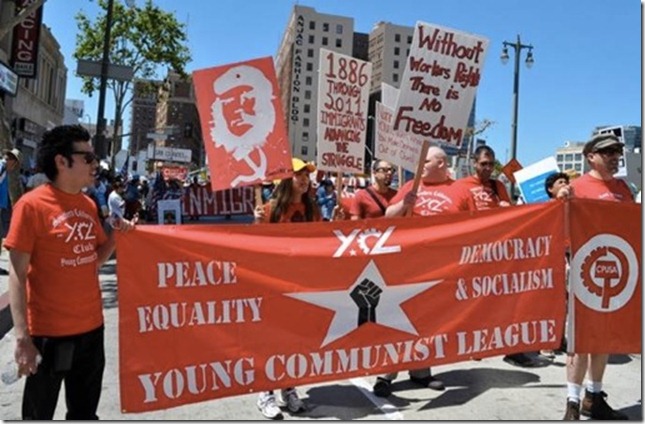 Tell me the honest truth: If the Tea Party had marched in a rally behind a banner held up by fascists or neo-Nazis, don’t you think it would have been national news? But the nation’s biggest Obama-supporting political organization marched behind banners like these, and not a peep about it in the media. Hmmmm..

Until recently, the average American has regarded fascists and communists as equally noxious and equally malignant. As well they should have. But the drive these days by the left side of the spectrum is to make communism and socialism somewhat less remarkable and more palatable. For two years they angrily denied the Tea Party accusation that Obama’s policies and supporters had a socialist bent.

But in recent months, as the accusation had started to gain traction, the new leftist tactic has become: “What’s so bad about socialism after all? You’re demonizing a very popular and respectable ideology!”

Video: Communists and SEIU Members march together at May Day Demonstration, L.A., CA

I am a babyboomer and empty nester who savors every moment of my past and believes that it is the responsibility of each of us in my generation and Americans in general to make sure that America is as good or even a better place for future generations as it was for us. So far... we haven't done very well!! Favorite Quotes: "The first 50 years are to build and acquire; the second 50 are to leave your legacy"; "Do something that scares you every day!"; "The journey in between what you once were and who you are becoming is where the dance of life really takes place". At age 62 I find myself fighting inoperable uterine Cancer and thanks to the man upstairs and the prayers from so many people including many of my readers from AskMarion and JustOneMorePet... I'm beating it. After losing our business because of the economy and factors related to the re-election of President Obama in 2012 followed by 16-mos of job hunting, my architect-trained husband is working as a trucker and has only been home approximately 5-days a month since I was diagnosed, which has made everything more difficult and often lonely... plus funds are tight. Our family medical deductible is 12K per year for two of us; thank you ObamaCare. But thanks to donations from so many of you, we are making ends meet as I go through treatment while taking care of my father-in-law who is suffering from late stage Alzheimer's and my mother-in-law who suffers from RA and onset dementia as well as hearing loss, for which there are no caretaker funds, as I continue the fight here online to inform and help restore our amazing country. And finally I need to thank a core group of family, friends, and readers... all at a distance, who check in with me regularly. Plus, I must thank my furkids who have not left my side through this fight. You can see them at JustOneMorePet.
View all posts by Ask Marion →
This entry was posted in Dumbing Down of America, Freedom, Knowledge Is Power, Politics, Wake Up, Watch the Other Hand and tagged Agenda 21, brainwashing our kids, Communism in California, Communist Party USA, Communists, educate yourself, History, Nancy Pelosi, Progressive Movement, Progressives. California, SEIU, stand-up America, unions. Bookmark the permalink.

3 Responses to The Origins of Communism in California