Yes, once again, It’s time to present this week’s statuette of shame, The Golden Weasel!!

Every Tuesday, the Council nominates some of the slimiest, most despicable characters in public life for some deed of evil, cowardice or corruption they’ve performed. Then we vote to single out one particular Weasel for special mention, to whom we award the statuette of shame, our special, 100% plastic Golden Weasel. This week’s nominees were all particularly slimy and despicable, but the votes are in and we have our winner…the envelope please… 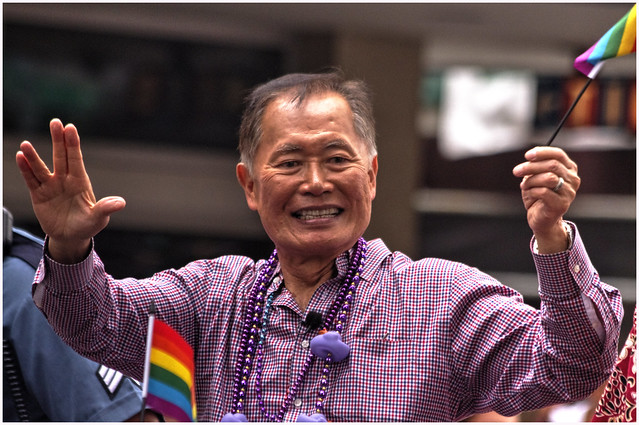 The Noisy Room: My nomination this week goes to raving moonbat, George Takei, who frankly should have stayed in space, his last frontier.  Uber Leftist actor and activist George Takei, known for his role as Hikaru Sulu in “Star Trek,” said that he and his husband are “overjoyed” by the Supreme Court’s legalization of same-sex marriage. But his shocking comments about conservative Justice Clarence Thomas were just over the rainbow on this one:

“He is a clown in blackface sitting on the Supreme Court. He gets me that angry,” Takei said, visibly flustered as he railed against the African American justice. ”For him to say slaves had dignity … I mean, doesn’t he know slaves were chained? That they were whipped on the back?”

Takei shows his idiocy in all its glory here. He was railing against Thomas’ dissent on the gay marriage ruling:

Thomas, who is unarguably a brilliant litigator and a great man, made a compelling dissent on the ruling. It was epic. Takei’s comment were just profoundly biased and stupid. He called Thomas an “embarrassment” who doesn’t deserve to serve on the Supreme Court, citing in a separate op-ed his own experience living in an internment camp as a child. He would have done better to actually study constitutional law and parse his words more judiciously rather than coming unglued in a Liberal frenzy of incoherence and uninformed lunacy. I agree with one young black conservative woman out there who did a video after the Supreme Court ruling in answer to racist Liberals: “It takes a certain kind of racist to decide that black people can’t have their own opinion.” For being an unconstitutional racist and bigot, Takei has earned a Golden Weasel. Damn it, Jim! He’s earned it!!

Puma By Design :One of actor and member of the gay gestapo, George Takei’s pink jackboots ended up in his mouth after missing the throat of Supreme Court Justice, Clarence Thomas, last week when Takei went on a racist rant against Thomas for his dissenting opinion in the Supreme Court ruling on Obergefell v. Hodges legalizing same sex marriage in all fifty states.

GEORGE TAKEI: “He is a clown in blackface sitting on the Supreme Court. He gets me that angry. He doesn’t belong there. And for him to say, slaves have dignity. I mean, doesn’t he know that slaves were in chains? That they were whipped on the back. If he saw the movie 12 Years a Slave, you know, they were raped. And he says they had dignity as slaves or – My parents lost everything that they worked for, in the middle of their lives, in their 30s. His business, my father’s business, our home, our freedom and we’re supposed to call that dignified? Marched out of our homes at gun point. I mean, this man does not belong on the Supreme Court. He is an embarrassment. He is a disgrace to America.”

In fact, Takei’s rant was so reprehensible that CNN’s Communist race baiter, Marc Lamont Hill, criticized Takei for his “black face” rant on CNN and Twitter (see below) while making it clear that Hill was in no way standing up for Thomas considered by Hill and other Blacks on the left to be a sellout to his race and the Progressive plantation.

On Friday Takei walked back his remarks by posting an apology on his Facebook page (excerpt below:

I recently was asked by a reporter about Justice Clarence Thomas’s dissent in the marriage equality cases, in which he wrote words that really got under my skin, by suggesting that the government cannot take away human dignity through slavery, or though internment. In my mind that suggested that this meant he felt the government therefore shouldn’t be held accountable, or should do nothing in the face of gross violations of dignity. When asked by a reporter about the opinion, I was still seething, and I referred to him as a “clown in blackface” to suggest that he had abdicated and abandoned his heritage. This was not intended to be racist, but rather to evoke a history of racism in the theatrical arts. While I continue to vehemently disagree with Justice Thomas, the words I chose, said in the heat of anger, were not carefully considered.

Takei’s apology is nothing more than quintessential dribble typical of Marxist antagonists whose jackboot of bigotry and intolerance ends up in their mouths instead of on the neck of their targets.

Takei went on the racist rant Monday during an interview in Phoenix, in response to Thomas’ comments regarding the Supreme Court decision on gay marriage:

He eventually “apologized” on Facebook in the most weaselly fashion imaginable – by claiming victimhood himself.

I recently was asked by a reporter about Justice Clarence Thomas’s dissent in the marriage equality cases, in which he wrote words that really got under my skin, by suggesting that the government cannot take away human dignity through slavery, or though internment. In my mind that suggested that this meant he felt the government therefore shouldn’t be held accountable, or should do nothing in the face of gross violations of dignity. When asked by a reporter about the opinion, I was still seething, and I referred to him as a “clown in blackface” to suggest that he had abdicated and abandoned his heritage. This was not intended to be racist, but rather to evoke a history of racism in the theatrical arts. While I continue to vehemently disagree with Justice Thomas, the words I chose, said in the heat of anger, were not carefully considered.

Yes. George Takei’s pinhead rant certainly took the honors this week! Ah, the joys of being a perennial victim, mental health issues aside. Come up and get your statuette, Mr. Sulu, I’m sure this Golden Weasel will really send you into orbit in the future as you explore strange galaxies and boldly go where  no man has gone before..or something like that.

Well, there it is.

Check back next Tuesday to see who next week’s nominees for Weasel Of The Week are!

Make sure to tune in every Monday for the Watcher’s Forum, and remember, every Wednesday, the Council has its weekly contest with the members nominating two posts each, one written by themselves and one written by someone from outside the group for consideration by the whole Council. The votes are cast by the Council, and the results are posted on Friday morning.

It’s a weekly magazine of some of the best stuff written in the blogosphere, and you won’t want to miss it…or any of the other fantabulous Watcher’s Council content.

I am a babyboomer and empty nester who savors every moment of my past and believes that it is the responsibility of each of us in my generation and Americans in general to make sure that America is as good or even a better place for future generations as it was for us. So far... we haven't done very well!! Favorite Quotes: "The first 50 years are to build and acquire; the second 50 are to leave your legacy"; "Do something that scares you every day!"; "The journey in between what you once were and who you are becoming is where the dance of life really takes place". At age 62 I find myself fighting inoperable uterine Cancer and thanks to the man upstairs and the prayers from so many people including many of my readers from AskMarion and JustOneMorePet... I'm beating it. After losing our business because of the economy and factors related to the re-election of President Obama in 2012 followed by 16-mos of job hunting, my architect-trained husband is working as a trucker and has only been home approximately 5-days a month since I was diagnosed, which has made everything more difficult and often lonely... plus funds are tight. Our family medical deductible is 12K per year for two of us; thank you ObamaCare. But thanks to donations from so many of you, we are making ends meet as I go through treatment while taking care of my father-in-law who is suffering from late stage Alzheimer's and my mother-in-law who suffers from RA and onset dementia as well as hearing loss, for which there are no caretaker funds, as I continue the fight here online to inform and help restore our amazing country. And finally I need to thank a core group of family, friends, and readers... all at a distance, who check in with me regularly. Plus, I must thank my furkids who have not left my side through this fight. You can see them at JustOneMorePet.
View all posts by Ask Marion →
This entry was posted in Asshats, Knowledge Is Power, News and politics, Progressivism, You Be the Judge and tagged bloggers, Forums, politics, The Watcher's Council, Watcher of Weasels. Bookmark the permalink.