By Marion Algier – h/t to AppSame ‏@AppSame for war photos 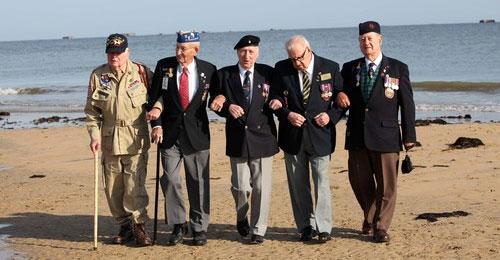 President Ronald Reagan on June 6, 1984, the 40th anniversary of D-Day

This article was originally posted by Breitbart News’ Jarrett Stepman  for the 70th anniversary of D-Day:

On June 6, 1984, the 40th anniversary of D-Day, President Ronald Reagan stood on what he called a “lonely, windswept point on the northern shore of France” to deliver an oration that would become known as his “Boys of Pointe du Hoc” speech. He made this speech in front of 62 survivors of the 2nd Ranger Battalion who courageously scaled the 100 ft. high cliffs on that fateful day.

The 225 Rangers who fought at Pointe-du-Hoc demonstrated almost unimaginable bravery and took heavy losses in the battle. In their attempt to take the important strategic location–135 Rangers would lose their lives. To put this in perspective, only 110 of the 670 British cavalrymen were killed in the famously doomed “Charge of the Light Brigade” during the Crimean War.

Historian Douglas Brinkley wrote in his book The Boys of Pointe du Hoc LP: Ronald Reagan, D-Day, and the U.S. Army 2nd Ranger Battalion, “With Reagan as president, the time had come for the World War II generation to speak out. By 1984, the stars were aligned for thousands of these stoic war heroes to finally offer eyewitness testimonials for posterity’s sake. It was, in essence, a generational reckoning.”

The speech that Reagan delivered, written by Peggy Noonan, rivals some of the greatest patriotic orations in American history, such as

Rep. Daniel Webster (R-FL) ’s Plymouth Oration and Abraham Lincoln’s Second Inaugural Address. It was one of the most profound tributes to the generation that won World War II, and more than that, affirmed that the United States would continue to be a force for good in a world of darkness. By describing how America defeated the Nazis and liberated Europe from their barbaric grasp, he was also aiming at the Communist Soviet Union that still held tight to the Eastern bloc.

Noonan explained how the subtext of the speech was most important and Reagan’s true purpose:

The subtext was a message aimed at the leaders of the West and the people of Europe. It was: Fellow NATO members, you must remember that just as our fathers beat back the totalitarian Nazis, we now must beat back the totalitarian Soviets–and we can do it, we can triumph if we hold fast, hold firm and stand together just as our fathers did 40 years ago.

Noonan said that this speech was not just a “commemorative event,” but an attempt to “exhort, persuade, and move history.” The result was one of the finest speeches the “Great Communicator” ever delivered.

We are in the midst of America’s Patriotic Season which includes Memorial Day, D-Day, 4th of July and Veteran’s Day. Remember those who gave their youth, their best, their lives so that America could thrive and survive and so that Americans could remain to be free.

I am a babyboomer and empty nester who savors every moment of my past and believes that it is the responsibility of each of us in my generation and Americans in general to make sure that America is as good or even a better place for future generations as it was for us. So far... we haven't done very well!! Favorite Quotes: "The first 50 years are to build and acquire; the second 50 are to leave your legacy"; "Do something that scares you every day!"; "The journey in between what you once were and who you are becoming is where the dance of life really takes place". At age 62 I find myself fighting inoperable uterine Cancer and thanks to the man upstairs and the prayers from so many people including many of my readers from AskMarion and JustOneMorePet... I'm beating it. After losing our business because of the economy and factors related to the re-election of President Obama in 2012 followed by 16-mos of job hunting, my architect-trained husband is working as a trucker and has only been home approximately 5-days a month since I was diagnosed, which has made everything more difficult and often lonely... plus funds are tight. Our family medical deductible is 12K per year for two of us; thank you ObamaCare. But thanks to donations from so many of you, we are making ends meet as I go through treatment while taking care of my father-in-law who is suffering from late stage Alzheimer's and my mother-in-law who suffers from RA and onset dementia as well as hearing loss, for which there are no caretaker funds, as I continue the fight here online to inform and help restore our amazing country. And finally I need to thank a core group of family, friends, and readers... all at a distance, who check in with me regularly. Plus, I must thank my furkids who have not left my side through this fight. You can see them at JustOneMorePet.
View all posts by Ask Marion →
This entry was posted in Freedom, History, Holidays, Knowledge Is Power, Military, Patriotism, Remembering and tagged America's Patriotic Season, D-Day, France, Germany, History, military, Normandy, Normandy Invasion, Reagan, remembering, Sacrafice, speeches, War, WWII. Bookmark the permalink.