Every Tuesday, the Council nominates some of the slimiest, most despicable characters in public life for some deed of evil, cowardice or corruption they’ve performed. Then we vote to single out one particular Weasel for special mention, to whom we award the statuette of shame, our special, 100% plastic Golden Weasel. This week’s nominees were all disgusting but one of them stood out as an almost unanimous choice. The envelope please… 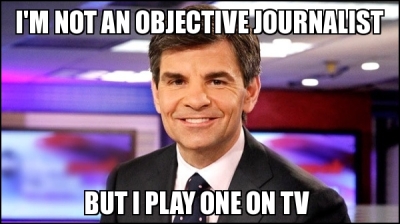 The Clintons’ Own Media Meat Puppet George ‘What Donations?’ Stephanopoulos!!

The Noisy Room: My nomination this week goes to George Stephanopoulos for failing to disclose that he donated $75,000 to the Clinton Foundation and was obviously biased in his coverage and defense of Hillary Clinton. As the New York Post so astutely put it the bigger they are, the dumber they think we are:

Dan Rather of CBS was toppled by a phony document scam. Lyin’ Brian
Williams at NBC casually mixed fact with self-aggrandizing fiction.
Now George Stephanopoulos is caught in a Clinton web of deceit at ABC.

The hat trick of arrogant anchor scandals helps explain why
Americans don’t trust network news. With apologies to Walter
Cronkite, that’s the way it is, and the way it is stinks.

Stephanopoulos shares with Rather and Williams the rotten
distinction of fessing up only after being exposed by real
journalists. In his case, the Washington Free Beacon
uncovered his secret donations to the
Clinton Foundation and contacted ABC for a response.

Of course, just before the crapola hit the media fan, Stephanopoulos ran
to the Leftist rag, Politico, and vomited a confession. This was after
trying to cover it up. He didn’t tell his bosses about the donations and
he didn’t tell viewers that he had given money to the Foundation even as
he reported on it and the Clintons.

On April 26, Stephanopoulos put Peter Schweizer in the hot seat; he’s
the author of the sensational”Clinton Cash” book that exposes the
Clintons and their graft. Stephanopoulos pressed him to admit the book
contains no ‘smoking gun.’ The implication was that, if it’s not
indictable, it’s not important. He sounded more like a lawyer than a
media hack. Stephanopoulos cleverly used that standard to give the
Clintons the all-clear. The anchor also cited Schweizer’s ‘partisan
interest,’ noting that Schweizer was a speechwriter for President George
W. Bush. Boy, pot meet kettle.

Another media sycophant bites the dust amid lies and scandal. Flip this
media shill – he’s done. Another Progressive weasel gets whacked.

Ah, yes, the Clinton’s own Greek Trojan Horse.Actually even more of interest than the donations to me – after all, $75K is just a step above pocket change for a media talking head with an 8 figure yearly income – is the huge amount of time Stephanopoulos spent working for the Clinton Foundation h0sting events and quite possibly inducing others to donate. Since that foundation appears to be nothing more than a way for the Clintons to park tax free income for selling their offices their influence, and their country.Did George receive some of the swag for his complicity in this? I wouldn’t be at all surprised. Nor do I think he’ll be fired. The strategy the Clintons and their ilk pursue is lie, deny and delay, and media whores like Stephanopoulos aid and abet them. Six months later when the truth comes out, the American people are tired of hearing about it and weary of trying to fit all the convoluted pieces together, so it recedes from the public consciousness.

But we honor Weasels here, do we not? And George Stephanopoulos appears to be a weasel second only to his owners, the Clintons. Please come up and get your statue.

Well, there it is!

I am a babyboomer and empty nester who savors every moment of my past and believes that it is the responsibility of each of us in my generation and Americans in general to make sure that America is as good or even a better place for future generations as it was for us. So far... we haven't done very well!! Favorite Quotes: "The first 50 years are to build and acquire; the second 50 are to leave your legacy"; "Do something that scares you every day!"; "The journey in between what you once were and who you are becoming is where the dance of life really takes place". At age 62 I find myself fighting inoperable uterine Cancer and thanks to the man upstairs and the prayers from so many people including many of my readers from AskMarion and JustOneMorePet... I'm beating it. After losing our business because of the economy and factors related to the re-election of President Obama in 2012 followed by 16-mos of job hunting, my architect-trained husband is working as a trucker and has only been home approximately 5-days a month since I was diagnosed, which has made everything more difficult and often lonely... plus funds are tight. Our family medical deductible is 12K per year for two of us; thank you ObamaCare. But thanks to donations from so many of you, we are making ends meet as I go through treatment while taking care of my father-in-law who is suffering from late stage Alzheimer's and my mother-in-law who suffers from RA and onset dementia as well as hearing loss, for which there are no caretaker funds, as I continue the fight here online to inform and help restore our amazing country. And finally I need to thank a core group of family, friends, and readers... all at a distance, who check in with me regularly. Plus, I must thank my furkids who have not left my side through this fight. You can see them at JustOneMorePet.
View all posts by Ask Marion →
This entry was posted in Alerts, Knowledge Is Power, Lies, Media, News, News and politics, Politics, Progressivism, Wake Up, You Be the Judge and tagged Clinton Foundation, Forums, journalism, journalists, media, news, politics, Stephanopoulos, The Clintons, Watcher's Council, Weasels. Bookmark the permalink.