With the ObamaCare mandate attack on the Catholic Church and on freedom of religion in 2012, Glenn Beck and many religious and Constitutional patriots have declared, “We are all Catholics now!”  Well in much of the world that is the case every Mardi Gras season… until it is time for Lent.

This year Shrove Tuesday (also known as Pancake Day, Mardi Gras, and Fat Tuesday) is 2.17.15, the day preceding Ash Wednesday… the first day of Lent. Shrove Tuesday is primarily celebrated in English speaking countries, but is also observed in the Philippines and Germany.

Most people do not even make the religious connection to Mardi Gras and far too often Mardi Gras, Karnivale, Fasching, Carnaval, Karneval or whatever they call it in the various Catholic regions of the world where it is celebrated spend a season, at least a week and definitely Fat Tuesday binge drinking as part of one giant and ongoing party.

I took part in a full week of Fasching in Freschen, Germany right outside of Köln or Cologne in my mid-twenties and must admit that I saw the bottom of my glass, at least for a moment, far too often that week until it was quickly refilled and I loved every minute of it.  Don’t tell my kids.

Karneval, Mardi Gras, Fasching, Carnival, Karnivale is celebrated in many Catholic areas in the world. The ones that come to mind immediately in most people’s minds are Mardi Gras in Rio de Janeiro, Brazil and New Orleans in the USA, but they are hardly the only places. It is celebrated worldwide, so fun lovers can party with the world, regardless of where they are or what their religion!

One of the biggest festivals in the U.S. outside of New Orleans is in St. Louis at the annual one day Mardi Gras celebration in Soulard.  But in the main spots where it is celebrated in Europe the big celebration lasts for a week, with ongoing meetings and events beginning back in November.   Fat Tuesday in New Orleans produces 20,000 pounds of waste from beads alone. They have been encouraging people to leave them behind in recent years so they can be recycled. 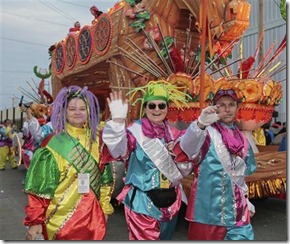 Check out some of the locations in Canada and abroad that celebrate:

Nice, France: Known as Carnival de Nice is held along the Riviera, this will be the 130th anniversary of this festival in Nice. Unique to this version of the celebration are the flowers in the spotlight. Those participating in the parade hand out flowers and numerous floats will be adorned with vibrant petals and sweet scents.

Venice, Italy: This time of year the masked ball takes over the city. Events include murder mystery tours, Venetian pub crawls, and theatrical grandeur. Numerous extravagant masked balls are held each year in St. Marks Square. And trying a famous frittelle, a traditional type of donut served in the city during Carnival there is a must.

Lucerne, Switzerland: Just like in St. Louis, the Lucerne Fasnacht focuses on the parades. Brass bands and boisterous drums stir up the city to open up the season. And as soon as the parade is over, trumpets and drummers peruse the streets to continue the fun and excitement for days. The fun stretches from the Tschäggättä Parade to celebrate Carnaval into the Lötschental Valley. 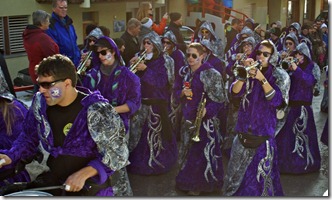 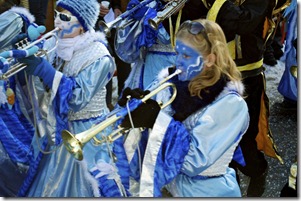 The Quebec Winter Carnival takes place in the Plains of Abraham, a historic area in the Battlefields Park area of Quebec City. The events include a winter amusement park, various winter sports competitions and displays, and there is a ‘magical’ castle for the carnival’s mascot, a huge snowman named Bonhomme. You can warm yourself up with a glass of hot caribou, a québécois mix of maple syrup, whiskey and red wine.

The Carnival of cultures in Berlin is quite recent, dating back to 1995, but what’s special about it is that it celebrates the ethnic diversity of the city. Every year, over one million participants flock to Kreuzberg to celebrate the multicultural richness of Berlin and the peaceful coexistence of different cultures in the city. The carnival lasts for four days, and in addition to concerts and performances it features exotic foods from around the world and craft fairs.

Köln (Cologne), Germany: The Kölner Karneval, Fasching or the “Fifth Season”, starts in November (the first guild meetings are held at 11:11 on the 11th day of the 11th month). The actual celebration starts 40 days before the beginning of Lent. Then Weiberfastnacht is kicked off on the Thursday before Ash Wednesday, where women (or men dressed as women) roam the streets and cut the ties off any unsuspecting men. And then to make up for the offense, she gives him an apologetic kiss. 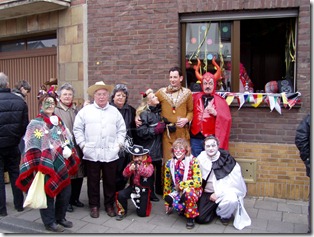 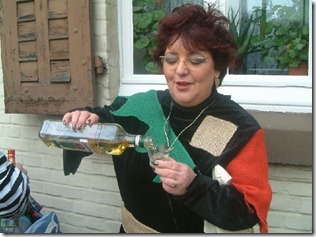 Since I have personally attended and taken part in Fasching or Karneval in Germany, I will focus on that here. It really was one of the greatest vacations I ever had… and thank God I was young. I have family who were active in the guilds so we got to attend the balls and parties and be in one of the parades. Mind you, it was 4 degrees below (-4) the day of the parade. But you just don’t notice the cold for all the schnapps and Jagermeister!  We slept about 9-hours total over 8-days, were semi-pickled most of the time and finally collapsed on Ash Wednesday.

Germans call the pre-Lenten Carnival season die närrische Saison (“the foolish season”) or die fünfte Jahreszeit (“the fifth season”). Except for Munich’s Oktoberfest, it is the one time of year when many normally staid Germans (and Austrians and Swiss) loosen up and go a little crazy. Fastnacht and Karneval in general is a “movable feast” (ein beweglicher Festtag) that depends on the date of Easter (Ostern).  (Faschingsdienstag). The official start of the Fasching season is either January 7 (the day after Ephiphany, Dreikönige) or the 11th day of the 11th month (Elfter im Elften, Nov. 11), depending on the region. That gives the Carnival guilds (Zünfte) three to four months to organize each year’s events (Carnival balls, parades, royalty, etc.) leading up to the big bash in the week before Ash Wednesday (Aschermittwoch), when the Lenten season (die Fastenzeit) begins.

Everyone gets into the act and even if you have to work or go to school during some of the time during the main week of Carnival, you are pretty much in a party state the whole week. Small shops and businesses often close and if not they decorate, serve goodies including libations and often dress-up. The schools decorate, have events and the kids also come in costume. There are whole guilds for children and even my uncle’s 80-year-old mother was pretty much MIA and partying the whole week until Ash Wednesday while we were there.

Everyone’s wish in the cold areas is to one time attend Mardi Gras in Brazil where it is warm and there is an opportunity for a wider array of costumes… or at least smaller costumes. It reminded me of playing in a bowl game here in the U.S. It is great to play in the Orange, Sugar, or Fiesta Bowls…. but no matter what the Rose Bowl is the Grand Daddy of them all and part of the attraction is the weather. So it is with the celebrations around the world, Rio is the Grand Daddy of them all, at least in everyone’s mind that I met. 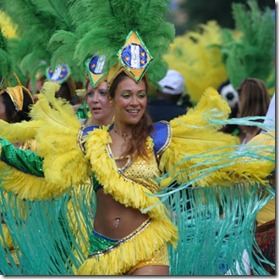 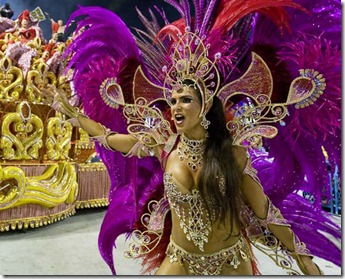 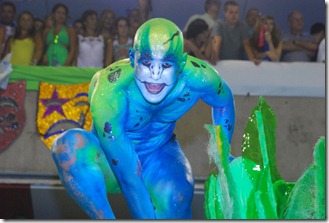 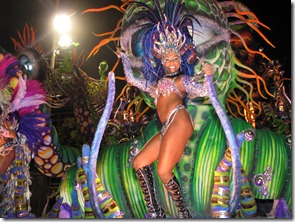 Below are a few old photos… from many years ago. I have family over there who were active in the Karnival groups and activities. My sister and I decided we would go in some truly American costumes so we went a cowgirl and Indian. Ah to be young again!! These photos are making me feel old(er). M~

Political Floats in Carnaval (Mardi Gras) Parade in Germany – No Political Correctness there!

I am a babyboomer and empty nester who savors every moment of my past and believes that it is the responsibility of each of us in my generation and Americans in general to make sure that America is as good or even a better place for future generations as it was for us. So far... we haven't done very well!! Favorite Quotes: "The first 50 years are to build and acquire; the second 50 are to leave your legacy"; "Do something that scares you every day!"; "The journey in between what you once were and who you are becoming is where the dance of life really takes place". At age 62 I find myself fighting inoperable uterine Cancer and thanks to the man upstairs and the prayers from so many people including many of my readers from AskMarion and JustOneMorePet... I'm beating it. After losing our business because of the economy and factors related to the re-election of President Obama in 2012 followed by 16-mos of job hunting, my architect-trained husband is working as a trucker and has only been home approximately 5-days a month since I was diagnosed, which has made everything more difficult and often lonely... plus funds are tight. Our family medical deductible is 12K per year for two of us; thank you ObamaCare. But thanks to donations from so many of you, we are making ends meet as I go through treatment while taking care of my father-in-law who is suffering from late stage Alzheimer's and my mother-in-law who suffers from RA and onset dementia as well as hearing loss, for which there are no caretaker funds, as I continue the fight here online to inform and help restore our amazing country. And finally I need to thank a core group of family, friends, and readers... all at a distance, who check in with me regularly. Plus, I must thank my furkids who have not left my side through this fight. You can see them at JustOneMorePet.
View all posts by Ask Marion →
This entry was posted in Events, Family and Friends, Fun, Fun and Happiness, Holidays, Photos and Pictures, Religion, Remembering, Stuff and Such, Tradition, Travel and tagged Ash Wednesday, Carnaval, Catholic Regions, Catholicism, costumes, Epiphany, Fasching, Freschen, Germany, Groetzmeier, holidays, Karnival, Karnivale, Köln, Lent, Mardi Gras, New Orleans, parades, Rio. Bookmark the permalink.