Rhymes With Right: Any doubt that we have a partisan hit on Rick Perry? Not only was the indictment based upon the complaint of a Soros-funded liberal activist group, but the grand jury was filled with partisan Democrats.

The Chronicle was able to identify nine of the 12 Travis County residents who served on the grand jury. Of those, five have voted only in Democratic Party primaries over the last 20 years, according to county records. One has voted in both Democratic and Republican primaries during that time, while three have not voted at all.

Having identified 3/4 of the grand jurors, you come up with only one who has EVER voted Republican — and even then the grand juror is not a consistent GOP primary voter? But you get five who have never voted in any other primary except the Democrat primary? Looks like the grand jury was stacked.

But surely they were fair-minded, right? After all, look at this from one of them.

Rhoda Chambers, who is the only person listed in Travis County with her name but would only confirm her service on a jury that ended last week, said grand juries involve careful consideration of facts.

“For me, it’s not a political decision,” Chambers said. “That’s what a grand jury is about – take the emotion out of it and look at the facts and make your best decision.”

Sounds very high minded, doesn’t it? Except while she was serving on the grand jury in question, she was involved in some other activity as well.

Rho Chalmers, who disclosed to the Houston Chronicle yesterday that she was a member of the grand jury that indicted Texas Gov. Rick Perry, was an active delegate to the Texas Democratic Party convention during grand jury proceedings. Chalmers’ active participation in Democratic state politics is important because she claimed yesterday to the Houston Chronicle that her decision to indict Perry, a Republican, was not based on politics.

“For me, it’s not a political decision,” Chalmers told the newspaper. “That’s what a grand jury is about – take the emotion out of it and look at the facts and make your best decision based on your life experience.”

More troubling, however, is the fact that Chalmers attended, photographed, and commented on an event with Democratic state Sen. Kirk Watson while grand jury proceedings were ongoing.

Watson was a witness in front of the grand jury. On June 27, 2014, Chalmers shared a photo of the Watson event on a community Facebook page she started called Developer’s Dungeon. “Senator Kirk Watson telling the story of the Wendy Davis fillibuster (sic),” she wrote in a comment accompanying the picture.

Frankly, this does not pass the smell test.

The indictment of a sitting governor for using his veto power is on its face a perverse violation of the separation of powers contained in the Texas Constitution. To allow a grand jury stacked with the governor’s political opponents is even less acceptable. The judge assigned to hear this case needs to dismiss the charges with prejudice — and if he does not, then the appellate court needs to do so in order to preserve the principle of separation of powers and that of not criminalizing what are disputes over politics and policy.

While serving on the grand jury charged with hearing no other case except one against the sitting governor involving a conflict with a public official of a different party, she was a delegate to that other party’s convention. Not only that, she served on the Rules Committee — a position that as a rule only goes to the most active of party activists. Not only that, she was having outside contact with witnesses testifying before the grand jury while it was sitting. Doesn’t this raise questions as to the impartiality of this grand juror? I would argue that it does — and that it also raises the question of she may have tainted the grand jury’s deliberations. 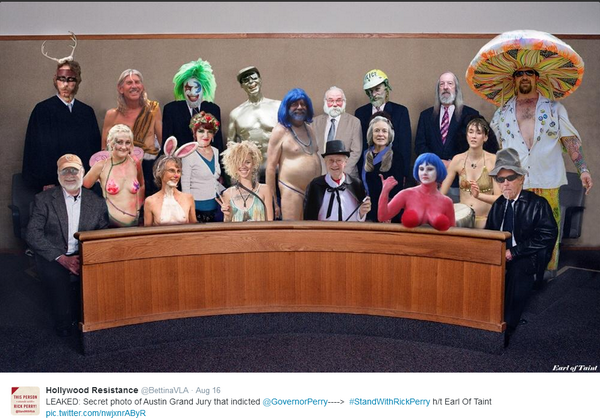 I am a babyboomer and empty nester who savors every moment of my past and believes that it is the responsibility of each of us in my generation and Americans in general to make sure that America is as good or even a better place for future generations as it was for us. So far... we haven't done very well!! Favorite Quotes: "The first 50 years are to build and acquire; the second 50 are to leave your legacy"; "Do something that scares you every day!"; "The journey in between what you once were and who you are becoming is where the dance of life really takes place". At age 62 I find myself fighting inoperable uterine Cancer and thanks to the man upstairs and the prayers from so many people including many of my readers from AskMarion and JustOneMorePet... I'm beating it. After losing our business because of the economy and factors related to the re-election of President Obama in 2012 followed by 16-mos of job hunting, my architect-trained husband is working as a trucker and has only been home approximately 5-days a month since I was diagnosed, which has made everything more difficult and often lonely... plus funds are tight. Our family medical deductible is 12K per year for two of us; thank you ObamaCare. But thanks to donations from so many of you, we are making ends meet as I go through treatment while taking care of my father-in-law who is suffering from late stage Alzheimer's and my mother-in-law who suffers from RA and onset dementia as well as hearing loss, for which there are no caretaker funds, as I continue the fight here online to inform and help restore our amazing country. And finally I need to thank a core group of family, friends, and readers... all at a distance, who check in with me regularly. Plus, I must thank my furkids who have not left my side through this fight. You can see them at JustOneMorePet.
View all posts by Ask Marion →
This entry was posted in News and politics, Photos and Pictures, Politics, Wake Up, Watch the Other Hand, You Be the Judge and tagged grand jury, Law, Rick Perry, Texas, Wake Up. Bookmark the permalink.