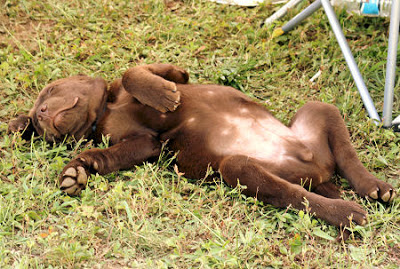 Ah, the sultry days leading up to the end of summer, when the warm weather brings out the torpor and laziness in all of us and little gets accomplished except by the determined and the desperate.

Of course, in this election season, that group would include the members of the political class and a veritable army of consultants, pollsters, advance men, hangers on, hired muscle, campaign workers, groupies, sycophants, body servants, soundmen, lighting directors, you name it. Just the thought of it reminds me of the old touring days, slogging down the highway to the next town….an unnatural way to live, but the common lot of political junkies, musicians, carnies and con men always on the way to the next gig, the next score….

The Romans were the first to label this time of year the Dog Days(diēs caniculārēs), noting that the skies were ruled by Sirius, the Dog Star, the brightest star in the night sky at this time of year. And Herodotus, Plutarch, Caesar and Thucydides all noted the effect this time of year has on men…the influence of the days of Dog Star giving rise to tempers, frustrations, gambles and many times, war and rumors of war. Some things never change. Or at least that’s what the smart money in Vegas, DC and other oracular venues where the entrails get read for omens says. The mood can get ugly very quickly.

This week’s contest is dedicated to letting sleeping dogs lie…at least for the moment.

Welcome to the Watcher’s Council, a blogging group consisting of some of the most incisive blogs in the ‘sphere, and the longest running group of its kind in existence. Every week we have nominations; each of the members nominate two posts each, one written by themselves and one written by someone from outside the group for consideration by the whole Council.Then we vote on the best two posts, with the results appearing on Friday morning.

The Council In Action!!

Tom White over at VA Right! is rapidly achieving guru status as a political expert in the Old Dominion. His latest mention was in a monthly Virginia Magazine, The Chesterfield Monthly.

This week, The MidKnight Review, Blazing Cat Fur, The Political Commenator and The Pirate’s Cove earned honorable mention status with some great articles.

To bring something to my attention, simply head over to Joshuapundit and post the title and a link to the piece you want considered along with an e-mail address (mandatory, but of course it won’t be published) in the comments section no later than Monday 6PM PST in order to be considered for our honorable mention category. Then return the favor by creating a post on your site linking to the Watcher’s Council contest for the week when it comes out on Wednesday morning

It’s a great way of exposing your best work to Watcher’s Council readers and Council members while grabbing the increased traffic and notoriety. And how good is that, eh?

So, let’s see what we have for you this week….

I am a babyboomer and empty nester who savors every moment of my past and believes that it is the responsibility of each of us in my generation and Americans in general to make sure that America is as good or even a better place for future generations as it was for us. So far... we haven't done very well!! Favorite Quotes: "The first 50 years are to build and acquire; the second 50 are to leave your legacy"; "Do something that scares you every day!"; "The journey in between what you once were and who you are becoming is where the dance of life really takes place". At age 62 I find myself fighting inoperable uterine Cancer and thanks to the man upstairs and the prayers from so many people including many of my readers from AskMarion and JustOneMorePet... I'm beating it. After losing our business because of the economy and factors related to the re-election of President Obama in 2012 followed by 16-mos of job hunting, my architect-trained husband is working as a trucker and has only been home approximately 5-days a month since I was diagnosed, which has made everything more difficult and often lonely... plus funds are tight. Our family medical deductible is 12K per year for two of us; thank you ObamaCare. But thanks to donations from so many of you, we are making ends meet as I go through treatment while taking care of my father-in-law who is suffering from late stage Alzheimer's and my mother-in-law who suffers from RA and onset dementia as well as hearing loss, for which there are no caretaker funds, as I continue the fight here online to inform and help restore our amazing country. And finally I need to thank a core group of family, friends, and readers... all at a distance, who check in with me regularly. Plus, I must thank my furkids who have not left my side through this fight. You can see them at JustOneMorePet.
View all posts by Ask Marion →
This entry was posted in Get Involved, Knowledge Is Power, manipulation of the public, News and politics, Politics, Wake Up, Watch the Other Hand and tagged alternative media, bloggers, blogosphere, Dog Days, Ebola, grandparents, knowledge, manipulation, Middle East, news, Obamaland, politics, summer, Watcher's Council. Bookmark the permalink.