MURRIETA – Demonstrators opposed to illegal immigration stood their ground again at the Murrieta Border Patrol station on Monday, where U.S. Border Patrol had been scheduled to transfer a third round of buses, with approximately 140 illegal aliens aboard in total, transferred from overcrowded Texas detention facilities.

For a third time, the buses were rerouted to the San Ysidro, California Border Patrol station, near the U.S.-Mexico border, for processing. The demonstrators gathered in areas to the north and south of the Murrieta station after law enforcement blocked off the road near the station itself. Many told Breitbart News they considered their stand a success, since buses scheduled for Murrieta are avoiding it as long as demonstrators remain.

The anti-illegal immigration protests Monday brought out new, first-time demonstrators and onlookers from many different backgrounds–from young enlisted Marines to legal immigrants from Germany, Mexico, and Central America. Karen Siegemund of Rage Against the Media, comedian and author Evan Sayet, and radio host Kender Macgowan made it out as well. 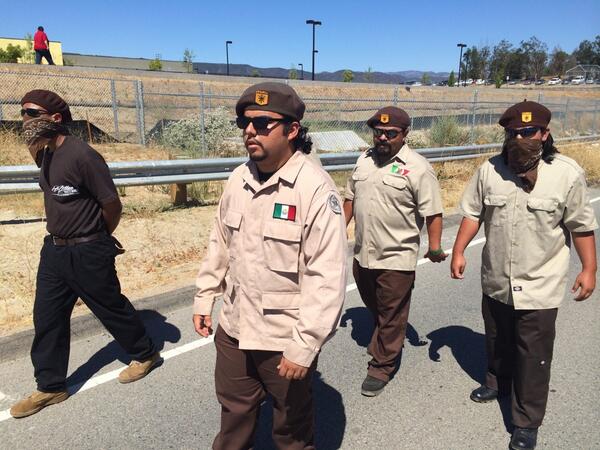 FireAndreaMitchell: La Raza or “The Race” which is a group of Hispanic Supremacy group has dispatched their brown beret thugs for when the buses arrive from San Diego and protesters try to block them. La Raza brown berets are ready to cause trouble the second they see something they don’t like. This could get really nasty.

These guys are from La Raza. They claim they are here to protect the children. #StandForMurrieta

I warned you years ago about “La Raza” I told you what they wanted. You are about to see it in action and in collusion with the fed gov.

Protesters in Murrieta, California, blocking and turning away buses of illegal immigrants

Cloward-Piven at Our Border…

Capsizing the Republic – Cloward and Piven on the Southern Border

Western Journalism: Dr. Ben Carson explained in an interview with World Net Daily that the nation’s founders intended that “our system of government and freedom is dependent on a well-informed and educated populace.”

He went on to say that “People who don’t have a good base of knowledge can be easily manipulated” by slick politicians and dishonest media.

Dr. Carson said that society is more interested in the amount of sugar in a soft-drink than the ever-growing laundry list of scandals in America. “When we’ve got IRS going on, and Benghazi going on, and NSA going on, and Fast and Furious going on, and a dozen other things going on, and we’re talking about a trademark for the Redskins.” See Video HERE

Why the White House Wants Amnesty

I am a babyboomer and empty nester who savors every moment of my past and believes that it is the responsibility of each of us in my generation and Americans in general to make sure that America is as good or even a better place for future generations as it was for us. So far... we haven't done very well!! Favorite Quotes: "The first 50 years are to build and acquire; the second 50 are to leave your legacy"; "Do something that scares you every day!"; "The journey in between what you once were and who you are becoming is where the dance of life really takes place". At age 62 I find myself fighting inoperable uterine Cancer and thanks to the man upstairs and the prayers from so many people including many of my readers from AskMarion and JustOneMorePet... I'm beating it. After losing our business because of the economy and factors related to the re-election of President Obama in 2012 followed by 16-mos of job hunting, my architect-trained husband is working as a trucker and has only been home approximately 5-days a month since I was diagnosed, which has made everything more difficult and often lonely... plus funds are tight. Our family medical deductible is 12K per year for two of us; thank you ObamaCare. But thanks to donations from so many of you, we are making ends meet as I go through treatment while taking care of my father-in-law who is suffering from late stage Alzheimer's and my mother-in-law who suffers from RA and onset dementia as well as hearing loss, for which there are no caretaker funds, as I continue the fight here online to inform and help restore our amazing country. And finally I need to thank a core group of family, friends, and readers... all at a distance, who check in with me regularly. Plus, I must thank my furkids who have not left my side through this fight. You can see them at JustOneMorePet.
View all posts by Ask Marion →
This entry was posted in Changing Winds, Economy and Money, Freedom, Get Involved, Health and wellness, Patriotism, Politics, Progressivism, Stand Up, Strength, Wake Up, Watch the Other Hand, You Be the Judge. Bookmark the permalink.