True the Vote: the citizens initiative pursuing “free and fair elections for all Americans,” and 13 other plaintiffs have filed a lawsuit in federal court against the Mississippi Secretary of State and the Republican Party of Mississippi over the June 24 primary election runoff in which Sen. Thad Cochran edged tea-party challenger Chris McDaniel.

The lawsuit asks the court to grant immediate access to voting records to inspect for possible illegal voting. It asserts that “defendants failed to properly abide by federal election record maintenance and open records provisions codified in the National Voter Registration Act of 1993 (NVRA). Records made partially available to the plaintiffs indicated ‘double-voting’ from Democratic to Republican primaries – potentially diluting votes in violation of the Equal Protection Clause.” 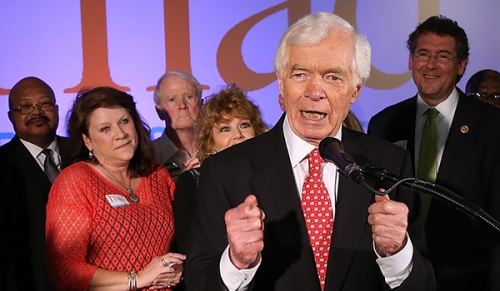 A lot has happened in the last 24 hours, more than I can keep up with, even after pulling an all-nighter!

****For starters, the McDaniel campaign has now identified (now up to 4,300+) illegal votes with only half of the counties canvased. It seems highly likely they may find enough invalidated votes to overturn the results of the election, especially if what has been said about absentee votes is true.

Of course, McDaniel doesn’t actually need to find enough illegal votes to overturn the election, to prevail here. You see, as backwards as Mississippi’s voting system seems to be, they actually have very strong laws against vote fraud, laws with teeth!

There’s an interesting concept here at play. By law, all Chris McDaniel has to do is provide enough evidence of fraud to taint the vote. In Mississippi the evidence of significant fraud can force a new election to be held. It would seem, that with 4,300 illegal votes so far, we may have met that threshold. Time will tell.

REPORT from credible source: Cochran is planning to resign if a special election is called.. #mssen

This is an interesting development. Resigning might just save Cochran from legal action, maybe. It also gives the Corrupt Republican Establishment™ a chance to appoint one of their cronies to fill-out the rest of Cochran’s unexpired term.

Now unless McDaniel is the one appointed to fill Cochran’s unexpired term [almost zero chance that will happen] whoever is appointed will not be able to run in November. The Republican candidate would be McDaniel. However, the Republicans could do a lot of damage to McDaniel. You know democrats would run ads claiming McDaniel is so undesirable that he was not appointed to Senate by the Governor.

If the source is correct, and Cochran is thinking of resigning, we pretty much know he’s guilty of everything alleged.

Catherine Engelbrecht, the brave Texas warrior from True The Vote who has been attacked viciously by the Obama regime, filed suit in federal court Tuesday against Mississippi’s Secretary of State Delbert Hosemann and the Mississippi Republican Party, asking a judge for an immediate injunction against them, so that the election material from the June 24 Republican primary runoff can be inspected.

Here’s a copy of the lawsuit for readers to look over: Scribd – http://www.scribd.com/embeds/232166906/content

If you missed Hannity Tuesday night:

The federal agency regulating and monitoring money in federal elections is seeking answers from a pro-Cochran Super PAC regarding what appears to be campaign finance violations.

The Federal Election Commission (FEC) has sent a Request For Additional Information (RFAI) to Mississippi Conservatives, a Super PAC supporting the re-election of Sen. Thad Cochran, R-Miss. The committee has until August 1st to respond, or the failure to do so “could result in an audit or enforcement action.”

The FEC also sought answers for an independent expenditure paid to Winning Edge that was reported on a 24-hour report, but was not correlated with the committee’s Schedule E for the 12-Day pre-runoff report covering 5/15 through 6/4.

Remember Pete Perry, the Hinds County GOP chairman, who democrat party officials say approached them for help illegally stealing the election for Thad Cochran, by not swapping voter rolls, as is customary to ensure there is no crossover, or double voting?

The Mississippi Democrat Party chairman said he knew about Cochran’s illegal vote buying scheme [“walkin’ around money,” in democrat party language]on June 18 and “didn’t like it.”

.@ChuckCJohnson On 6/18, Rickey Cole, Chairman, MS Dems was on L Ingraham’s radio show-he talked abt walking around $$. He didn’t like it

Our buddy Dan Riehl gets it:

Thanks to Haley Barbour the party of Lincoln designation is now an unworthy sham in MS.

There is much, much more going on, with breaking news by the minute!

If readers want to stay informed, I recommend following Charles C Johnson on Twitter. Charles has been the man behind all of the news coming out of Mississippi. It’s his hard work that has produced all of the evidence against the Cochran campaign, Haley Barbour, and so on. He’s a one man army!

I know money is tight in Obama’s America™, but if you have some spare change, send it Charles’ way. He’s been doing all this fantastic work, that is finally being picked up by the national news, on his own dime. When this is all over, and justice prevails, Charles will be one of the Patriots we will owe a huge debt of gratitude to. Show that gratitude now by sending a couple of bucks to Charles at his research funding site here.

I am a babyboomer and empty nester who savors every moment of my past and believes that it is the responsibility of each of us in my generation and Americans in general to make sure that America is as good or even a better place for future generations as it was for us. So far... we haven't done very well!! Favorite Quotes: "The first 50 years are to build and acquire; the second 50 are to leave your legacy"; "Do something that scares you every day!"; "The journey in between what you once were and who you are becoming is where the dance of life really takes place". At age 62 I find myself fighting inoperable uterine Cancer and thanks to the man upstairs and the prayers from so many people including many of my readers from AskMarion and JustOneMorePet... I'm beating it. After losing our business because of the economy and factors related to the re-election of President Obama in 2012 followed by 16-mos of job hunting, my architect-trained husband is working as a trucker and has only been home approximately 5-days a month since I was diagnosed, which has made everything more difficult and often lonely... plus funds are tight. Our family medical deductible is 12K per year for two of us; thank you ObamaCare. But thanks to donations from so many of you, we are making ends meet as I go through treatment while taking care of my father-in-law who is suffering from late stage Alzheimer's and my mother-in-law who suffers from RA and onset dementia as well as hearing loss, for which there are no caretaker funds, as I continue the fight here online to inform and help restore our amazing country. And finally I need to thank a core group of family, friends, and readers... all at a distance, who check in with me regularly. Plus, I must thank my furkids who have not left my side through this fight. You can see them at JustOneMorePet.
View all posts by Ask Marion →
This entry was posted in Elections, Get Involved, Knowledge Is Power, low-informed voters, manipulation of the public, News and politics, Politics, Stand Up, Wake Up, Watch the Other Hand and tagged 2014 Elections, Allen West, Chris McDaniel, Cochran, corruption, dirty politics, Election 2014, elections, Equal Protection Clause, FEC, fraud, Get-Invovled, GOP establishment, Hayley Barbour, Lawsuits, Lou Dobbs, low-informed voters, manipulation of the public, McCain, Mississippi, National Voter Registration Act, NVRA, politics, primaries, Rinos, Saving America, stand-up, stealing elections, tea party, voter fraud, Wake Up, WND. Bookmark the permalink.