By Isabel Matos  –  A Time For Choosing:

The vote count has been suspended until tomorrow. It looks like hand counts of ballots will be done in the counties where where ballots did not come in. It’s good to see how RINOS work. They’re doing everything they can to defeat McDaniel. A minimum of 50% plus one vote was needed to win the primary. Rinos will pull an Al Gore and drag this out to win if they have to. In that sense it is a victory for us. ~ Isabel

Race is too close to call.  What a huge victory tonight. This is the 1st time a sitting US Senator in MS failed to win 50% of the vote since 1942!! It looks like a runoff and we will need to repeat this effort. Our voters will be back…and they’re bringing friends. ~ Chris McDaniel

Thank you Iowa! I am humbled and honored to accept the Republican nomination for United States Senate. Now it’s time to beat President Obama’s choice, Bruce Braley, and get this seat back into our hands. The hard work begins now—let’s send Braley home!http://bit.ly/1m9ceOQ 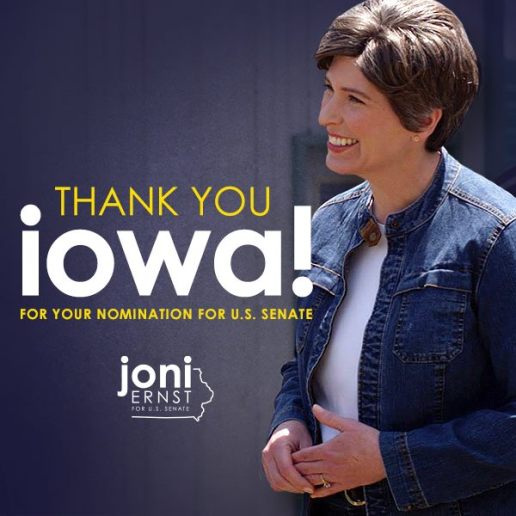 Jeff Sessions had an uncontested primary. Others races captured national attention: California’s for governor (Tim Donnelly 16% vs. Jerry Brown 51%), Steve Lonegan’s bid for New Jersey’s 3rd Congressional district (he was re-endorsed by Sarah Palin), and Dr. Annette Bosworth’s struggle to take on Mike Rounds and the status quo. She was new to politics but got in courageously.

The beginning and last days of her race made national headlines and generated a lot of interest and excitement but the hottest race is down in Mississippi where things got downright nasty in an epic battle between the establishment and the People, with Halley Barbour pulling out all the stops to help incumbent Thad Cochran defeat Chris McDaniel.  There was nothing charming about assassinating a good man’s character, using taxpayer money to fund inappropriate lifestyles (for years) and asking Democrats to support him as recently as a few days ago. We can only hope it is Thad Cochran’s last election. It seems too close to call but we wish the anti-establishment fighter the best in unseating Cochran, a really out of touch and arrogant Senator who didn’t really know what the tea party was all about. Mississippians will hopefully send a clear message that they are sick of politics as usual in Barbour’s neck of the woods and are ready for real change.

McDaniel will owe his victory to no Mississippi political dynasty or even his staff (which consensus among donors and organizers both in the state and of outside groups is in fact, that a poor staff has prevented this from being a 60/40 race in McDaniel’s favor). A victory for the McDaniel will be on the backs of average Mississippians hungry for bold conservative reforms. ~Ali.

(Candidate needs to receive 35% of the vote to avoid convention.)

Tea Party Candidate Tim Connelly (14.8%) gave Kashkari a good run on a shoestring budget with Kashkari putting millions of his own money into the campaign

How Many Votes Will Two Million Dollars Buy in California? GOP Gubernatorial Candidates to Find Out Tuesday

I am a babyboomer and empty nester who savors every moment of my past and believes that it is the responsibility of each of us in my generation and Americans in general to make sure that America is as good or even a better place for future generations as it was for us. So far... we haven't done very well!! Favorite Quotes: "The first 50 years are to build and acquire; the second 50 are to leave your legacy"; "Do something that scares you every day!"; "The journey in between what you once were and who you are becoming is where the dance of life really takes place". At age 62 I find myself fighting inoperable uterine Cancer and thanks to the man upstairs and the prayers from so many people including many of my readers from AskMarion and JustOneMorePet... I'm beating it. After losing our business because of the economy and factors related to the re-election of President Obama in 2012 followed by 16-mos of job hunting, my architect-trained husband is working as a trucker and has only been home approximately 5-days a month since I was diagnosed, which has made everything more difficult and often lonely... plus funds are tight. Our family medical deductible is 12K per year for two of us; thank you ObamaCare. But thanks to donations from so many of you, we are making ends meet as I go through treatment while taking care of my father-in-law who is suffering from late stage Alzheimer's and my mother-in-law who suffers from RA and onset dementia as well as hearing loss, for which there are no caretaker funds, as I continue the fight here online to inform and help restore our amazing country. And finally I need to thank a core group of family, friends, and readers... all at a distance, who check in with me regularly. Plus, I must thank my furkids who have not left my side through this fight. You can see them at JustOneMorePet.
View all posts by Ask Marion →
This entry was posted in Elections, Freedom, Get Involved, Knowledge Is Power and tagged 2014 Elections, Election 2014, elections, primaries. Bookmark the permalink.