The Rise of Thought Crimes and Racist Poker

Ben Shapiro says that it appears we are in an age where people care more about what you say than what you do. He used as an example of a gaming company, who today fired an employee for suggesting that Donald Sterling was a victim. The employee, Josh Olin, said this on Twitter:

When you were raised in an era where segregation was perceived as “right”, that will stick with some people. Doesn’t make him a monster.

Here’s an unpopular opinion: Donald Sterling has the right as an American to be an old bigot in the security of his own home. He’s a victim.

05.02.14 on #RedEye Greg welcomes guests @Sherrod_Small and @RAtheRuggedMan! Panel questioned the Oprah and partners play and motive to buy the Clippers… not the only ones who seem to be asking that question.  Sherrod Small and Rathe said people would generally tell someone like Sterling to leave those feelings and comments at home, which he did, and now he is being punished for expressing himself in his own home.

I’ve pretty much stayed away from the Donald Sterling story, mostly because with everything else going on, I see this as a deliberate distraction by the media.

But I don’t mind this brief reflection,because it relates to a great many other things.

Donald Sterling, who owns the Los Angeles Clippers basketball team made some private remarks to his girlfriend/mistress V. Stiviano, who is of black and Mexican descent, after she posted a picture of herself with Lakers Hall of Famer Magic Johnson on Instagram.

Sterling told Stiviano not to broadcast her association with black people or bring black people to Clippers games, and specifically mentioned Magic Johnson on the recording, saying “don’t bring him to my games, OK?”

Well! After this was outed on TMZ Saturday, that’s all anyone in the media had time to write or talk about.

The NBA’s black players voiced outrage, and the player’s union said that “this is a very serious issue which we will address aggressively.”

Rev Al Sharpton, of course, threatened to rally the troops for a protest outside this evening’s NBA playoff game in Los Angeles, and even the Mayor of Los Angeles, Eric Garcetti came out with a statement, saying “These statements are offensive and despicable and have no place in Los Angeles. I urge the NBA to act swiftly. L.A. fans deserve and demand better.”.

Well, the NBA did act swiftly. NBA Commissioner Adam Silver held a press conference today and announced that Sterling was going to be banned for life from the NBA and fined $2.5 million.

Silver said he was going to “do everything in my power” to force the sale of the Clippers.

“The hateful opinions voiced by that man are those of Mr. Sterling. The views expressed by Mr. Sterling are deeply offensive and harmful. That they came from an NBA owner only heightens the damage and my personal outrage,” Silver said. “I am banning Mr. Sterling for life from any association with the Clippers association or the NBA. Mr. Sterling may not attend any NBA games or practices, he may not be present at any Clippers facility, and he may not participate in any business or decisions involving the team.”

The irony of all this is that Sterling, a Democrat in good standing was all set to receive an award from the NAACP in spite of a long history of, shall we say,problems with racial discrimination, including allegations from former players. In November 2009, Sterling paid $2.73 million to settle allegations by the feds that he refused to rent apartments to Hispanics and blacks and to families with children. And the Bush Justice Department sued Sterling in August 2006 for allegations of housing discrimination in the Koreatown neighborhood in mid Los Angeles.

Nevertheless, none of this was a problem for the NAACP before, where’s there’s nothing money won’t buy. At least, until now.

So here we have an old white guy who essentially became a thought criminal not for any of his prior problems with race (which were no secret to anyone) but because he said some really stupid, bigoted things in private.

That’s your hand? Let me show you mine.

Today, when NBA Commissioner Silver announced Donald Sterling’s punishment, guess who was sitting in the front row? None other than our old friend Spike Lee (h/t, Truth Revolt).

Lee now works for SiriusXM NBA Radio, an official NBA outlet. Let’s examine some of Spike Lee’s record on race shall we? Just this last February, Lee was bitching on the air about too many white people living in Harlem:

“Have you seen Fort Greene Park in the morning? It’s like the mother*****’ Westminster Dog Show….When you see white mothers pushing their babies in strollers, three o’clock in the morning on 125th Street, that must tell you something.”

Anyone who’s seen his films has noticed that white characters – or in most cases caricatures- are universally portrayed as unsympathetic stereotypes, and in the case of ‘Mo’ better Blues’, fairly anti-semitic ones.

And it was Spike Lee, you’ll remember, that posted what he thought was the home address of George Zimmerman on Twitter..except it turned out to be a completely different elderly couple who received multiple death threats and had to flee for their lives from an angry mob. Spike had to give up some cash for that one, but someone could easily have been hurt or killed because he decided to throw gasoline on a raging fire.

Let’s further remember that all of this stuff was public, out in the open and not part of what was presumed to be a private conversation. Anyone calling for Spike Lee to be fired? For his show to be boycotted? Did the NBA have any problems hiring him, with his history? Not even remotely. In fact, he’s featured in their commercials.

Oh, and can we talk about Reverend Al? This racist and anti-semite blatantly libeled people just to get himself donations and notoriety in the Tawana Brawley case, instigated a pogrom against Jews in the mixed Brooklyn neighborhood of Crown Heights, called Jews ‘diamond merchants’ and ‘interlopers’, was arguably responsible for the deaths of four people in the Freddie’s Fashion Mart slayings, and spurred the mob and threatened riots over the Trayvon Martin shooting.

And now there he was, calling for  Donald Sterling to be stripped of his ownership of the Clippers, saying, “No one should be allowed to own a team if they have in fact engaged in this kind of racial language.”

‘Racial language’? Let’s listen to a few clips of Rev Al in action:

And the height of irony? In spite of admitting after the fact that he knew all about Donald Sterling’s prior problems with race, Rev Al was more than willing to headline the NAACP dinner that was scheduled to honor Sterling. 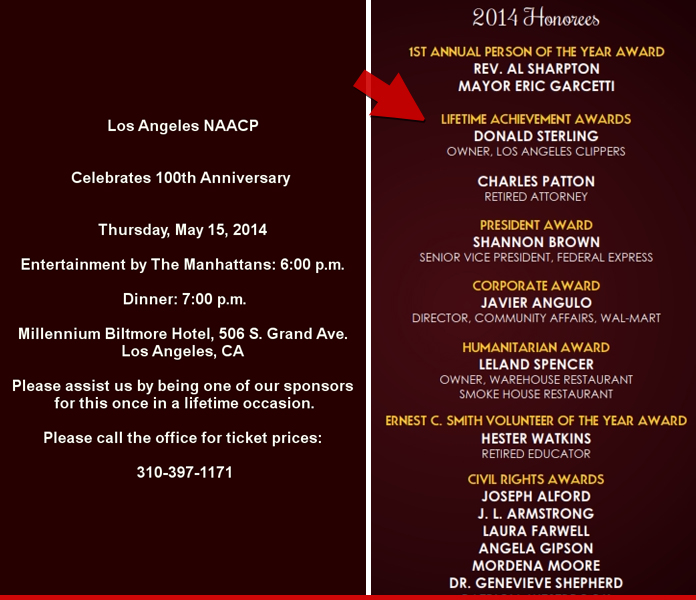 What does that say about Rev Al? We already know what it says about the NAACP. But is anyone talking about it? Has MSNBC fired him? Has he suddenly become persona non grata at the White House, the people’s house you and I pay for?

Racist poker? I think I have a much better hand, and I’ll raise you.

Let’s be clear here. I’m not engaging in the game of saying that what Donald Sterling did is just fine. In fact, on a purely practical note, any businessman who disrespects his paying customers and employees like this loses my respect, just because I don’t have much respect for sheer stupidity.

And the reason for that is pretty obvious. With the midterms approaching, and President Obama’s approval ratings sinking in the polls a distraction was needed, and ra-aaa-acism and class warfare is about all that’s left.

So what we have here is the punishment of a thought criminal, based on race and on partisan political necessity, and that shouldn’t sit well with anyone.

Even more so, it highlights a different standard for bigotry based on color. And if that’s not de facto racism in itself,what is?

I am a babyboomer and empty nester who savors every moment of my past and believes that it is the responsibility of each of us in my generation and Americans in general to make sure that America is as good or even a better place for future generations as it was for us. So far... we haven't done very well!! Favorite Quotes: "The first 50 years are to build and acquire; the second 50 are to leave your legacy"; "Do something that scares you every day!"; "The journey in between what you once were and who you are becoming is where the dance of life really takes place". At age 62 I find myself fighting inoperable uterine Cancer and thanks to the man upstairs and the prayers from so many people including many of my readers from AskMarion and JustOneMorePet... I'm beating it. After losing our business because of the economy and factors related to the re-election of President Obama in 2012 followed by 16-mos of job hunting, my architect-trained husband is working as a trucker and has only been home approximately 5-days a month since I was diagnosed, which has made everything more difficult and often lonely... plus funds are tight. Our family medical deductible is 12K per year for two of us; thank you ObamaCare. But thanks to donations from so many of you, we are making ends meet as I go through treatment while taking care of my father-in-law who is suffering from late stage Alzheimer's and my mother-in-law who suffers from RA and onset dementia as well as hearing loss, for which there are no caretaker funds, as I continue the fight here online to inform and help restore our amazing country. And finally I need to thank a core group of family, friends, and readers... all at a distance, who check in with me regularly. Plus, I must thank my furkids who have not left my side through this fight. You can see them at JustOneMorePet.
View all posts by Ask Marion →
This entry was posted in Uncategorized and tagged Al Sharpton, Ben Shapiro, conspiracies, Defacto Racism, Fox, freedom, Greg Gutfeld, hate speech, Megyn Kelly, Oprah, privacy, racism, Spike Lee, Thought Crimes. Bookmark the permalink.

3 Responses to The Rise of Thought Crimes and Racist Poker