On Monday’s “Special Report” on Fox News,  Charles Krauthammer called on Secretary of State John Kerry to resign for the obnoxious remarks he had made that were reported by Josh Rogin of The Daily Beast suggesting Israel could become “an apartheid state.”

“It’s beyond nonsense,” Krauthammer said. “It’s pernicious and extremely harmful. What the Secretary of State of the United States has succeeded in doing in what he thought was a private comment is to echo and therefore to legitimize the worst of the libelous claims against the Jewish state. If there is one minority in the Middle East that enjoys the rule of law and protection and democracy it is Arabs in Israel. One out of every five Israelis is a Palestinian, overwhelming they are Muslim. There are Arabs in the government, in the Supreme Court, in all walks of life, in the universities.”

“There’s actually affirmative action if you are a Palestinian in the universities,” he added. “And to compare that in any way with the systematic discrimination against black Africans in South Africa is truly appalling and hurtful. I think Cruz is right. This is beyond something requiring an apology. I think this is a resigning-type statement. This is an injury to an ally that will echo because it will be repeated, and people will saying, ‘I’m not saying this, it is the Secretary of State of the United States.’ It is untrue. It is pernicious and it’s truly sometng that demands at the very least an immediate apology.”

Terri Lynn Land is running for the US Senate in MI:

If remarks accurate, Cong Peters should join me in asking Sec Kerry to resign #MISEN

And Joni Ernst is running for the US Senate in Iowa:

Sec of State John Kerry must immediately resign due to incredibly inappropriate comments toward Israel, 1 of America’s most trusted allies.

Twitchy: ‘If I could rewind the tape’: John Kerry clarifies ‘apartheid’ remark:

“I want to see a two state solution that results in a secure Jewish state and a prosperous Palestinian state, and I’ve actually worked for it,” wrote Kerry. “I will not allow my commitment to Israel to be questioned by anyone, particularly for partisan, political purposes.” 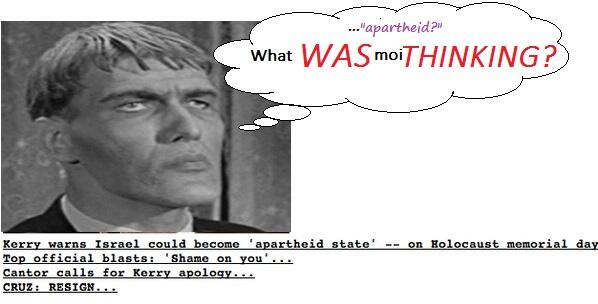 I am a babyboomer and empty nester who savors every moment of my past and believes that it is the responsibility of each of us in my generation and Americans in general to make sure that America is as good or even a better place for future generations as it was for us. So far... we haven't done very well!! Favorite Quotes: "The first 50 years are to build and acquire; the second 50 are to leave your legacy"; "Do something that scares you every day!"; "The journey in between what you once were and who you are becoming is where the dance of life really takes place". At age 62 I find myself fighting inoperable uterine Cancer and thanks to the man upstairs and the prayers from so many people including many of my readers from AskMarion and JustOneMorePet... I'm beating it. After losing our business because of the economy and factors related to the re-election of President Obama in 2012 followed by 16-mos of job hunting, my architect-trained husband is working as a trucker and has only been home approximately 5-days a month since I was diagnosed, which has made everything more difficult and often lonely... plus funds are tight. Our family medical deductible is 12K per year for two of us; thank you ObamaCare. But thanks to donations from so many of you, we are making ends meet as I go through treatment while taking care of my father-in-law who is suffering from late stage Alzheimer's and my mother-in-law who suffers from RA and onset dementia as well as hearing loss, for which there are no caretaker funds, as I continue the fight here online to inform and help restore our amazing country. And finally I need to thank a core group of family, friends, and readers... all at a distance, who check in with me regularly. Plus, I must thank my furkids who have not left my side through this fight. You can see them at JustOneMorePet.
View all posts by Ask Marion →
This entry was posted in Uncategorized and tagged apartheid, Bret Baier, Charles Krauhammer, Fox, incompetance, Israel, John Kerry, Middle East, Obamaland, Palestine, politics, Resignation, State Department, Ted Cruz. Bookmark the permalink.