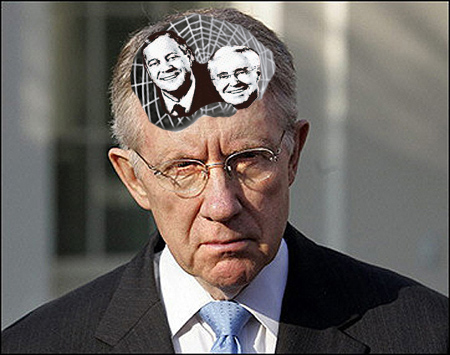 “For the last few days, you’ve heard it, you’ve heard it, and you’ve heard it. I’m going to repeat it today. In America, a man who works the same job a woman has makes more money than she does. It takes a woman until today every year to make up for what she lost last year,” Reid said.

“So my Republican colleagues, I guess, think that pay gap doesn’t matter that much since I had not a single person come to the floor — well, we’ve had a couple. One of them came and said it was a bill for trial lawyers,” he continued. “But basically they do nothing but stand in the background and filibuster. I get it. Two Congresses ago, they did it last Congress, and they’re doing it this Congress, filibustering our moving to this important piece of legislation.”

Reid spoke of the Paycheck Fairness Act, which comes to the floor Wednesday with heavy opposition from Republicans.

“These really rich, rich, rich, rich, rich people like the Koch brothers, they prefer to go along with women being paid less than men. And like so many things here, the Republicans in the Senate go along with what the Koch brothers want,” he said. “This issue boils down a fundamental question: Whose side are you on? As usual, the Republicans are siding with the rich and not obviously being too concerned about what’s happening with women in America, not getting paid as much as men for doing the exact same work.”

Reid was asked if he’s going to get to the minimum wage bill, seeking a hike to $10.10, before the end of the week.

“I don’t think so. I have a lot of other things I’m going to do,” he said. “I want to put lots of nominations we’re going to move on, as early as probably today. So we’ll have to have a ton of votes before the week is done.”

Then the majority leader was asked by another reporter if he’s “been successful in explaining to America who they are.”

“Well, I haven’t been successful enough, because I’m going to continue. But I do feel good about this, no one knew who the Koch brothers were until we started this little deal here. And now about half the people in America know who they are,” Reid declared. “By the time we finish this, everyone is going to know who these — the two richest brothers in the world are.”

Of course,I didn’t yet know this was a family matter as I began exploring that line item on Reid’s FEC report. Nor did I know that reporters from national media outlets also were chasing the story. Like many of them, I had other things on my docket and thought the FEC inquiry was interesting but not imperative.

When I called Reid’s office to ask about it, I got a standard peremptory response: “The campaign complied with all FEC rules.”

I asked why the senator would have used campaign funds to buy holiday gifts, and remembered a 2006 controversy over his using campaign funds to give his Ritz-Carlton doorman Christmas presents. Reid, whose net worth may be as much as $6.3 million, eventually reimbursed the campaign, but this new inquiry suggested he hadn’t learned his lesson—a nice gift to his enemies.

“The report is accurate. The expenditure was for holiday gifts,” a Reid spokeswoman told me. And when I asked who Ryan Elisabeth was, she said simply: “jewelry, knick knacks.”

I then Googled “Ryan Elisabeth” and almost immediately found a LinkedIn page for Ryan Elizabeth Reid, who describes herself as a “performing arts professional” from Brooklyn. The photo shows a young woman in an artistic-looking white hat with purple feather, her head tilted at a jaunty angle.

I asked Reid’s office what the relation was. Then I waited. And waited.

For an entire day, Reid’s office failed to confirm that Ryan Elisabeth was his granddaughter, offering up banalities about her being “just a jewelry vendor” or simply being dismissive. It was uncharacteristic—and suspicious.

A spokeswoman finally admitted the relationship the next day—another Reid operative apparently already had done so with national reporters, suggesting his office had no coordinated response—and said the gifts were purchased for supporters and donors. Then I realized there was another “Ryan Elisabeth” line item that brought the total to nearly $17,000.

“This is the third time in a month that the Fact Checker has given Four Pinocchios to an ad sponsored by Senate Majority PAC. That’s a pretty dreadful track record, and does little for the organization’s credibility”

The National Republican Senatorial Committee will send a letter to 34Louisiana network affiliates Thursday requesting that an attack ad produced by the pro-Democratic Senate Majority PAC be pulled from television, and threatening legal action if it isn’t.

The letter, penned by NRSC general counsel Megan Sowards, charges that the ad is “patently false.”

“Since the Senate Majority PAC advertisement contains false and misleading statements, we hereby demand that your station stop airing this advertisement immediately,” the letter reads. “If you are unwilling to do so, we reserve the right to pursue any appropriate legal action and request an explanation of the basis of your decision in law or station policy.”

The ad, part of a recent $3 million blitz by Senate Majority PAC in Louisiana and North Carolina, attempts to tie Republican Rep. Bill Cassidy to Charles and David Koch, the wealthy brothers whose pro-Republican group, Americans for Prosperity, has so far spent more than $30 million attacking Democrats in key Senate battleground states, including Louisiana.

Gateway Pundit: Ron Fournier: “Democrats Are Going to Pay a High Price for Lying” in Their Senate Ads (Video)

I am a babyboomer and empty nester who savors every moment of my past and believes that it is the responsibility of each of us in my generation and Americans in general to make sure that America is as good or even a better place for future generations as it was for us. So far... we haven't done very well!! Favorite Quotes: "The first 50 years are to build and acquire; the second 50 are to leave your legacy"; "Do something that scares you every day!"; "The journey in between what you once were and who you are becoming is where the dance of life really takes place". At age 62 I find myself fighting inoperable uterine Cancer and thanks to the man upstairs and the prayers from so many people including many of my readers from AskMarion and JustOneMorePet... I'm beating it. After losing our business because of the economy and factors related to the re-election of President Obama in 2012 followed by 16-mos of job hunting, my architect-trained husband is working as a trucker and has only been home approximately 5-days a month since I was diagnosed, which has made everything more difficult and often lonely... plus funds are tight. Our family medical deductible is 12K per year for two of us; thank you ObamaCare. But thanks to donations from so many of you, we are making ends meet as I go through treatment while taking care of my father-in-law who is suffering from late stage Alzheimer's and my mother-in-law who suffers from RA and onset dementia as well as hearing loss, for which there are no caretaker funds, as I continue the fight here online to inform and help restore our amazing country. And finally I need to thank a core group of family, friends, and readers... all at a distance, who check in with me regularly. Plus, I must thank my furkids who have not left my side through this fight. You can see them at JustOneMorePet.
View all posts by Ask Marion →
This entry was posted in Asshats, Get Involved, History, Knowledge Is Power, Lies, manipulation of the public, News and politics, Politics, Progressivism, Wake Up, Watch the Other Hand and tagged elections, Harry Reid, knowledge, Koch, Koch Brothers, Liar, lies, Nevada, Obcessions, Pinocchios, politics, Progressives, Reid, Senate, Wake Up. Bookmark the permalink.