Events of the Week… are in large part a continuation of the past two weeks Russia-Ukraine Still Escalating and U.S. News Coverage is Still Obsessed with the Missing Malaysian Plane?!? A diversion?  And if so… from what? The Republicans in the House are gearing up to attempt to support the Ukraine and to present an alternative to ObamaCare  And the Obama woman… Michelle, grandma Marian Robinson and the first daughters seem to be terrorizing China…

Sarah Palin Predicted Russia Invading the Ukraine If Obama Got Elected… and Democrats and skeptics including former DNC chairman Howard Dean and Noam Chomsky have apologized to her while Millennials and Independents are taking notice and taking a good look at Palin as the possible answer to Hillary the Democrats’ 2016 carrot of ‘electing the first female president’ of the U.S.

Democrats and the liberal media love to mock conservatives like Sarah Palin as unintelligent or uninformed, but the worm has turned and history has proven Sarah Palin right over and over again. Do your homework and then help us spread this important message and fuel a conservative resurgence in 2014…  As Palin said in 2013 CPAC Speech, “We are not here to re-brand a party… We are here to rebuild a country!” 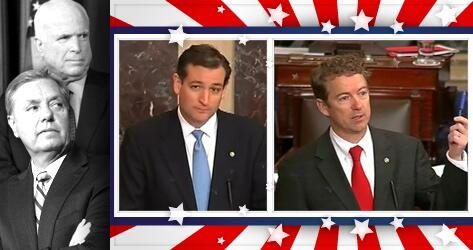 But the key for the GOP to take the presidency in 2016 is Sarah Palin.  Sarah Palin matched with up with Ted Cruz, Rand Paul, Allen West, Ben Carson or one of several others is a clear choice of ideologies, the GOP’s toughest match-up against Hillary as well as addressing what will be the Dem’s carrot of electing the first female U.S. President.

Love and Prayer are the Best Medicines!

In a disarmed society, the streets are ruled by the physically strongest and morally weakest individuals. – Will Spencer

Book(s) of the Week – Not Cool: The Hipster Elite and Their War on You followby Greg Gutfeld host of Redeye and co-host of the Five on Fox Cable News.

Behind every awful, dangerous decision lurks one evil beast: the Cool.

Video: ‘Not Cool’ by Greg Gutfeld

From politics to the personal, from fashion to food, from the campus to the locker room, the desire to be cool has infected  all aspects of our lives. At its most harmless, it is annoying. At its worst, it is deadly, on a massive scale.  The Cool are the termites of life, infiltrating every nook and cranny and destroying it from within. The Cool report the news, write the scripts, teach our children, run our government—and each day they pass judgment on those who don’t worship at the altar of their coolness.  The cool fawn over terrorists, mock the military, and denigrate employers. They are, in short, awful people.

From what we wear and what we eat, to what we smoke and who we poke, pop culture is crafted and manipulated by the cool and, to Greg Gutfeld, that’s Not Cool.

How do you vanquish the cool and discover your own true self? Read this book.

In Not Cool, Greg Gutfeld, bestselling author of The Joy Of Hate and The Bible of Unspeakable Truths, lays out the battle plan for reclaiming the real American ideal of cool–building businesses, protecting freedom at home and abroad, taking responsibility for your actions, and leaving other people alone to live as they damn well please.  Not Cool fights back against the culture of phonies, elitists, and creeps who want your soul. It’s not a book, it’s a weapon—and one should be armed with it at all times.

I am a babyboomer and empty nester who savors every moment of my past and believes that it is the responsibility of each of us in my generation and Americans in general to make sure that America is as good or even a better place for future generations as it was for us. So far... we haven't done very well!! Favorite Quotes: "The first 50 years are to build and acquire; the second 50 are to leave your legacy"; "Do something that scares you every day!"; "The journey in between what you once were and who you are becoming is where the dance of life really takes place". At age 62 I find myself fighting inoperable uterine Cancer and thanks to the man upstairs and the prayers from so many people including many of my readers from AskMarion and JustOneMorePet... I'm beating it. After losing our business because of the economy and factors related to the re-election of President Obama in 2012 followed by 16-mos of job hunting, my architect-trained husband is working as a trucker and has only been home approximately 5-days a month since I was diagnosed, which has made everything more difficult and often lonely... plus funds are tight. Our family medical deductible is 12K per year for two of us; thank you ObamaCare. But thanks to donations from so many of you, we are making ends meet as I go through treatment while taking care of my father-in-law who is suffering from late stage Alzheimer's and my mother-in-law who suffers from RA and onset dementia as well as hearing loss, for which there are no caretaker funds, as I continue the fight here online to inform and help restore our amazing country. And finally I need to thank a core group of family, friends, and readers... all at a distance, who check in with me regularly. Plus, I must thank my furkids who have not left my side through this fight. You can see them at JustOneMorePet.
View all posts by Ask Marion →
This entry was posted in Communication, Get Involved, Health and wellness, Knowledge Is Power, News and politics, Pets, Politics, Thoughts ..., Wake Up, Watch the Other Hand and tagged animals, Blogger, choices, Get Involved, health, healthcare, knowledge, news, Palin, Palin-Cruz, Pets, politics, TheWrap, Thoughts. Bookmark the permalink.