Quote of the Week: Chris Wallace to Dan Pfeiffer: So…”If Things Are So Great, How Come They’re So Lousy?”

David John Marotta, a Wall Street adviser and President of Marotta Wealth Management, puts U.S. unemployment closer to 37.2%, much higher than even the 25% most bloggers and honest journalists have estimated, and certainly not the unicorn dust propaganda of 6.7% claimed by the Fed.

The Persecution of Conservatives in Hollywood 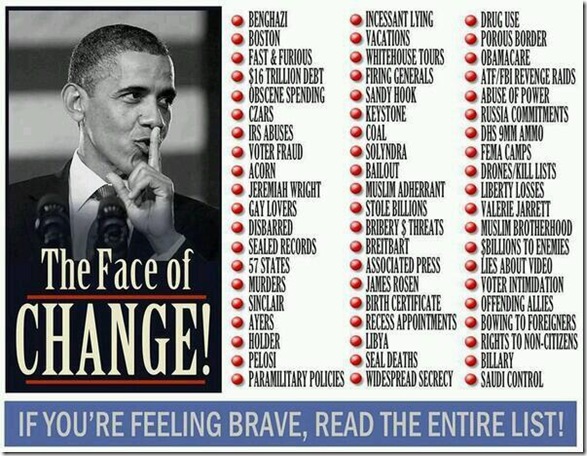 Book of the Week – Upheaval (Kindle) by Lou Dobbs

IF YOU DREAM OF A BETTER TOMORROW FOR AMERICA, FIRST FACE THE REALITIES OF TODAY.

Expanding on his candid “Chalk Talks” that inform the popular Lou Dobbs Tonight, the outspoken journalist points us toward the path to a revived America by forcing us to face facts: our nation has lost its moorings.

We are alienated from political parties that have ignored the middle class, and we are rightfully outraged when General Electric, the world’s third-largest multinational conglomerate, pays zero corporate taxes while the average American struggles.

We live in an era of bipartisan dysfunction, and of cronyism that would make 19th-century robber barons blush. Our business leaders are failing because CEOs know how tightly their success is linked to political contributions.

We can’t talk honestly about America’s enemies without fear of reprimand from the ACLU. Political correctness is shackling our common sense.
We reelected a president who presided over one of the worst economies in history, set our foreign policy adrift, and expressed contempt for the foundations of our free-enterprise system.

We have lost the values that once defined “the American way”—thrift, faith, efficiency, community, ingenuity—and have given in to big business, an insatiable government ruling class, and accept our trillion-dollar debt as the new normal.

And we are kept in the dark, thanks to the media that scarcely cover the issues that may not sell to a profitable demographic.

So what’s the good news? Every one of these problems is fixable, and can be addressed right now. In Upheaval, Lou Dobbs explains how to start thinking clearly again, how to engage in issues that matter, how to win arguments based on ideas and knowledge (knowledge really is power), and how to make a difference that’s imperative to our survival. Upheaval arms readers with this information for fighting back, and does it as only Lou Dobbs can: with a style as frank and intelligent as it is witty and unfailingly honest.

And another must read is: Collusion: How the Media Stole the 2012 Election—and How to Stop Them from Doing It in 2016 (Kindle)

Hillary Clinton and Chris Christie – Oh, how the mighty may fall – WRIGHT 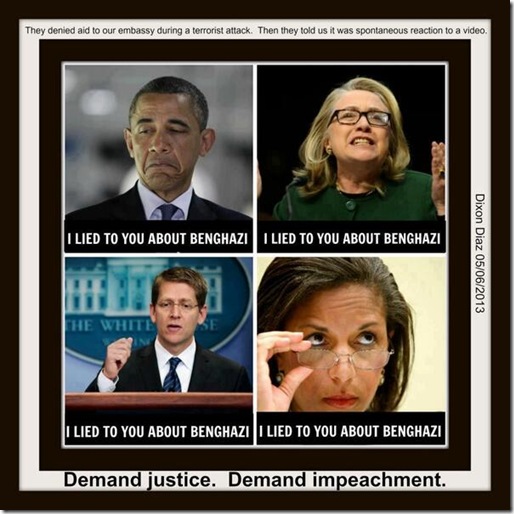 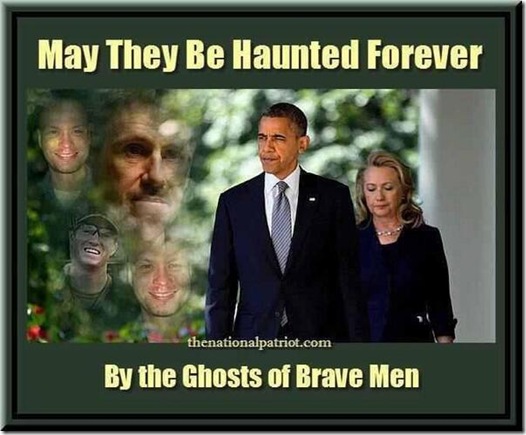 Updated 1.27.14: Hillary now wants to get Benghazi out of the way… Clinton said when asked to identify “do-overs” of her time as America’s top diplomat during her keynote appearance before the National Automobile Dealers Association in New Orleans. she said, “My biggest, you know, regret is what happened in Benghazi,”  I think what Hillary meant was that her biggest regret is not being able to squelch the Benghazi scandal.  Just for the sake of history, let’s recall that Clinton could have prevented the attack but failed to do so

Benghazi Report: Obama and Hillary Lied, Americans Died, Media Complicit… Obama Went to Vegas and they need to take responsibility!  Yet, RNC Chairman Says Hillary 2016 Candidacy is Set… And Female Presidency Will be the Carrot… Time to say no thanks and fight back with our own powerhouse!!

In the meantime, there are rumblings that there has been a shake-up in the White House because Obama Puppetmaster, George Soros, is not happy; perhaps coming off the meetings by the power elite in Davos?  And the Democrats facing re-election in 2014 are also running scared.

Obama has already warned that he will use his phone and pen to sign executive orders to circumvent Congress and the witch hunt against Conservative Opponents and anyone the White House considers to be in their way will be investigated, minimalized and silenced.  David Plouffe is said to be out, Valerie Jarrett has been demoted and replaced by John Podesta and David Simas will run Obama’s new operations office.  The State of the Union is expected to be anything but a call for unity, and 2014 definitely will be the most divisive Obama year yet as Soros pushes his agenda to move the U.S. toward Socialism. It is time for everyone to get-involved and for Conservatives, Libertarians, Tea Party Groups and all the other small groups who are fighting to take back our Country to find common ground and work together to save America for our children, our grandchildren and future generations.  There is too much at stake not to!!

The real question is… will we, Conservatives, Libertarians, Tea Party Groups and all the other patriotic groups, continue letting the media and RINOs and Progressives from both parties steal elections from us? because we can’t or won’t find common ground and compromise?

We are living in amazing times, good and bad, the kind of times that truly try men’s (and women’s) souls and that make or break countries and shape (or reshape) societies. Please get involved, pray for guidance, prepare for the worst (for yourself and to help others), then educate yourself and share what you learn with as many people as you can. All our futures depend on it!!

Be sure to come visit us here at Ask Marion regularly and subscribe to receive the latest posts first… as well as visit: Just One More Pet, True Health Is True Wealth!!, Knowledge Is Power, and the Daily Thought Pad.

Stop the Pain… Get-Involved and Speak Up Whenever You Suspect Abuse, Of Any Kind

Something to make the Babyboomers Smile…

Video: Paul McCartney and Ringo Starr To Come Together at the Grammy Awards 2014

McCartney and Ringo performing together was definitely one of the highlights of the Grammy show, and there were several others, but there were also plenty of low-lights including both overt and subtle attacks on Conservatism and Christianity. And Beyonce and Jay Z’s racy Vegas-style performance was certainly not appropriate for an 8:30p.m. time slot, not to mention Katy Perry’s performance which included pole dancing and a salute the occult all in one act.

I am a babyboomer and empty nester who savors every moment of my past and believes that it is the responsibility of each of us in my generation and Americans in general to make sure that America is as good or even a better place for future generations as it was for us. So far... we haven't done very well!! Favorite Quotes: "The first 50 years are to build and acquire; the second 50 are to leave your legacy"; "Do something that scares you every day!"; "The journey in between what you once were and who you are becoming is where the dance of life really takes place". At age 62 I find myself fighting inoperable uterine Cancer and thanks to the man upstairs and the prayers from so many people including many of my readers from AskMarion and JustOneMorePet... I'm beating it. After losing our business because of the economy and factors related to the re-election of President Obama in 2012 followed by 16-mos of job hunting, my architect-trained husband is working as a trucker and has only been home approximately 5-days a month since I was diagnosed, which has made everything more difficult and often lonely... plus funds are tight. Our family medical deductible is 12K per year for two of us; thank you ObamaCare. But thanks to donations from so many of you, we are making ends meet as I go through treatment while taking care of my father-in-law who is suffering from late stage Alzheimer's and my mother-in-law who suffers from RA and onset dementia as well as hearing loss, for which there are no caretaker funds, as I continue the fight here online to inform and help restore our amazing country. And finally I need to thank a core group of family, friends, and readers... all at a distance, who check in with me regularly. Plus, I must thank my furkids who have not left my side through this fight. You can see them at JustOneMorePet.
View all posts by Ask Marion →
This entry was posted in Big Brother, Changing Winds, Choices, Communication, Conservatives, Constitution, Elections, Entertainment, Get Involved, History, Knowledge Is Power, low-informed voters, manipulation of the public, Media, Music, News and politics, Patriotism, Politics, Progressivism, Stand Up, Wake Up, Watch the Other Hand. Bookmark the permalink.