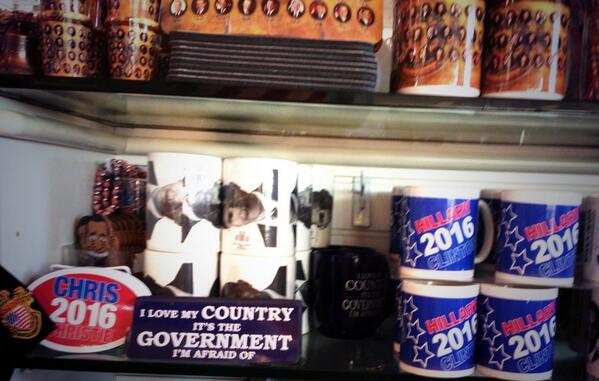 The establishment politicians from both parties and their media minions are already bombarding the public with the notion that the presidential candidates for 2016 are all but locked in and to avoid anymore future problems, which means keep ‘them’ and the status quo in place, you need to vote for incumbents or beltway types… for after all if Americans actually thought for themselves, did their homework and voted for people willing to fight for them… tea party, independent and grassroots candidates, there might actually be some real change and we could get our country back.  Even Fox News is promoting the Hillary-Christie match-up.

It is time for all of us to get involved, to educate ourselves and then share what we have learned and know, plus stop letting the bias media with an agenda tell us that the 2016 election is already all sewn up!

Except for the Kool-Aid drinking Progressives and those low-informed voters who follow the mainstream media (MSM) telling them that Hillary Clinton is “the candidate”, Hillay is a major “NO” choice for many due to her part in the Benghazi scandal and cover-up alone, plus if you don’t like ObamaCare, you’d hate HillaryCare.  Besides, Hillary is Obama in a dress with much of the same baggage and more, same allegiances, and even some of the same mentors.  We certainly don’t need 4 or 8 more years of Obama or any Progressive and that is why Biden is also a big “NO”. Plus, of course, Biden’s uncontrolled mouth disease certainly makes him less than President worthy. Progressivism is killing America, at least the America most people want to live in. But considering that the Democrat Party has been co-opted by the Progressives there won’t be any other choices from that side.

As for the GOP, America needs a real choice… not another moderate, Progressive light, or RINO candidate!  Just take a look at the last two elections with the GOP establishment picked presidential candidates McCain and Romney.  It is they who don’t and cannot win, not someone who would offer a choice, because the Republican base as well as many Independents stay home when they don’t see anyone who would represent them or that represents enough of a difference to make it worth their while to come out to vote. So Chris Christie, Jeb Bush and Paul Ryan in that order are NO’s for the right.

It is time that the GOP realizes that Americans want and deserve a clear choice. Unfortunately the RNC has re-elected Reince Priebus who does not think out of the box and is an establishment Republican, as their Chairman.  A third party candidate would just guarantee another Progressive Democrat win, which would be the final nail in the coffin of freedom. Yet the choke hold of the GOP Establishment on the Republican party is pushing its base and many independents in that direction, which would spell disaster for all of us.

The best and really only option for the GOP is a Tea Party type candidate and there are some good choices: Sarah Palin, Ted Cruz, Rand Paul, Allen West, Ben Carson… to name just a few. And considering that electing the first female president, like electing the first black president was in in 2008, will be the carrot, it would be smart of everyone to take a good hard look at the truth and positives about Sarah Palin, not what the MSM has been feeding us.  But the Progressive liberal media has done such a good job in their manipulation and selective reporting that when you say Tea Party or mention one of these lovers of freedom, the Constitution, and fiscal responsibility, just the mention of their names make many uninformed Americans shutter yet they really don’t even know why.  Many people don’t even realize that Tea Party stands for TAXED ENOUGH ALREADY and they don’t know much more about the aforementioned possible candidate choices, who would fight for all Americans’ freedoms instead of lining their own pockets or throwing in with the power elite establishment, either.

But not all the experts believe that the establishment candidates are a slam dunk.

Pat Caddell, a former adviser to President Jimmy Carter and a Fox News political analyst, said there will be a wave of “Mr. and Mrs. Smith”

candidates who get elected running against the permanent political class and career politicians.

Appearing on Sirius XM Patriot channel 125’s The Wilkow Majority with guest host and Breitbart News Executive Chairman Stephen K. Bannon Thursday, Caddell said there are two “alternate universes” – one in Washington in which the ruling class tries to tell the country what is important, and another in the rest of the country in which people “distrust” Washington.

Caddell said the Republican establishment often does not challenge the Obama administration on issues like the IRS’s targeting of Tea Party groups because it also wants to preserve the status quo and not disrupt it.

He said the only thing that the permanent political class cares about is “self-perpetuating” itself, and he emphasized that the “established order has a massive amount of resources to crush dissent.”

Yet, Caddell said the grassroots have been pushing back against the establishment’s institutional advantages, and Washington’s entrenched politicians sense something powerful is brewing outside of the Washington. He said the members of the permanent political class, even though they can’t quite put their fingers on it, sense that there is a wave forming against them.

He said a Republican who won a recent special election to Congress from Louisiana after being endorsed by a Duck Dynasty cast member was the “canary in the coal mine” for the establishment, and that is why the mainstream press and the permanent political class have not focused on the anti-Washington message Vance McAllister used to trounce his opponent.

Caddell said the party that best captures that spirit will have the advantage in upcoming elections.

And Sarah Palin, a possible and worthy contender herself if we really wake-up, said in her New Year’s message on Fox News, “The eyes of the nation are really opening up!”

Plus Charles Krauthammer has said more than once that Hillary has a rocky road ahead before securing the Democrat nomination.

So don’t be propagandized and manipulated again… If there ever were a couple elections to get involved in, it is the next two!

It All Hinges on Kentucky and Defeating Mitch McConnell

Why Chris Christie will never be President

I am a babyboomer and empty nester who savors every moment of my past and believes that it is the responsibility of each of us in my generation and Americans in general to make sure that America is as good or even a better place for future generations as it was for us. So far... we haven't done very well!! Favorite Quotes: "The first 50 years are to build and acquire; the second 50 are to leave your legacy"; "Do something that scares you every day!"; "The journey in between what you once were and who you are becoming is where the dance of life really takes place". At age 62 I find myself fighting inoperable uterine Cancer and thanks to the man upstairs and the prayers from so many people including many of my readers from AskMarion and JustOneMorePet... I'm beating it. After losing our business because of the economy and factors related to the re-election of President Obama in 2012 followed by 16-mos of job hunting, my architect-trained husband is working as a trucker and has only been home approximately 5-days a month since I was diagnosed, which has made everything more difficult and often lonely... plus funds are tight. Our family medical deductible is 12K per year for two of us; thank you ObamaCare. But thanks to donations from so many of you, we are making ends meet as I go through treatment while taking care of my father-in-law who is suffering from late stage Alzheimer's and my mother-in-law who suffers from RA and onset dementia as well as hearing loss, for which there are no caretaker funds, as I continue the fight here online to inform and help restore our amazing country. And finally I need to thank a core group of family, friends, and readers... all at a distance, who check in with me regularly. Plus, I must thank my furkids who have not left my side through this fight. You can see them at JustOneMorePet.
View all posts by Ask Marion →
This entry was posted in Americana, Choices, Common Sense, Conservatives, Economy and Money, Elections, Freedom, Get Involved, Health and wellness, Knowledge Is Power, manipulation of the public, Media, Politics, Progressivism, Stand Up, Thoughts ..., Wake Up, Wisdom, You Be the Judge. Bookmark the permalink.