The House Passed the Ryan-Murray Budget, 332-94

It’s war! Senate gears up for epic battle as ZERO Republicans line up to support budget agreement (and Democrats need to find at least five)

The Council has spoken, the votes have been cast and the results are in for this week’s Watcher’s Council match-up.

“The evil that men do lives after them; the good is oft interred with their bones.” – Shakespeare, “Julius Caesar”

“By the skillful and sustained use of propaganda, one can make a people see even heaven as hell or an extremely wretched life as paradise.” – Adolf Hitler on media

“What difference does it make?” – Hillary Rodham Clinton, Benghazi hearings

Former South African leader Nelson Mandela has passed away at the age of 95, from complications resulting from a lung infection.

Since he was essentially a secular saint, the hagiographies, the emotional tributes and the kicky sound bites will be in abundance. His place in history is assured, because like other secular saints, burning incense and making offerings at his altar is seen to confer virtue on the worshiper, especially if they’re white.

Nelson Mandela was an important figure in contemporary history, no doubt. But who was Nelson Mandela really? What did he accomplish? What is his legacy?

That’s a more complicated and nuanced story that you’re unlikely to hear about much in the medias frenzy over the next week or so. Because it doesn’t quite fit the script for a secular saint. And the complexity can be imagined when you learn that Mandela was the proud recipient of both the U.S. Medal of Freedom awarded to him by President Obama and the Order of Lenin, given to him by the Soviet Union, hardly a bastion of freedom or even simple human decency.

Certainly, he looked and sounded like a secular saint. A member of a family of Xhosa royalty, his tall, dignified bearing and his measured speech could almost have been cooked up by a Hollywood casting agent.

Nelson Mandela was born in Mvezo, a small village in the eastern part of South Africa’s cape province. Coming from a prominent family , he received excellent schooling in South Africa’s best schools so he could work as a councilor for the the Xhosa’s Thembu royal house. He later attended University of Fort Hare, an elite black institution in Alice, Eastern Cape. There he first got his political indoctrination in anti-colonialism and his introduction to Marxism. Traveling to Johannesburg in 1941, he first ran into the African National Congress in the person of Walter Sisulu, then a member of the fledgling African National Congress (ANC) and the Communist Party of South Africa (CPSA). In Johannesburg, Mandela was taken under the wing of Lazar Sidelsky, a Left wing Jewish lawyer sympathetic to the ANC and a partner in the law firm of Witkin, Sidelsky and Eidelman, who gave Nelson Mandela a job as a law clerk.

In those days,the ANC was essentially a non-violent social justice movement that lobbied for black rights and engaged in local politics. However, like many similar organizations in the West, it had been targeted by the Soviet Comintern and was already infiltrated by members of the CPSA as well as by actual Soviet agents.

While the evidence is mixed over whether Nelson Mandela ever joined the communist party, he frequently attended their meetings, and many of his closest associates, like Lionel ‘Rusty’ Bernstein, Joe Slovo, the long-time leader of the CPSA, his wife Ruth First, Gaur Redebe, Walter Sisulu and Nat Bregman definitely were, and some of them might have been actual Soviet agents. All of them were under ‘party discipline just as American communists were, which meant that their marching orders came directly from the Comintern and the Kremlin, no deviations allowed. Many members of CPSA became part of the ANC and the CPSA is still a part of the ANC’s political coalition today. Mandela’s openly expressed admiration and later friendship for communist dictators, his views on nationalization of South Africa’s major industries and government redistribution of wealth and his subsequently receiving the Order of Lenin from the Soviets shows that at best, he was a communist sympathizer.

After South Africa’s 1948 general election, the Afrikaner-led Herenigde Nasionale Party took power, uniting with the Afrikaner Party to form the National Party. They implemented the system of racial segregation known as apartheid. Mandela and his supporters were able to depose the existing ANC President Alfred Bitini Xuma at that time, who favored non-violence in seeking black civil rights and was an open anti-Communist. As Mandela wrote later in his memoirs, “We had now guided the ANC to a more radical and revolutionary path.”

In 1955, Mandela finally went fully over to the idea of using terrorism as as a political tool, or as he put it, the ANC “had no alternative to armed and violent resistance. ” In this, he was greatly influenced by his open admiration of the tactics of Mao Tse Tung and Fidel Castro.

In fact, the first ‘revolutionary’ act of Mandela’s was to send communist party apparatchnik and ANC member Walter Sisulu to the People’s Republic of China to obtain weapons. The PRC turned Mandela down, officially because they felt the ANC was not prepared for Mao-style guerilla warfare, but perhaps more likely because they were already deeply involved in arming and training the Viet Minh in their attempt to overthrow the Diem government in South Vietnam and similar operations with groups like the Pathet Lao elsewhere in South East Asia. They also likely underestimated Mandela and the ANC’s ability to win a war where resupply would be so difficult and no communist-controlled havens were nearby.

However, Mandela and the ANC began to collect whatever weapons and explosives they could get hold of and prepare for armed struggle on their own,while continuing to work on political agitation against the apartheid regime.

It was at this time that Mandela, inspired by Castro’s guerilla groups like 26th of July Movement and the Viet Minh founded his own terrorist elite, Umkhonto we Sizwe (“Spear of the Nation”, abbreviated as MK) with communists Walter Sisulu and Joe Slovo. The MK made their debut with 57 bombings on Dingane’s Day (16 December) 1961, followed by further attacks on New Year’s Eve.MK killed civilians and military alike, and two of their more famous operations were the Church Street bombing and the Magoo’s Bar bombing, both of which targeted civilians and were designed for maximum carnage..

The MK and an ANC group run by Mandela’s wife Winnie called the “Mandela United Football Club” were also responsible for the murder, torture and kidnapping of both whites and black political opponents and their families who opposed ‘armed struggle’. Much of this came out through Mandela’s own Truth and Reconciliation Commission, which investigated crimes committed under apartheid by both the government and the ANC. The 1998 findings of that investigation were suppressed by President Mandela.

Winnie Mandela is credited with introducing the practice of using necklacing (see video), forcing a gas or oil soaked tire over the head and shoulders to pin the arms of the victim and then lighting it on fire.Her quote? “With our matches and our necklaces we will liberate this country.” She has never served a day in jail, and still sits on the ANC executive committee. 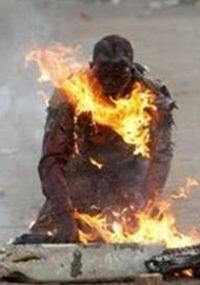 Bob Simon says Mandela was a “normal human being?” Since I, too, want to be normal, will have to brush up on “Necklacing.”

In our non-Council category, the winner was The Babalu blog with Gone is Fidel’s greatest admirer, submitted by Joshuapundit. It’s a Cuban blogger’s view of Nelson Mandela and his love affair with Fidel Castor that is must reading.

See you next week! Don’t forget to tune in on Monday AM for this week’s Watcher’s Forum, as the Council and their invited special guests take apart one of the provocative issues of the day with short takes and weigh in… don’t you dare miss it. And don’t forget to like us on Facebook and follow us on Twitter… ’cause we’re cool like that!

I am a babyboomer and empty nester who savors every moment of my past and believes that it is the responsibility of each of us in my generation and Americans in general to make sure that America is as good or even a better place for future generations as it was for us. So far... we haven't done very well!! Favorite Quotes: "The first 50 years are to build and acquire; the second 50 are to leave your legacy"; "Do something that scares you every day!"; "The journey in between what you once were and who you are becoming is where the dance of life really takes place". At age 62 I find myself fighting inoperable uterine Cancer and thanks to the man upstairs and the prayers from so many people including many of my readers from AskMarion and JustOneMorePet... I'm beating it. After losing our business because of the economy and factors related to the re-election of President Obama in 2012 followed by 16-mos of job hunting, my architect-trained husband is working as a trucker and has only been home approximately 5-days a month since I was diagnosed, which has made everything more difficult and often lonely... plus funds are tight. Our family medical deductible is 12K per year for two of us; thank you ObamaCare. But thanks to donations from so many of you, we are making ends meet as I go through treatment while taking care of my father-in-law who is suffering from late stage Alzheimer's and my mother-in-law who suffers from RA and onset dementia as well as hearing loss, for which there are no caretaker funds, as I continue the fight here online to inform and help restore our amazing country. And finally I need to thank a core group of family, friends, and readers... all at a distance, who check in with me regularly. Plus, I must thank my furkids who have not left my side through this fight. You can see them at JustOneMorePet.
View all posts by Ask Marion →
This entry was posted in Americana, Communication, Economy and Money, Freedom, Get Involved, Knowledge Is Power, Military, News and politics, Patriotism, Politics, Religion and Faith, Wake Up, Watch the Other Hand, You Be the Judge and tagged Allen West, alternative media, ANC, bloggers, blogosphere, budget, Caesar, collection of articles, CPSA, Hillary, History, Hitler, knowledge, Mandela, Middle East, military, necklacing, news, news nuggets, Palin, politics, Progressives, Quotes, religion, Sarah Palin, Socialism, survival, taxation, terrorism, Wtcher's Council. Bookmark the permalink.