Christians have allowed the true meaning of Christmas to be lost and co-opted. One of the greatest things you can do each year is to take part in or attend a Christmas or Live Nativity Pageant that focuses on the true story of Christmas and then to make that meaning the focus of your holiday. Gifts, decorations, parties, caroling and all the rest are great as long as we take time to focus on the true purpose for the celebrations.  We have allowed ourselves as a society to forget “the reason for the season”, this season and holiday as well as many others thereby lose their significance and the value of what should be special moments and meaningful celebrations in our lives.

Some of my greatest memories of Christmas involve going to mass on Christmas Eve as a child with my family and then participating in the Glory of Christmas (and Easter) for over 10-years as a family, with my husband and daughter, at the Crystal Cathedral… which after 30-years is sadly now dark. A true loss!!

Unfortunately the Crystal Cathedral Ministries only ever filmed this pageant once, early on: Experience the Miracle, the Glory of Christmas in the Crystal Cathedral, 1993 and restricted photos and filming of any kind, so we are blessed to have the photos above of our experience, and below are a few homemade videos I found.  What a blessing it was being part of that program and watching our daughter flying for Him as one of the angels. But truly one of the best parts was standing out back after each performance to greet; seeing how these performances touched peoples’ hearts, who came from all over the world to see them.

Video: What Can I Give Him? sung by 10 year old Isabelle Plazola

Some holidays like Christmas actually become part of the fabric of a nation, which was true of Christmas in America until we allowed political correctness to wag the dog… let the 15% tell 85% what they can and cannot do. And as Ben Stein has written more than once… he, a Jew, looks forward to the bejeweled trees, Christmas carols and an overall kinder season.

Rabbi Daniel Lapin (who founded the American Alliance of Christians and Jews) said on Glenn Beck’s Post-Thanksgiving Review Program: “Although I am Jewish and do not celebrate Christmas I respect the traditions and the holiday and I like the holiday for two good reasons: It helps the economy and it makes people better…” (95% of the money spent at Christmastime is for others… rather than for ourselves).

Lapin has spoken against the secularization of Christmas, saying that “We see obsequious regard for faiths like Judaism and even Islam, while Christianity is treated with contempt”. He is opposed to replacing the “Merry Christmas” greeting with “Happy Holidays”, saying instead “Let us all go out of our way to wish our many wonderful Christian friends a very Merry Christmas… Nationwide, Christmas Nativity scenes are banned from city halls and shopping malls but Hanukkah menorahs are permitted. There is without a doubt a war on Christmas as well as on patriotism.

“Blessed is the season which engages the whole world in a conspiracy of love!” …Hamilton Wright Mabie

LOS ANGELES (AP) – Damon Vix didn’t have to go to court to push Christmas out of the city of Santa Monica. He just joined the festivities.

The atheist’s anti-God message alongside a life-sized nativity display in a park overlooking the beach ignited a debate that burned brighter than any Christmas candle.

Santa Monica officials snuffed the city’s holiday tradition this year rather than referee the religious rumble, prompting churches that have set up a 14-scene Christian diorama for decades to sue over freedom of speech violations. Their attorney will ask a federal judge Monday to resurrect the depiction of Jesus’ birth, while the city aims to eject the case.

“It’s a sad, sad commentary on the attitudes of the day that a nearly 60-year-old Christmas tradition is now having to hunt for a home, something like our savior had to hunt for a place to be born because the world was not interested,” said Hunter Jameson, head of the nonprofit Santa Monica Nativity Scene Committee that is suing.  Read Full Story HERE  But Christians Found ‘Creative’ Loophole in Atheist-Inspired Santa Monica Nativity Ban & Secure Permit for ‘Live’ Display

Nativity on Wheels! PA Community Battles Atheist Complaints With Display of Jesus’ Birth on Platform in Front of City Hall

Secularists battling against nativities is nothing new, but 2012 has brought some major victories for atheists. Consider Santa Monica, California, where a 60-year nativity tradition has been banned; other communities have backed down over fears that Christian themes will be legally challenged by groups like the Freedom From Religion Foundation (FFRF) as well.  Yet NewsWeek and Jon Stewart Decreed the War on Christmas is Over…

But — believers are getting smart and fighting back with some creative methods of navigating around church versus state disagreements.

In 2013 the attacks have been on teachers putting Christmas cards up on their classroom doors, restrictions on Christmas music and both types and numbers of Christmas vs Secular songs at Christmas programs and the old Holiday tree verses Christmas tree verbiage for the public tree lighting ceremonies.

NJ Mayor Insists on Christmas Trees, Not ‘Holiday Trees,’ In His Town

TheBlaze already told you about the Santa Monica work-around: Christians will stage a live nativity, as only unattended displays were banned from the Palisades Park. Now, a community in Pittsburgh, Pennsylvania, has found it’s own solution to a potential atheist-led lawsuit against a display in front of a local municipal building.  Read Full Story and See Video HERE

And wow, see these photos below, from outside the U.S. Supreme Court. Brings back more memories of being part of the Glory of Christmas and Glory of Easter pageants for the Crystal Cathedral for me.

Fox News’ Shannon Bream is on the scene as faith organizations stage a live Nativity scene outside the U.S. Supreme Court in Washington, D.C.

This scene, sponsored by Faith and Action as well as The Christian Defense Coalition is part of “The Nativity Project.” The project seeks, in part, to bring attention to the hostility with which faith in the public square is met.

On Twitter, the camel is a hit. And, yes, that’s a real camel at the Supreme Ct.

Wow, these photos below, from outside the U.S. Supreme Court, bring back great memories of being part of the Glory of Christmas and Glory of Easter pageants for the Crystal Cathedral as a family.

A full on Nativity scene outside SCOTUS 2012 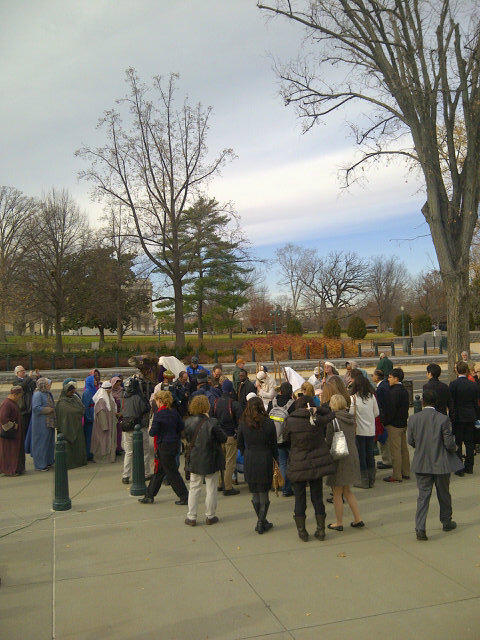 And for those that love the live animals in the nativities and pageants… check this out:  Animal Nativity

How Should Christians Respond to Atheist ‘Hatred’ & the War on Christmas? This Priest Has Some Advice

I am a babyboomer and empty nester who savors every moment of my past and believes that it is the responsibility of each of us in my generation and Americans in general to make sure that America is as good or even a better place for future generations as it was for us. So far... we haven't done very well!! Favorite Quotes: "The first 50 years are to build and acquire; the second 50 are to leave your legacy"; "Do something that scares you every day!"; "The journey in between what you once were and who you are becoming is where the dance of life really takes place". At age 62 I find myself fighting inoperable uterine Cancer and thanks to the man upstairs and the prayers from so many people including many of my readers from AskMarion and JustOneMorePet... I'm beating it. After losing our business because of the economy and factors related to the re-election of President Obama in 2012 followed by 16-mos of job hunting, my architect-trained husband is working as a trucker and has only been home approximately 5-days a month since I was diagnosed, which has made everything more difficult and often lonely... plus funds are tight. Our family medical deductible is 12K per year for two of us; thank you ObamaCare. But thanks to donations from so many of you, we are making ends meet as I go through treatment while taking care of my father-in-law who is suffering from late stage Alzheimer's and my mother-in-law who suffers from RA and onset dementia as well as hearing loss, for which there are no caretaker funds, as I continue the fight here online to inform and help restore our amazing country. And finally I need to thank a core group of family, friends, and readers... all at a distance, who check in with me regularly. Plus, I must thank my furkids who have not left my side through this fight. You can see them at JustOneMorePet.
View all posts by Ask Marion →
This entry was posted in Books, Choices, Constitution, Family and Friends, Freedom, Holidays, Joy, Knowledge Is Power, Patriotism, Politics, Religion and Faith, Spirituality, Tradition, We Are All God's Creatures, You Be the Judge and tagged American Traditions, American values, animal nativity, atheists, Bill of Rights, Charity, Christmas, Christmas pageants, Crystal Cathedral, Freedom of Religion, Glory of Christmas, God, Hanukah, holidays, Jesus, living nativities, Nativity, Nativity Project, nativity scene, SCOTUS, secularists, Spirit of Christmas, The Christian Defense Coalition, The War on… The War on Christmas, war on Christianity, War on Christmas, War on Religion, WoC. Bookmark the permalink.