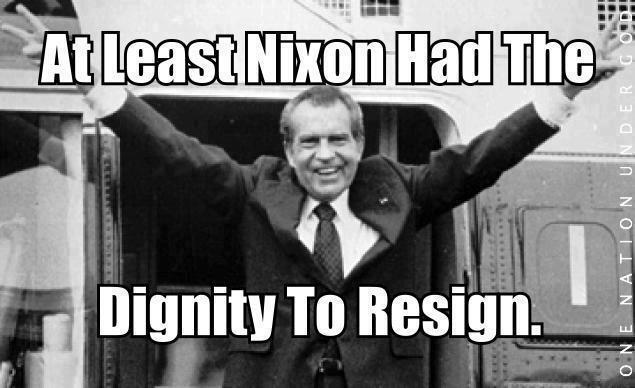 Whether you believe Nixon should have resigned or whether you think his offenses were pretty minor when compared to a lot of what has gone on in Washington since he resigned… the fact is he knew when it was time to leave an put the Country before his himself and his legacy!  The rest is a discussion for another time or a judgment for history…

WND: WASHINGTON – A retired Army general is calling for the “forced resignations” of President Obama, other administration officials and the leadership of Congress for the direction they’re taking the nation, his list of grievances including the systematic political purge of hundreds of senior military officers in the U.S. military.

Retired Maj. Gen. Paul E. Vallely told WND he is calling for nationwide rallies and protests to demand the resignations and added that a peaceful “civil uprising is still not out of question.”

Vallely, formerly the deputy commanding general of Pacific Command, said the current crop of leaders must be forced to resign by the “demand resignation” process, which he explained requires massive grass-roots protests and social networking. As an example, he cited the public and media pressure that led to the resignation of President Richard Nixon.

Impeachment, Vallely said, is not a viable option because of “partisan politics.”

“Our federal government continues down the path of destroying America,” he said. “Americans must now stand up and put America back on the right track.”

In issuing his national call to action, Vallely said the federal government has not subsided in “sucking the oxygen” out of America.

“And we call to action all branches of government to do your constitutional duties and not be led astray in the cultural and moral decay of America. We have witnessed far too many lies,” he said, as well as “deception and the corruption of the republic.”

Vallely reminds Americans that the Declaration of Independence itself states that whenever “any Form of Government becomes destructive to these ends, it is the Right of the People to alter or to abolish it, and to institute new Government, laying its foundation on such principles and organizing its powers in such form, as to them shall seem more likely to affect their Safety and Happiness.”

Vallely said the nation he long defended is self-destructing “before our very eyes,” because of “our inept and incompetent leadership in Washington.”

“The battle is on,” he added, “and we shall not retreat.”

Vallely, who has also served as a Fox News military analyst, claimed the Obama administration and leadership of Congress have been leading the nation down a road of “progressive socialism.”

The retired general said the U.S. faces a battle that is unknown to generations of Americans, and that the fate of the nation is “now in our hands” to enforce the Constitution and “severely limit the federal government and its out-of-control spending.”

He said conditions today are approaching those of the time of the inaugural address of President Abraham Lincoln, who said at the time that people have a “right to rise up and shake off the existing government and form a new one.”

“Shake off,” said Vallely, “means replacing government leaders.” He argued America today bears “many similarities to the fall of Rome.” America, he added, is not immune to collapse or even revolution, which he notes “has happened many times in history. … External and internal threats could precipitate this as well as any financial collapse.”

Vallely added that “politics as usual will not be effective or sufficient enough to turn the country around.”

Americans have had enough, he said, and the Obama White House and identifiable members of Congress “must now depart from a progressive socialist and treasonous death march and bankrupting the country beyond expectations.”

“A civil uprising is still not out of the question as ‘pain’ grips the country more each day,” Vallely said, adding that there is time to change the country in a peaceful way.

“This means raising your voice now to your neighbors, family, co-workers and friends,” he said. “Be the captains of your souls. I pray for another George Washington to appear within the year and lead us.”

One of the issues that alarms Vallely is the high number of senior officers in the U.S. military who have been fired under the Obama administration, a toll estimated at one officer per week. Indeed, Vallely has been very outspoken to what he calls a “purge” of the U.S. military by the Obama administration — with a stunning nine generals and flag officers relieved of duty this year alone. They are thinning the military herd by purging officers who disagree with them.

WND has been reporting on the surge of firings, suspensions and dismissals, for which Vallely has assigned a good portion of the blame to Obama’s close adviser, Iranian Born Valerie Jarrett. Rampant “political correctness” due to her influence, Vallely tells WND, is now permeating the military and negatively affecting everyone from top generals to the ranks of the enlisted.

Many would say that Valerie Jarrett is the power beyond the throne, “Rasputin” to some on Capitol Hill, the de-facto president according to others, and the worst presidential adviser ever, who serves as Obama’s ego-protector in the White House (see Ed Klein’s The Amateur/Kindle) She is also deeply involved in Obama/Kerry’s recent Iran Deal.

According to Vallely, Obama is “intentionally weakening and gutting our military, Pentagon and reducing the U.S. as a superpower, and anyone in the ranks who disagrees or speaks out is being purged.”

Vallely equated the current treatment of U.S. senior military officers watching over what is said and done among mid-level officers and enlisted ranks to that of the “political commissars from the Communist era.” (see Paul Kengor’s The Communist/Kindle)

He also told WND that the White House won’t investigate its own officials, but finds it easy to fire military commanders “who have given their lives for their country.”

“Obama will not purge a civilian or political appointee because they have bought into Obama’s ideology,” Vallely said. “The White House protects their own. That’s why they stalled on the investigation into Fast and Furious, Benghazi and Obamacare. He’s intentionally weakening and gutting our military, Pentagon and reducing us as a superpower, and anyone in the ranks who disagrees or speaks out is being purged.”

He’s far from alone in his concerns about the military purge, as J.D. Gordon, a retired Navy commander and a former Pentagon spokesman in the Office of the Secretary of Defense, says the Obama administration is rushing to unload senior officers whom he believes have become “political pawns” dismissed for questionable reasons.

Retired Army Maj. Gen. Patrick Brady, a recipient of the U.S. military’s highest decoration, the Medal of Honor, similarly has told WND that Obama needs to apply the same standards to his political appointees as he does to the military.

“Just when you thought the leadership of this government could not get any worse, it does,” Brady said. “Never in history has an administration spawned another scandal to cover the current one.”

This was a reference to the recent firing of a number of generals to mask “Obama’s serial scandals, all prefaced by lies – Fast and Furious, Benghazi, NSA, IRS,” among others, said Brady, former president of the Congressional Medal of Honor Society.

Retired Army Lt. Gen. William G. “Jerry” Boykin, who was a founding member of Delta Force and later deputy undersecretary of defense for intelligence under President George W. Bush, tells WND it is worrying that four-star generals are being retired at the rate that has occurred under Obama.

“Over the past three years, it is unprecedented for the number of four-star generals to be relieved of duty, and not necessarily relieved for cause,” Boykin said. “I believe there is a purging of the military. The problem is worse than we have ever seen.”

I am a babyboomer and empty nester who savors every moment of my past and believes that it is the responsibility of each of us in my generation and Americans in general to make sure that America is as good or even a better place for future generations as it was for us. So far... we haven't done very well!! Favorite Quotes: "The first 50 years are to build and acquire; the second 50 are to leave your legacy"; "Do something that scares you every day!"; "The journey in between what you once were and who you are becoming is where the dance of life really takes place". At age 62 I find myself fighting inoperable uterine Cancer and thanks to the man upstairs and the prayers from so many people including many of my readers from AskMarion and JustOneMorePet... I'm beating it. After losing our business because of the economy and factors related to the re-election of President Obama in 2012 followed by 16-mos of job hunting, my architect-trained husband is working as a trucker and has only been home approximately 5-days a month since I was diagnosed, which has made everything more difficult and often lonely... plus funds are tight. Our family medical deductible is 12K per year for two of us; thank you ObamaCare. But thanks to donations from so many of you, we are making ends meet as I go through treatment while taking care of my father-in-law who is suffering from late stage Alzheimer's and my mother-in-law who suffers from RA and onset dementia as well as hearing loss, for which there are no caretaker funds, as I continue the fight here online to inform and help restore our amazing country. And finally I need to thank a core group of family, friends, and readers... all at a distance, who check in with me regularly. Plus, I must thank my furkids who have not left my side through this fight. You can see them at JustOneMorePet.
View all posts by Ask Marion →
This entry was posted in Books, Common Sense, Constitution, Freedom, History, Knowledge Is Power, Leadership, low-informed voters, manipulation of the public, Media, Patriotism, Politics, Wake Up, Watch the Other Hand, You Be the Judge and tagged Benghazi, Biden, Boehner, Boykin, Communist, cover-ups, Delta Force, destroying America, Dignity, Fast and Furious, Forced-Resignations, former presidents, generals, George Washington, Get Involved, grassroots, History, impeachment, IRS, judgement, leadership, lies, Marxists, McConnell, military, Nixon, NSA, Obama, Obamaland, Pelosi, Political Correctness, politics, presidential libraries, Progressives, Purges, Purging-Military, Rasputin, Reid, Republic, Resignation, Scancals, Valerie Jarrett, Valleley, Wake Up, warning, Watergate, WH, WND. Bookmark the permalink.