JoshuaPundit: Things just got even weirder.

President Obama is running scared, and just made the ObamaCare debacle even worse.

He’s caved in to demands of his fellow Democrats and is expected to announce shortly that White House is going to allow people to keep their existing insurance policies.

This comes right before a vote in the House is scheduled to vote on a Republican-sponsored bill that would do the same thing. Dozens of Democrats who face tough re-election fights next year were expected to vote in favor, would have forced Harry Reid and Senate Democrats to kill the bill or President Obama to veto it.

However, there are major problems with the ‘fix’.

Millions of Americans have already lost their policies, and if they’re now going to be able to get those policies back (and that by no means certain), the logistics of rewriting and reissuing those policies are going to be a nightmare. First off, it involves a huge expense for the insurance companies themselves, which is going to need to be passed on to consumers.

There’s also the problem of actuarial standards, by which insurance companies determine risk. For instance, if you had an existing policy but contracted cancer or a heart condition after you purchased it that was covered and then lost that coverage because of ObamaCare, what this presidential diktat does is to force the company to rewrite your policy at the old rate without accounting for your now pre-existing condition. That expense (and it will be huge) is going to be passed on to all consumers, and I frankly would be surprised if insurance companies didn’t take this to court.

Not only is the government now forcing individuals to buy a product sold by a private company using the IRS as a policing instrument, it is now attempting to force private companies to sell to individuals at a fixed and uneconomic price. To say this is unconstitutional is an understatement.

Finally, there’s the problem of ObamaCare itself. The entire Ponzi scheme was not particularly a health care bill, but a redistributive tax on the middle class to subsidize people the regime feels are more deserving.It was based on people currently holding health insurance to pay increases in their premiums of anywhere from 3 to 10 times more than they were paying and accept increased coverage with higher co-pay and larger deductibles in order to fund the subsidies, policies for people with pre-existing conditions, one size fits all comprehensive benefits for people who neither need or want them, insurance for illegal aliens, the waivers for the president’s political allies, and the huge bureaucracy the entire program involves.

If these same people are now going to be allowed to return to their previous policies at the same rate, how is ObamaCare going to be funded? Is the president going to come back to Congress and ask for more money to pay for it? I doubt they’ll go with it, but he may. If he does, that adds yet another lie to the president’s already considerable portfolio – that ObamaCare was going to reduce the deficit.

Anyone who did the math knew that already, but now it’s simply going to become a lot more obvious.

This is a political band-aid designed to try and rescue the president’s fellow Democrats from facing up to this next year. Unfortunately, the underlying problems of ObamaCare are only going to worsen because of it, the train wreck is going to continue and the Democrats who voted for it are going to have to face the music.
Those of you who refer to yourselves as ‘progressives’ ought to think about your support for this president. For two years, he had an ironclad majority in congress and could have done pretty much whatever he wanted. Fortunately for the rest of us, he settled for a tyrannical and unworkable  ObamaCare law, a bogus ‘stimulus’ designed to pay off his political allies and lots of parties, five star luxury vacations  and golf.

UPDATE: Oh, this is precious! It’s even worse than I thought.  In his remarks, the president is NOT going to address the millions who lost their coverage,had their hours cut or were laid off because of ObamaCare.

And he is still refusing to change the ObamaCare regulations  to allow all existing  health insurance plans to be  grandfathered so they are legal under Obamacare’s  requirements…’if yu like you plan, you can keep it’.

No, instead of that, the president  saying that the IRS will use “enforcement discretion” to allow  health insurance plans that don’t meet ObaamCare’s requirements to be able to still be sold in the future.  In other words,  the Obama administration might not enforce the penalty on individuals for not having eligible health insurance plans and they’ll  now allow the insurance companies to still sell plans that are illegal to sell  under Obamacare! And only through 2014, after which the midterms will be over.

“I don’t see within the law how they can do this administratively,” said Speaker John Boehner in a press conference on Capitol Hill. “No one can identify anything the president could do administratively to keep his pledge that would be both legal and effective.”

He’s got that right. And he could have adding constitutional to the mix. You can’t pass a law and then arbitrarily decide to pick what parts you enforce to benefit your party politically. Not to mention the fact that the insurance companies are going to balk at issuing policies that are illegal but that the Obama Administration might decide not to penalize them for. And that they will have to cancel in a year’s time, once the elections are over.

This is not only illegal, it’ stupid. And that’s a fatal combination.

Remember Landrieu’s words and vote out anyone who voted for ObamaCare or supports it!! 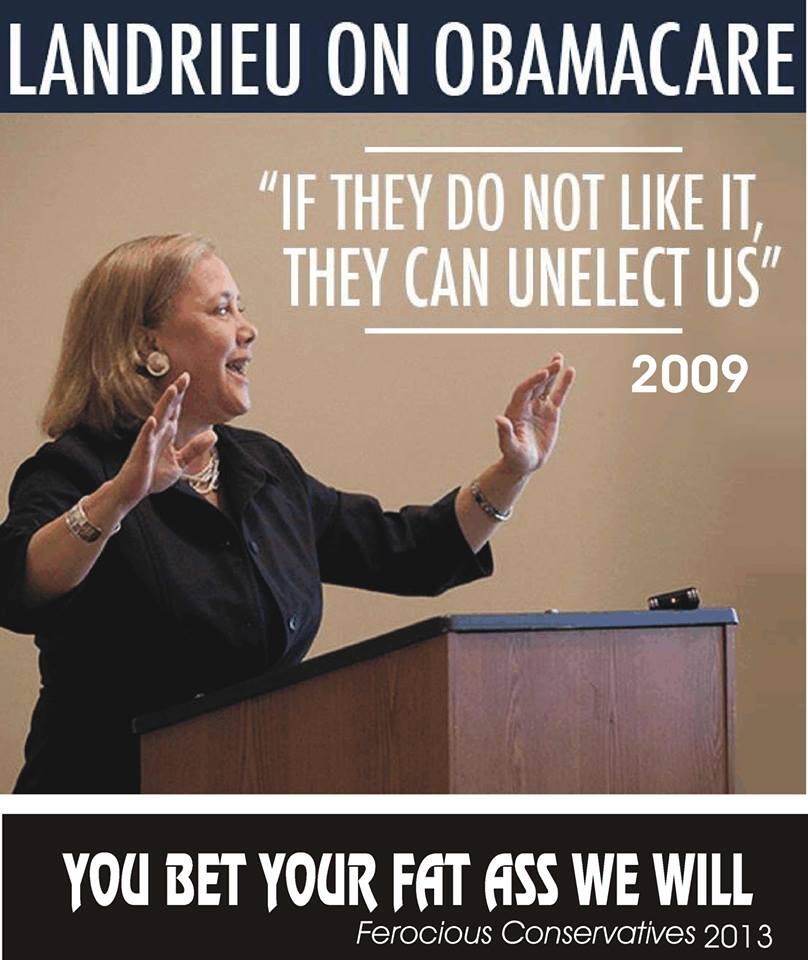 I am a babyboomer and empty nester who savors every moment of my past and believes that it is the responsibility of each of us in my generation and Americans in general to make sure that America is as good or even a better place for future generations as it was for us. So far... we haven't done very well!! Favorite Quotes: "The first 50 years are to build and acquire; the second 50 are to leave your legacy"; "Do something that scares you every day!"; "The journey in between what you once were and who you are becoming is where the dance of life really takes place". At age 62 I find myself fighting inoperable uterine Cancer and thanks to the man upstairs and the prayers from so many people including many of my readers from AskMarion and JustOneMorePet... I'm beating it. After losing our business because of the economy and factors related to the re-election of President Obama in 2012 followed by 16-mos of job hunting, my architect-trained husband is working as a trucker and has only been home approximately 5-days a month since I was diagnosed, which has made everything more difficult and often lonely... plus funds are tight. Our family medical deductible is 12K per year for two of us; thank you ObamaCare. But thanks to donations from so many of you, we are making ends meet as I go through treatment while taking care of my father-in-law who is suffering from late stage Alzheimer's and my mother-in-law who suffers from RA and onset dementia as well as hearing loss, for which there are no caretaker funds, as I continue the fight here online to inform and help restore our amazing country. And finally I need to thank a core group of family, friends, and readers... all at a distance, who check in with me regularly. Plus, I must thank my furkids who have not left my side through this fight. You can see them at JustOneMorePet.
View all posts by Ask Marion →
This entry was posted in Asshats, Get Involved, Health and wellness, Knowledge Is Power, low-informed voters, manipulation of the public, Stand Up, Wake Up, Watch the Other Hand and tagged 2014 Election, ACA, Boehner, Election 2016, Landrieu, Liar in Chief, lies, Obama, ObamaCare, PPACA, speeches. Bookmark the permalink.

1 Response to Breaking: The Chaos Deepens As Obama Panics – Now Says You Can Keep Existing Policies