Senator Ted Cruz: A Man For The People & A Country In Extreme Jeopardy – CFP 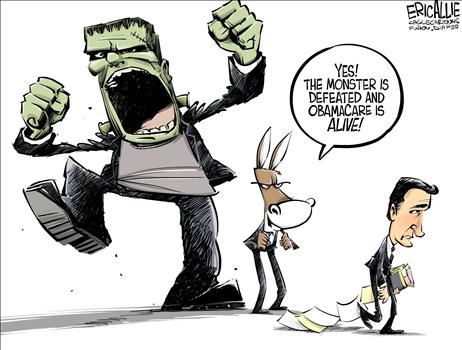 Senator Ted Cruz: A Man For The People & A Country In Extreme Jeopardy

The fear and hatred of Ted Cruz now exploding from the Left for this singularly brilliant and courageous man in the US Congress is matched and exceeded only by the patent disdain and loathing from the fearful, dull and testicularly-challenged Republican “leadership.”

The good senator is now being vilified both in Congress and by those who hold “commentator” positions in the always-left-wherever-one-looks inaptly-named “mainstream” media. Note: Hmmm. As I recall, the same thing happened to Ronald Reagan.

During his 21 hour and 18 minute dissertation to the American people and his own colleagues, Cruz ably defended his position against (despite the illegal and unconstitutional shenanigans of the now-disgraced SCOTUS Chief Justice John Roberts’ rewrite of the ObamaCare bill so that he could support it) ObamaCare’s removal of natural rights by quoting from the United States Constitution, the writings of the original intent of liberties (both economic and social) and empowerment for the people of this land by our ancestral founding fathers and mothers and even read from an outstanding essay “The Americans Who Risked Everything” written by the father of Rush Limbaugh. Cruz brought this information to the forefront. This is information on our US history that US Government schools no longer teach and, in fact, actively suppress from being taught to school children. Said teaching of actual factual and truthful events was replaced decades ago by a Marxist/anti-American/anti-liberty indoctrination system that now even includes the insidious anti-educative programs referred to as “Common Core.”

As of this morning, Sen. Cruz is still being belittled, denigrated and disparaged by the now fully-out-of-the-closet ObamaGov US Communist press, Democrats and RINOs in Congress. Democrats and Communists hate this man. That’s understood. Neither of those groups support either the truth or those who tell it. RINOs, however, despise Senator Cruz because, by telling said truth, he brings their own short-comings—if not abject corruption—into the light of day…so all can see. Those of the Sen. John McCain ilk came out of that faux conservative and anti-US Republic long ago. However, for those who followed and supported the ever-bombastic, pro-Islam and, apparently, pro-ObamaCare Rep. Peter King (R-NY) it has come as a bit of a shock. But, then, King has hinted he may run for POTUS in 2016. An honorable and extraordinary man like Sen. Ted Cruz must scare him almost to distraction. But, then Sen. Cruz is scaring a lot of the political “elite” ruling class these days…by speaking the truth and making certain the American people understand it.

Sen. Cruz tells the truth that both political parties in this country have failed the people. In order to gain more and more power, members of both parties have all but eliminated We-the-People from our own government. And, by leaving the running of government solely to others, We-the-People have abrogated our own checks and balances responsibilities and allowed it to happen. Via our lack of attention, we have allowed our elected officials to reach the point where they are now ruling over us…not governing. US laws are being broken daily, now, by all 3 branches of the federal government and the US Constitution was thrown out by them years ago. They now rule only to gain more power and wealth; both of which they have now openly and unceremoniously stolen from us. We will never get it back unless we fight for it. Each day that we fail to act and, also, kick the can down the road our rulers gain more illegal authority over us. This is how dictatorships, oligarchies and police-slave states are created. We are now well into the implementation phase of all. If we are no longer willing to stand up and support men and women with the tenacity, integrity, honor, intelligence and passion for our Constitution as does Senator Ted Cruz, then perhaps we don’t deserve to survive as a country after all.

“Therefore say to them, ‘This is the nation that has not obeyed the LORD its God or responded to correction. Truth has perished; it has vanished from their lips‘.”—Jeremiah 7: 27-28

Senator Cruz belittled, denigrated and disparaged by the now fully-out-of-the-closet ObamaGov US Communist press, Democrats and RINOs… Out of fear!!!  The Progressives and RINOs from both parties do this every time a leader willing to stand-up for the American People and the Constitution rises up

Now Is the Time For Americans to Stand Up… It’s Time… Out With the Old, In With the New

I am a babyboomer and empty nester who savors every moment of my past and believes that it is the responsibility of each of us in my generation and Americans in general to make sure that America is as good or even a better place for future generations as it was for us. So far... we haven't done very well!! Favorite Quotes: "The first 50 years are to build and acquire; the second 50 are to leave your legacy"; "Do something that scares you every day!"; "The journey in between what you once were and who you are becoming is where the dance of life really takes place". At age 62 I find myself fighting inoperable uterine Cancer and thanks to the man upstairs and the prayers from so many people including many of my readers from AskMarion and JustOneMorePet... I'm beating it. After losing our business because of the economy and factors related to the re-election of President Obama in 2012 followed by 16-mos of job hunting, my architect-trained husband is working as a trucker and has only been home approximately 5-days a month since I was diagnosed, which has made everything more difficult and often lonely... plus funds are tight. Our family medical deductible is 12K per year for two of us; thank you ObamaCare. But thanks to donations from so many of you, we are making ends meet as I go through treatment while taking care of my father-in-law who is suffering from late stage Alzheimer's and my mother-in-law who suffers from RA and onset dementia as well as hearing loss, for which there are no caretaker funds, as I continue the fight here online to inform and help restore our amazing country. And finally I need to thank a core group of family, friends, and readers... all at a distance, who check in with me regularly. Plus, I must thank my furkids who have not left my side through this fight. You can see them at JustOneMorePet.
View all posts by Ask Marion →
This entry was posted in Asshats, Economy and Money, Get Involved, Health and wellness, Knowledge Is Power, low-informed voters, manipulation of the public, Politics, Stand Up, Wake Up, Watch the Other Hand, You Be the Judge and tagged Alinsky tactics, CFP, Congress, conservatives vs. liberals, courage, creating chaos, creating crisis, democrat, demonization of enenmies, Eagles, fear, GOP, It Is Time, John McCain, liberal fear, lions, manipulation of the public, media, MSM, ObamaCare, Obamaland, Ostriches, Ostriches vs Eagles, progressivism, RINO's vs Lions, Rinos, Senate, Ted Cruz, Truth. Bookmark the permalink.

1 Response to Senator Ted Cruz: A Man For The People & A Country In Extreme Jeopardy – CFP