The Great Divider in Chief…

President Obama had a few things to say last Friday about the Zimmerman trial, about Trayvon Martin, and of course about race.

It astounds me that the full import of his remarks will pass unnoticed by the legacy press and indeed by most of America. Because  what the president had to say was nothing less than astounding.

It’s necessary to translate his remarks. As the president said, context is important.

President Obama started out after the pro forma remarks by upping the ante. Now, it’s not just that if he had a son he would have looked like Trayvon, but that 35 years ago he was Trayvon:

But I did want to just talk a little bit about context and how people have responded to it and how people are feeling. You know, when Trayvon Martin was first shot, I said that this could have been my son. Another way of saying that is Trayvon Martin could have been me 35 years ago. And when you think about why, in the African- American community at least, there’s a lot of pain around what happened here, I think it’s important to recognize that the African- American community is looking at this issue through a set of experiences and a history that — that doesn’t go away.

This is quite similar to the logic terrorism groupies try to foist on the unwary to justify terrorist activities; ‘well you know I certainly don’t condone violence but you have to understand their rage.’ Needless to say, that never works the other way around when objects of terrorism like the Israelis defend themselves. Any response is deemed ‘disproportionate’. And make no mistake. President Obama’s excusing the Trayvon riots on the basis of experiences and history is yet another important message, given that all important context. When he says “this experience and history doesn’t go away” he is not only justifying that violence but letting America know that no matter what, our country is guilty and no matter how much money or good will we expend, it will never be enough. It will never end.
Which means of course that according to President Obama, blacks of necessity have to nourish grievance for eternity and are not responsible for their own actions, no matter what.

That was President Obama’s central message. As I pointed out earlier, President Obama’s entire stance on this is political in nature and designed to get black voters to the polls in record numbers in 2014 to support his agenda. It’s worth remembering that it was Obama’s Department of Justice that actually played a significant part in orchestrating, funding and organizing the violent protests that made the Trayvon Martin shooting a national issue. Because there’s money and power to be had by nourishing that black sense of grievance.

President Obama’s attempt to embellish this message by whining about the indignities he supposedly suffered as a young black male..being watched when he went shopping in a store, walking across the street and hearing door locks on cars click, having women in an elevator clutch their purses tighter..’ was even more ridiculous coming from someone who has lived a life of privilege and ease his entire life and has known nothing but the best America has to offer.

Yes, this picture of the racist hell the president endured 35 years ago while going to the ultra elite Punahou Prep School in Hawaii tells it all, doesn’t it?

And I suppose Jesse Jackson was racist too when he said “There is nothing more painful to me at this stage in my life than to walk down the street and hear footsteps and start thinking about robbery. Then look around and see somebody white and feel relieved.” Talk about profiling!

The fact is that African Americans are 12.5% of the U.S. population but are overwhelmingly represented when it comes to to perpetrating crimes, and the first people that will admit it are blacks themselves who comprise the majority of victims. Blacks commit almost half of the homicides, and according to the 2010 census comprise 40.2 percent of all prison inmates. According to the FBI’s own statistics, blacks are 39% more likely to commit interracial crime than to be victims of it. Yet even with those numbers,  this president and his Department of Justice have never once seen fit to intervene or publicly insert themselves in any matter where a white person was the victim. In fact, if we believe J. Christian Adams who used to work there, this is a deliberate policy, especially in the DOJ’s civil rights division.

While President Obama briefly acknowledged the dysfunction in much of black American culture, that was, of course, someone else’s fault. He blamed the violence that occurs in poor black neighborhoods around the country on ‘a very violent past in this country’ and the poverty and social disorder on ‘a very difficult history’.

This is merely a sophisticated version of the nonsense peddled by race pimps like the president’s intimate friend Al Sharpton, shaking down the rubes for another donation.

I’m tired of hearing it, frankly

Lots of people have come to America from many different backgrounds and races, in many cases not by choice but because it was one of the few place that would let them in or that they could scrape up the funds to get to. The Irish, the Italians, the Poles, the Jews, the Armenians, the Chinese, the Japanese, the Cubans, the Vietnamese, blacks from the Caribbean and many others all came here in impoverished circumstances. Many of them arrived with literally nothing, did not speak English and faced severe prejudice from the Americans already established here. Some of them had faced horrors in their home countries that make the black experience in America look tame by comparison.

Yet they persevered and prospered. They worked at whatever menial jobs were available, educated themselves and their children, and sometimes they managed to scrimp and save a little and risked their scanty capital on small businesses where they often worked long hours. They acknowledged the bigotry they were confronted with but they largely ignored it – because this was America, where they could see with their own eyes that with hard work and a little luck anything was possible, if not for themselves, then for their children. If they were barred from the elite schools, employment in certain fields and from other institutions by bigotry and quotas, they found another way.They refused to embrace the politics of grievance, because they instinctively realized innately how degrading it was to the freedom they came to America to find and to their own human dignity, even if they might not have phrased it quite that way themselves.

They ‘re living proof that anyone who lets racism or anti-semitism or bigotry keep him or her from achieving to the limits of ability is a moral coward looking for an alibi. This is as true as it ever was, it has no color line and in spite of President Obama’s best efforts to spin this basic truth, people still prove it every day.

You know what the real tragedy is? As America’s first black president Barack Obama was in a unique position to build bridges and heal much of what remained of America’s racial divide. He enjoyed popularity and trust from both whites and blacks, and had actually led the American people to believe that we were on the way to realizing Dr. Martin Luther King Jr’s dream of judging people by the content of their character rather than the color of their skin. Had he made that his criteria, had he kept the promise he made in 2008 to be the president of all the people, things would be very different now.
Instead, he cynically chose to widen those divides and nourish the industry of grievance for his own political purposes. He chose to become the Great Divider. And that will ultimately be his legacy. No justice, no peace indeed. 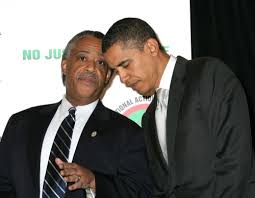 And the Race-Baiting Continues… Divide and Conquer

What Happened to the ‘Post-Racial America’ Dream?

Race As Politics And Politics As Race – The Slave Mentality Revisited

Shhhh! We can’’t talk about race!

You Are Not Trayvon Martin

So Just How Hard Should Zimmerman Have Allowed Martin to Beat Him?

Flashback: 5 Racially Motivated Violent Crimes That Weren’t Reported in the Media After the Trayvon Martin Case

I am a babyboomer and empty nester who savors every moment of my past and believes that it is the responsibility of each of us in my generation and Americans in general to make sure that America is as good or even a better place for future generations as it was for us. So far... we haven't done very well!! Favorite Quotes: "The first 50 years are to build and acquire; the second 50 are to leave your legacy"; "Do something that scares you every day!"; "The journey in between what you once were and who you are becoming is where the dance of life really takes place". At age 62 I find myself fighting inoperable uterine Cancer and thanks to the man upstairs and the prayers from so many people including many of my readers from AskMarion and JustOneMorePet... I'm beating it. After losing our business because of the economy and factors related to the re-election of President Obama in 2012 followed by 16-mos of job hunting, my architect-trained husband is working as a trucker and has only been home approximately 5-days a month since I was diagnosed, which has made everything more difficult and often lonely... plus funds are tight. Our family medical deductible is 12K per year for two of us; thank you ObamaCare. But thanks to donations from so many of you, we are making ends meet as I go through treatment while taking care of my father-in-law who is suffering from late stage Alzheimer's and my mother-in-law who suffers from RA and onset dementia as well as hearing loss, for which there are no caretaker funds, as I continue the fight here online to inform and help restore our amazing country. And finally I need to thank a core group of family, friends, and readers... all at a distance, who check in with me regularly. Plus, I must thank my furkids who have not left my side through this fight. You can see them at JustOneMorePet.
View all posts by Ask Marion →
This entry was posted in Choices, Communication, Knowledge Is Power, low-informed voters, manipulation of the public, Politics, Wake Up, Watch the Other Hand, You Be the Judge. Bookmark the permalink.

2 Responses to The Great Divider in Chief…