Yes, Big Sis is getting out of DC while the getting is good…  U.S. Homeland Security Secretary Janet Napolitano confirmed (today) Friday 07.12.13) that she will leave her position to lead the University of California and thanked President Barack Obama for the chance to serve the country as part of his Cabinet.

With things like Fast and Furious, the NSA scandal, the AP scandal and numerous others brewing around the Obama Administration, seems she’s decided it might be smarter to get out of Dodge for awhile.

And where’s she headed? Where do all failed political figures from Democrat administrations go? If not to the media, than to academia… the place where they can make sure to turn out another crop of Progressives.

“I will be nominated as the next president of the University of California to play a role in educating our nation’s next generation of leaders,” she said in a statement. “I thank President Obama for the chance to serve our nation during this important chapter in our history.”

Big Sis has been named to be the next president of the 10 campus University of California system, at three times the salary she now makes.  Her proposed salary has not been released, but current U.C. President Mark G. Yudof makes $591,000, according to the U.C. website, significantly more than Napolitano’s $200,000 Cabinet position.

Napolitano’s nomination by a committee of UC regents came after a secretive process that insiders said focused on her as a high-profile, although untraditional, candidate who has led large public agencies and shown a strong interest in improving education, the Los Angeles Times reported.

Being a UCLA alum, my heart sank as I heard the news.  It took be back to the Angela Davis years…

UC officials believe that her Cabinet experiences –- which include helping to lead responses to hurricanes and tornadoes and overseeing some anti-terrorism measures — will help UC administer its federal energy and nuclear weapons labs and aid its federally funded research in medicine and other areas. […}

Robert Powell, the chairman of UC’s system-wide faculty Senate and who consulted on the UC search, said Napolitano stood out among the more than 300 potential candidates. She “has demonstrated an outstanding ability to deal with complex organizations under demanding circumstances,” he said.

Acknowledging that she will be a departure from UC’s traditions of having a president with strong records in campus administration or academic research, he stressed that her political skills will be important. “When she goes to Sacramento, clearly the conversations will be on a different plane,” he said.

Yes, it’s all about the Federal and State ‘benjamins’.

Interestingly enough, a Times poll at the link showed that 77% of the locals think she’s a bad choice to head the UC system, as of 9 AM PST this morning. 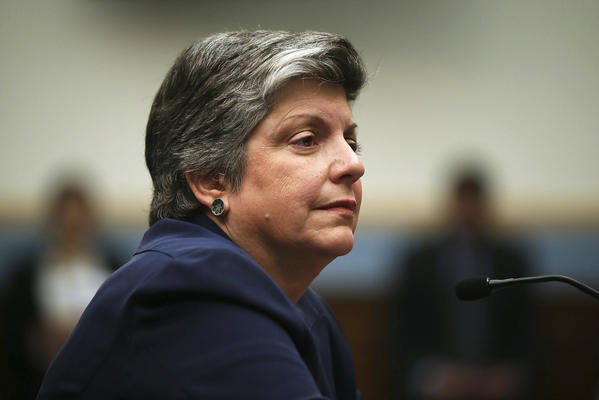 While it will be a fresh breath of air to be rid of her, we can be assured that President Obama will certainly pick someone even worse to fill her slot.

I am a babyboomer and empty nester who savors every moment of my past and believes that it is the responsibility of each of us in my generation and Americans in general to make sure that America is as good or even a better place for future generations as it was for us. So far... we haven't done very well!! Favorite Quotes: "The first 50 years are to build and acquire; the second 50 are to leave your legacy"; "Do something that scares you every day!"; "The journey in between what you once were and who you are becoming is where the dance of life really takes place". At age 62 I find myself fighting inoperable uterine Cancer and thanks to the man upstairs and the prayers from so many people including many of my readers from AskMarion and JustOneMorePet... I'm beating it. After losing our business because of the economy and factors related to the re-election of President Obama in 2012 followed by 16-mos of job hunting, my architect-trained husband is working as a trucker and has only been home approximately 5-days a month since I was diagnosed, which has made everything more difficult and often lonely... plus funds are tight. Our family medical deductible is 12K per year for two of us; thank you ObamaCare. But thanks to donations from so many of you, we are making ends meet as I go through treatment while taking care of my father-in-law who is suffering from late stage Alzheimer's and my mother-in-law who suffers from RA and onset dementia as well as hearing loss, for which there are no caretaker funds, as I continue the fight here online to inform and help restore our amazing country. And finally I need to thank a core group of family, friends, and readers... all at a distance, who check in with me regularly. Plus, I must thank my furkids who have not left my side through this fight. You can see them at JustOneMorePet.
View all posts by Ask Marion →
This entry was posted in Dumbing Down of America, News and politics, You Be the Judge. Bookmark the permalink.