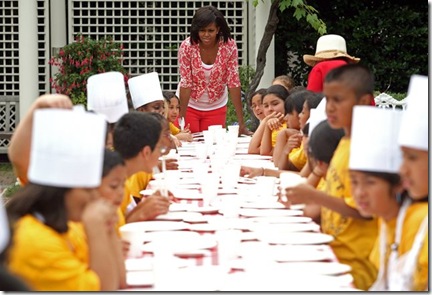 “[Food service manager Nicky] Boehm and her staff worked hard to implement the new regulations, but there were just too many problems and too many foods that students did not like and would not purchase,” said Assistant Superintendent Chris Abdoo about the National School Lunch Program in a statement reported by EAGNews.org. “Students complained of being hungry with these lunches and the district lost money.”

More Fruit, Fewer Fries: Michelle Obama Might Have Taken the ‘Happy’ Out of McDonald’s Happy Meals

(Reuters) – President Barack Obama likes burgers, hot dogs and such, but when it came time to answer a kid journalist’s question about his favorite food, broccoli was the first word that sprang from his lips.

This revelation came on Tuesday at a White House event that recognized children who won a healthy recipe contest, as part of first lady Michelle Obama’s anti-obesity campaign.

Having fun with the children, Obama agreed to take two questions from the journalists among them. The first asked what was Obama’s favorite food. Broccoli was the presidential reply, according to a White House aide.

This from a politician who has literally eaten his way across the country: Burgers in a Washington suburb with Russian Prime Minister Dmitry Medvedev; ribs in Asheville, North Carolina; hot dogs at a basketball game in Dayton, Ohio; and a tasty pastry called a kringle in Wisconsin.

Obama’s disclosure puts him starkly at odds with the culinary tastes of George H.W. Bush, who as president famously declared his dislike for broccoli.

“And I haven’t liked it since I was a little kid and my mother made me eat it. And I’m president of the United States, and I’m not going to eat any more broccoli!” Bush said in 1990.

Steamed broccoli growers shipped thousands of pounds of broccoli to the White House in protest, and the vegetable was farmed out to homeless shelters.

“Food can be fun. It can be healthy,” Obama said. “You are setting up habits that are going to be great your entire life.”

He joked that he’s not much of a cook. “(In) my family, when they cooked vegetables, they were all boiled.” Since then, he said, he has learned that healthy food can also taste good.

I am a babyboomer and empty nester who savors every moment of my past and believes that it is the responsibility of each of us in my generation and Americans in general to make sure that America is as good or even a better place for future generations as it was for us. So far... we haven't done very well!! Favorite Quotes: "The first 50 years are to build and acquire; the second 50 are to leave your legacy"; "Do something that scares you every day!"; "The journey in between what you once were and who you are becoming is where the dance of life really takes place". At age 62 I find myself fighting inoperable uterine Cancer and thanks to the man upstairs and the prayers from so many people including many of my readers from AskMarion and JustOneMorePet... I'm beating it. After losing our business because of the economy and factors related to the re-election of President Obama in 2012 followed by 16-mos of job hunting, my architect-trained husband is working as a trucker and has only been home approximately 5-days a month since I was diagnosed, which has made everything more difficult and often lonely... plus funds are tight. Our family medical deductible is 12K per year for two of us; thank you ObamaCare. But thanks to donations from so many of you, we are making ends meet as I go through treatment while taking care of my father-in-law who is suffering from late stage Alzheimer's and my mother-in-law who suffers from RA and onset dementia as well as hearing loss, for which there are no caretaker funds, as I continue the fight here online to inform and help restore our amazing country. And finally I need to thank a core group of family, friends, and readers... all at a distance, who check in with me regularly. Plus, I must thank my furkids who have not left my side through this fight. You can see them at JustOneMorePet.
View all posts by Ask Marion →
This entry was posted in Choices, Family and Friends, Food and drink, Freedom, Health and wellness, Knowledge Is Power, manipulation of the public, News and politics, You Be the Judge. Bookmark the permalink.