Speaking at the African First Ladies Summit in Tanzania last Tuesday (July 2nd, 2013), FLOTUS Michelle Obama while at an interview with former First Lady Laura Bush and NPR’s Cokie Roberts said that because it can sometimes be a little confining, living in the White House is sometimes like living in a “really nice prison”…

Yes you heard that right, as most Americans were beginning their 4th of July weekend, the highlight of the American Patriotic Season, America’s First Lady told Cookie Roberts during the event in Tanzania on empowering women that living in the White House was sometimes like living in a prison, albeit a really nice prison.  She said “there are prison elements to it, but it’s a really nice prison.”

“She was joking about life in the White House” is now the official spin, of course.  And the U.S. mainstream media, aided by a long holiday weekend, certainly buried the comments and made it a non-story.

But whether this was meant to be funny or not, it came across as another one of the “This is the first time I have ever been proud of America” comments and moments for Mrs. Obama.  She has had many wellspring statement moments, when her underlying feelings about America, middle America, White America, and now the White House bubble up to the surface, when she is unscripted.

It is true that “Martha Washington, our first First Lady, once wrote to her niece in the first year that she was First Lady, that she felt like a ‘Chief State Prisoner’, but those were very different times and conditions and there was no White House… so there really is no comparison.  Let us not forget that the first two presidents did not live in the White House.  Third U.S. President John Adams and his First lady Abigail Adams were the first to occupy the White House.

When I grew up there was an amusement park in Santa Monica, CA called POP… Pacific Ocean Park, of which I have great memories, but from here on forward POP will conjure up thoughts of ‘Prisoner on Pennsylvania’ Ave, complete with fun house antics and amusement at the taxpayers expense.

Let us not forget the “Let Them Eat Cake” Adventure

As well as some of POP’s favorites like: Who’s Really In-Charge, Where Are the Documents Mystery 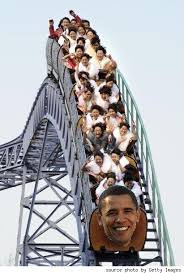 One can certainly see how living in the White House can somehow feel like they are in a prison… can’t we?!?

Must be why they cancelled those White House tours…

I am a babyboomer and empty nester who savors every moment of my past and believes that it is the responsibility of each of us in my generation and Americans in general to make sure that America is as good or even a better place for future generations as it was for us. So far... we haven't done very well!! Favorite Quotes: "The first 50 years are to build and acquire; the second 50 are to leave your legacy"; "Do something that scares you every day!"; "The journey in between what you once were and who you are becoming is where the dance of life really takes place". At age 62 I find myself fighting inoperable uterine Cancer and thanks to the man upstairs and the prayers from so many people including many of my readers from AskMarion and JustOneMorePet... I'm beating it. After losing our business because of the economy and factors related to the re-election of President Obama in 2012 followed by 16-mos of job hunting, my architect-trained husband is working as a trucker and has only been home approximately 5-days a month since I was diagnosed, which has made everything more difficult and often lonely... plus funds are tight. Our family medical deductible is 12K per year for two of us; thank you ObamaCare. But thanks to donations from so many of you, we are making ends meet as I go through treatment while taking care of my father-in-law who is suffering from late stage Alzheimer's and my mother-in-law who suffers from RA and onset dementia as well as hearing loss, for which there are no caretaker funds, as I continue the fight here online to inform and help restore our amazing country. And finally I need to thank a core group of family, friends, and readers... all at a distance, who check in with me regularly. Plus, I must thank my furkids who have not left my side through this fight. You can see them at JustOneMorePet.
View all posts by Ask Marion →
This entry was posted in Choices, Knowledge Is Power, low-informed voters, manipulation of the public, News and politics, Thoughts ..., Wake Up, Watch the Other Hand, You Be the Judge. Bookmark the permalink.