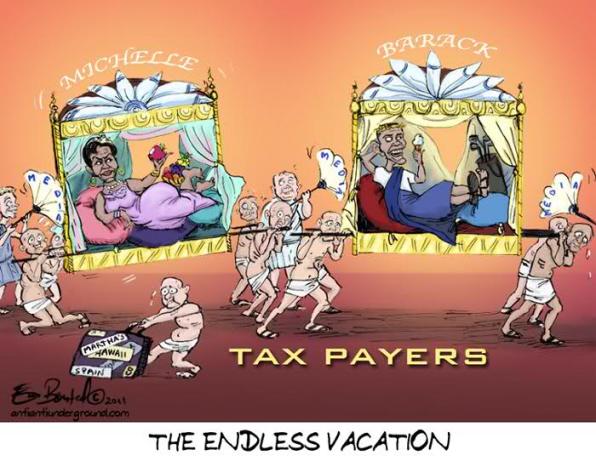 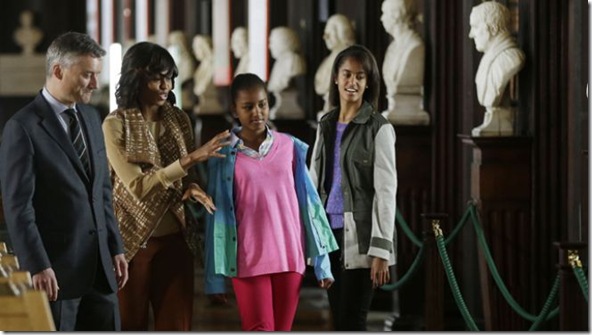 June 17, 2013: US first lady Michelle Obama, center, with her daughters Sasha, and Malia, are escorted by Patrick Prendergast, far left, President/Provost of Trinity College, during their visit to the Old Library at Trinity College, in Dublin, Ireland. (AP photo/Fox)  Girls seemingly not impressed so far with their extra (2-day) $5Million dollar taxpayer paid side trip to Ireland, as millions of Americans are still unemployed, under-employed or have left the market place completely out of discouragement.  But what the heck… Mama got her new wardrobe (about which articles are being pulled from the Internet quicker than anyone can read them), so let them eat cake~

“President Obama’s trip this month to Africa, with the first family tagging along, is projected to cost taxpayers as much as $100 million, sparking criticism as the federal government scrimps along during sequester-related budget cuts.

Among the related costs will be fighter jets; hundreds of Secret Service agents; a Navy ship with a full trauma center; and military cargo planes to bring 56 vehicles including 14 limousines and three trucks loaded with sheets of bullet­proof glass to cover the windows of the hotels where the first family will stay. The details were reported by The Washington Post, based on a confidential planning document.”

Understandably, the President has to travel and that accounts for much of the spending, but where is the shared sacrifice? When school kids can’t take White House tours the least the first family could do is show some solidarity and at least a little restraint.  Oh… I almost forgot, ‘they’ did say they wanted us to feel the pain of sequestration… after all, how else can they keep blaming it on the Republicans?

Summertime, and the livin’ is easy! At least for some of us.

Just a little 8 day excursion with family,entourage and friends at a mere $12 million plus per day.

I am a babyboomer and empty nester who savors every moment of my past and believes that it is the responsibility of each of us in my generation and Americans in general to make sure that America is as good or even a better place for future generations as it was for us. So far... we haven't done very well!! Favorite Quotes: "The first 50 years are to build and acquire; the second 50 are to leave your legacy"; "Do something that scares you every day!"; "The journey in between what you once were and who you are becoming is where the dance of life really takes place". At age 62 I find myself fighting inoperable uterine Cancer and thanks to the man upstairs and the prayers from so many people including many of my readers from AskMarion and JustOneMorePet... I'm beating it. After losing our business because of the economy and factors related to the re-election of President Obama in 2012 followed by 16-mos of job hunting, my architect-trained husband is working as a trucker and has only been home approximately 5-days a month since I was diagnosed, which has made everything more difficult and often lonely... plus funds are tight. Our family medical deductible is 12K per year for two of us; thank you ObamaCare. But thanks to donations from so many of you, we are making ends meet as I go through treatment while taking care of my father-in-law who is suffering from late stage Alzheimer's and my mother-in-law who suffers from RA and onset dementia as well as hearing loss, for which there are no caretaker funds, as I continue the fight here online to inform and help restore our amazing country. And finally I need to thank a core group of family, friends, and readers... all at a distance, who check in with me regularly. Plus, I must thank my furkids who have not left my side through this fight. You can see them at JustOneMorePet.
View all posts by Ask Marion →
This entry was posted in Asshats, Choices, Common Sense, Communication, Knowledge Is Power, low-informed voters, manipulation of the public, News and politics, Patriotism, Politics, Stand Up, Wake Up, Watch the Other Hand, Wisdom, You Be the Judge. Bookmark the permalink.