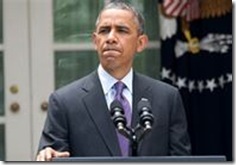 Washington (CNN) – President Barack Obama’s approval rating dropped eight percentage points over the past month, to 45%, the president’s lowest rating in more than a year and a half, according to a new national poll.

The CNN/ORC International survey released Monday morning comes as the White House has been reacting to controversies over a massive U.S. government surveillance program; the Internal Revenue Service’s targeting of tea party and other conservative groups who applied for tax-exempt status; the administration’s handling of last September’s attack in Benghazi that left the U.S. ambassador to Libya and three other Americans dead; and the Justice Department’s secret collection of journalists’ phone records as part of a government investigation into classified leaks.

The poll indicates that for the first time in Obama’s presidency, half of the public says they don’t believe he is honest and trustworthy. And Americans are split on the controversial National Security Agency anti-terrorism program to record metadata on U.S. phone calls, but they support the NSA program that targets records of Internet usage by people in other countries. That doesn’t mean they necessarily like what is going on: Just over six in 10 believe that government is so large and powerful that it threatens the rights and freedoms of ordinary Americans.

A slight majority of those questioned in the poll, which was conducted Tuesday through Thursday of last week, disapprove of the actions of the man who leaked sensitive information about the NSA program. A similar number say Edward Snowden, who fled to Hong Kong, should be brought back to the United States and prosecuted.

What the approval drop means for Obama

The president’s approval rating stands at 45%, down from 53% in mid-May. And 54% say they disapprove of how Obama’s handling his job, up nine points from last month. It’s the first time in CNN polling since November 2011 that a majority of Americans have had a negative view of the president.

“The drop in Obama’s support is fueled by a dramatic 17-point decline over the past month among people under 30, who, along with black Americans, had been the most loyal part of the Obama coalition,” says CNN Polling Director Keating Holland.

What’s behind the drop?

“It is clear that revelations about NSA surveillance programs have damaged Obama’s standing with the public, although older controversies like the IRS matter may have begun to take their toll as well,” adds Holland.

Obama’s approval rating on terrorism, although still above 50%, has taken a 13-point hit since mid-May. By contrast, his approval rating on domestic issues such as the economy, immigration and the deficit only dropped by two to four points, within the poll’s sampling error.

The number of Americans who think he is honest has dropped nine points over the past month, to 49%. Fifty-seven percent of those questioned say they disagree with the president’s views on the size and power of the federal government, and 53% say he cannot manage the government effectively. Fifty-two percent say the president is a strong and decisive leader. That’s still a majority, but it’s down six points from last month.

Forty-three percent of the public says that the Obama administration has gone too far in restricting civil liberties to fight terrorism, with 38% saying the administration has been about right and 17% saying it has not gone far enough.

“That’s roughly the same reaction that the public had to the Bush administration in 2006 when the details of a similar program to gather phone records were made public,” says Holland.

As for Snowden, 52% disapprove of his actions, with 44% saying they approve of the leaks by the former government contractor. Fifty-four percent say the government should attempt to bring Snowden back to the U.S. and prosecute him for his actions.

Documents Snowden provided to journalists revealed the existence of the secret NSA programs to collect records of domestic telephone calls in the United States and the Internet activity of overseas residents. Snowden, who fled to Hong Kong, was fired from his position at the consulting firm Booz Allen Hamilton earlier this month. The FBI is investigating the leaks.

The poll was conducted for CNN by ORC International June 11 to 13, with 1,014 adults nationwide questioned by telephone. The survey’s overall sampling error is plus or minus three percentage points.